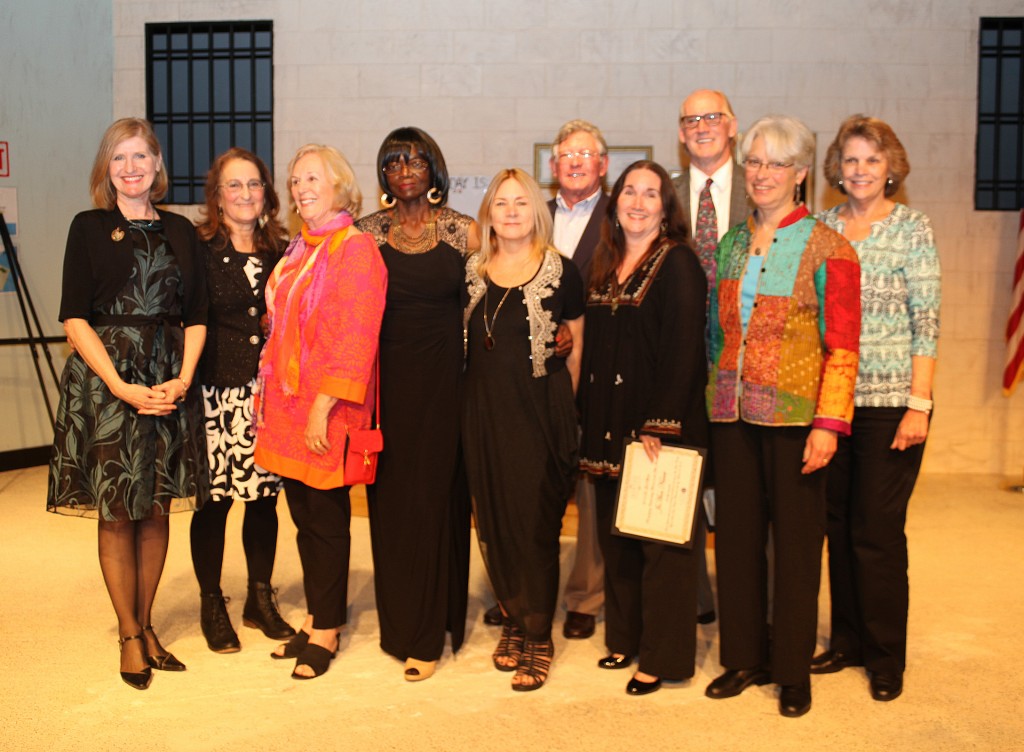 The event celebratedÂ and recognizedÂ the seven women chosen to receive the 2016 Dr. Gail PflasterÂ ROWITAÂ Recognizing Outstanding Women in the Arts (ROWITA) Award for their lifetime contributions to the arts in St. Johns County.

Brady has been involved in both visual and performing arts since childhood, first schooled in drawing, then going on to the theatre scene in Minneapolis and spending almost a decade as a professional singer performing in the US, Canada and Aruba. Holding three art degrees, Brady has for the past seven years been the Administrator for the St. Augustine Art Association where art, culture and history is showcased as part of our heritage. Never sitting still, she oversees new exhibitions, lectures, musical performances and Art Camp for children to name but a few activities to which she dedicates her energies.

Clough studied at FSU, Georgetown and Tulane before her studies were interrupted by a move to Europe where she became a full-time artist. With a BA in Studio Art and English, an MA is Medieval English Lit and a fellowship as an ABD Doctoral Candidate, she has been a professor and gallery owner before making her mosaic works her full-time passion for the past six years. Her work can be found in schools, offices, libraries, hospitals, municipal buildings and private homes. Her generosity, especially when it comes to children and art in public places, is widely known and appreciated.

Goldman has worn many hats as author, award winning journalist, freelance writer for national magazines and metropolitan newspapers and a respected voice on spiritual thinking. Serving as executive director and co-founder of Compassionate St Augustine, the Obelisk Art 450 project was a 24/7 effort for 18 months from a grass roots beginning and assembling a team of community leaders ultimately leading to both international and national recognition. Compassion through the Eyes of Children is an ongoing program enriching and educating the younger generations.

Masterâ€™s career is as rich as the many mediums with which she has worked from linoleum block printed fabric, antique beads, jewelry to large-scale mosaics including the historic map at our Visitorâ€™s Information Center, 3-tiered piece with 160 species of indigenous birds at the Bird Island Park Amphitheatre and coordinated a student mosaic project for the fountain at Flagler Collegeâ€™s new administration building.Â  Chosen to represent the City of St Augustine, she traveled to Aviles, Spain to create an obelisk for Compassion 450.Â  Founder of the 1stChildrenâ€™s Art Camp in the 80s, she is a partner at both Amiro galleries on Aviles Street and teaches master classes around the country.

Nance apprenticed at the Hyde Park Playhouse as a child where she worked with notable actors inspiring her to study voice and musical theatre at Florida School of the Arts and then earning a Bachelorâ€™s degree in Theatre at Flagler College during that departmentâ€™s infancy.Â  She had a radio career in the 80s and 90s both locally and in New England. Her work as a teacher has encouraged many students to pursue the arts and her drama department has won countless awards.Â  Outside of school she remains active in the theatre community, both performing and directing and singing at St Anastasia Catholic Church.

Parrish is known throughout the County and beyond as an accomplished artist, passionate art teacher, generous volunteer for many nonprofit organizations, and dedicated community activist. In addition to serving with EMMA, St. Augustine Art Association, St. Augustine Historical Society, St. Augustine Archaeological Association, and Rotary to list a few, she has designed playbills, brochures, hosted classes and most recently, written and illustrated her book, â€œLincolnville â€“ A Sketchbook Journal of St Augustineâ€™s Historic Neighborhood.â€ An ambassador of Lincolnville and a champion of the arts, her contributions to the arts community are on-going.

Williams-Collinsâ€™ name is perhaps not as familiar as some because she is always the face behind the camera. Thanks to her photography and poetry, she continues to preserve a St. Augustine history that might otherwise be lost forever. As a teacher she helped students find their own means of artistic expression. A native of St Augustine, her parents were avid photographers and she follows in the footsteps of Richard Twine and John Jackson. While photographing a building slated for demolition she found records of the Civil Rights Movement, a previously long lost archive of this important period.

The Dr Gail PflasterÂ ROWITAÂ is awarded each year to honor the contributions women have made to the artistic environment in St Johns County. It was founded by the late Dr. Pflaster, a local writer and committed arts supporter.

â€œThere was no one in the community celebrating our local women arts leaders, so Dr. Pflaster and I discussed what could be done to remedy that matter,â€ said Joy Dâ€™Elia, ROWITA committee member and former Program Coordinator for the St. Johns Cultural Council.

â€œThanks to her, weâ€™ve been celebrating women in the arts since 2009. I am constantly amazed and inspired by the women we have honored each year.â€

Saving the Earth one phone at a time

Working in the wireless sales industry for the last 18 years, John Cortese has seen enoughÂ cell phones thrown away to fill the St….