June 29 & June 30 at 7:30pm
July 1 at 2pm
KidzfACTory at Limelight Theatre
Florida School for the Deaf & Blind
207 San Marco Avenue, St. Augustine FL 32084
Tickets: https://web.ovationtix.com/trs/pr/992773Based on the legendary, multi-award-winning, musical comedy classic about rolling the dice and falling in love under the lights of Broadway.

Guys and Dolls JR. is an adaptation of the show considered by many to be the perfect musical comedy. Its namesake ran for 1,200 performances when it opened on Broadway in 1950 and won numerous Tony Awards, including Best Musical. Frank Loesser’s brassy, immortal score and witty book makes Guys and Dolls JR. a perennial crowd pleaser. 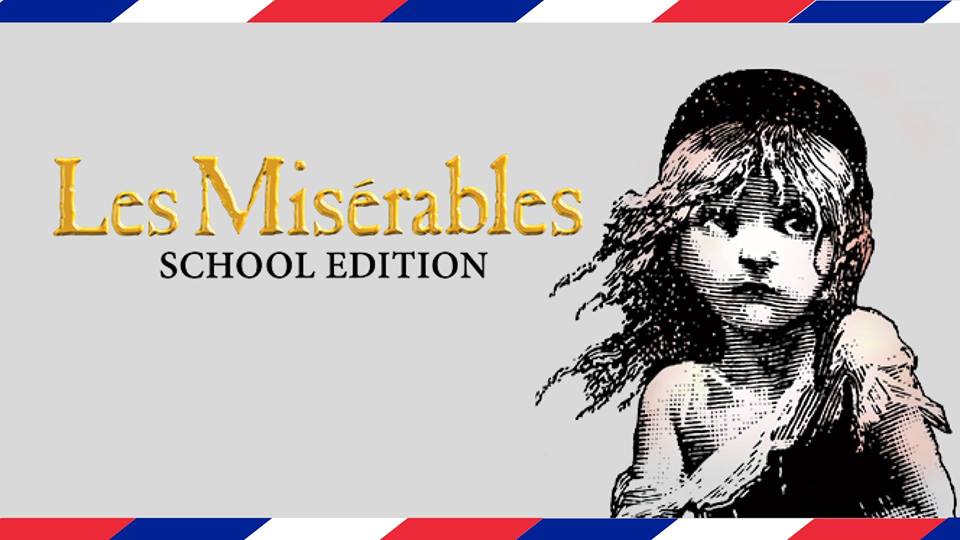 June 29 & June 30 at 7:30pm
July 1 at 2pm
Lewis Auditorium at Flagler College, 14 Granada St., downtown St. Augustine
Summer Musical TheatreCamp (Curtis Camp)
Tickets are $15 and can only be purchased at the door. Tickets are available at the door one hour prior to each performance.

Based in nineteenth century France, Jean Valjean is released from years of unjust imprisonment, but finds nothing in store for him but mistrust and mistreatment. He breaks his parole in hopes of starting a new life, initiating a lifelong struggle for redemption as he is relentlessly pursued by police inspector Javert, who refuses to believe Valjean can change his ways. Finally, during the Paris student uprising of 1832, Javert must confront his ideals after Valjean spares his life and saves that of the student revolutionary who has captured the heart of Valjean’s adopted daughter.

The show will take place at the the Lewis Auditorium at Flagler College. Tickets are $15 and can only be purchased at the door. 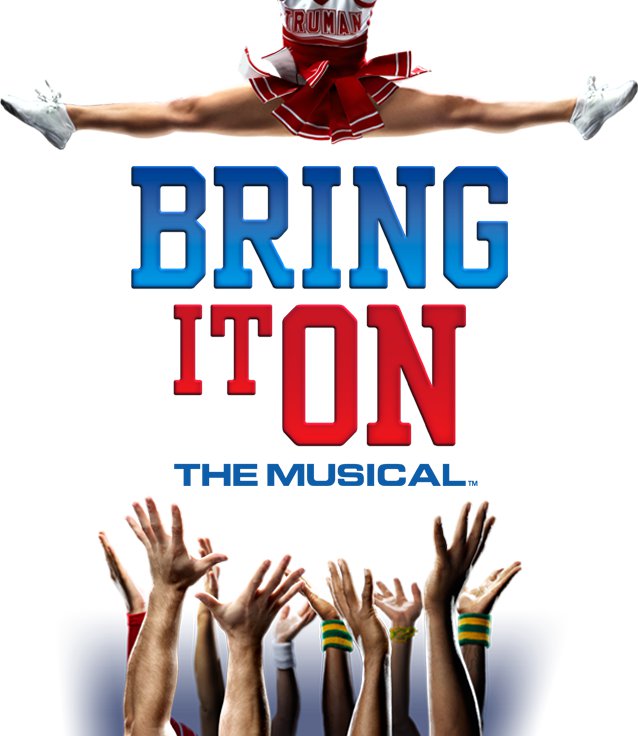 Bring it On The Musical

Bitingly relevant, sprinkled with sass and inspired by the hit film, Bring It On The Musical takes audiences on a high-flying journey that is filled with the complexities of friendship, jealousy, betrayal and forgiveness. Uniting some of the freshest and funniest creative minds on Broadway, Bring It On features an original story by Tony Award winner, Jeff Whitty (Avenue Q), music and lyrics by Tony Award-winning composer, Lin-Manuel Miranda (In the Heights, Hamilton), music by Pulitzer- and Tony Award-winning composer, Tom Kitt (Next to Normal), lyrics by Broadway lyricist, Amanda Green (High Fidelity), and was nominated for the Tony Award for Best Musical. Campbell is cheer-royalty at Truman High School and her senior year should prove the most cheertastic – she’s been named captain of the squad! But, an unexpected redistricting has forced her to spend her final year of high school at the neighboring hard-knock Jackson High School. Despite having the deck stacked against her, Campbell befriends the dance crew girls and, along with their headstrong and hardworking leader, Danielle, manages to form a powerhouse squad for the ultimate competition – the National Championships.

THIS SHOW CONTAINS ADULT LANGUAGE AND CONTENT. Recommended for middle school and up. All tickets $10.

**PERFORMANCE ON SUNDAY JULY 8 WILL BE INTERPRETED FOR THE DEAF and HOH COMMUNITY.

Roald Dahl’s timeless story of the world-famous candy man and his quest to find an heir is a golden ticket to adventure.

The delicious adventures experienced by Charlie Bucket on his visit to Willy Wonka’s mysterious chocolate factory light up the stage in this captivating adaptation of Roald Dahl’s fantastical tale. 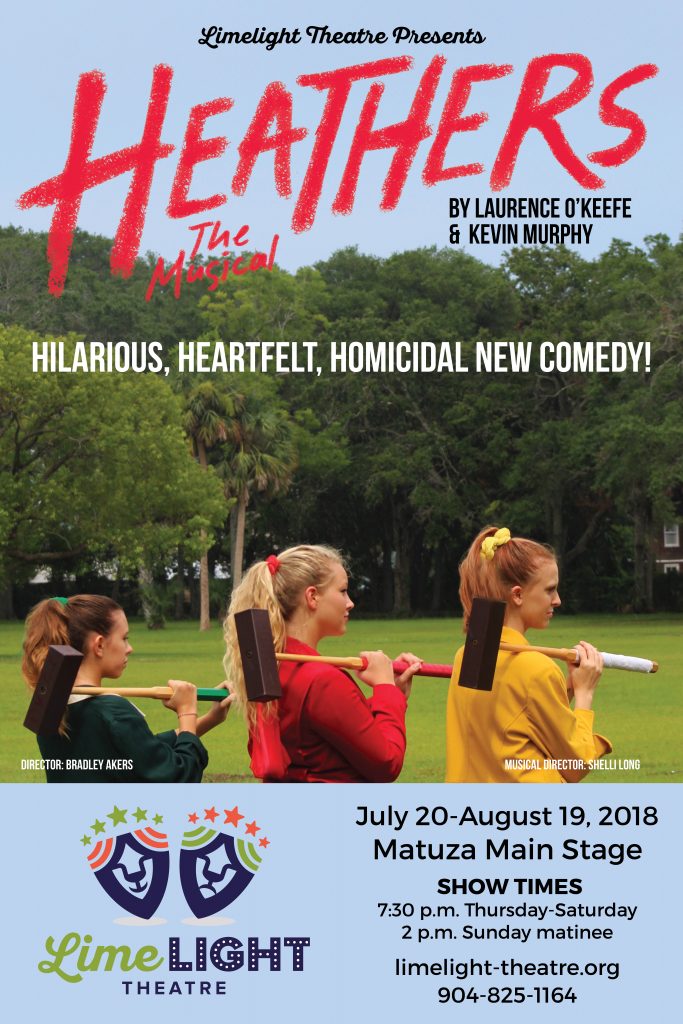 Nominee of a 2014 Off Broadway Alliance Award for Best New Musical, Heathers The Musical is a hilarious, heartfelt, and homicidal new comedy! 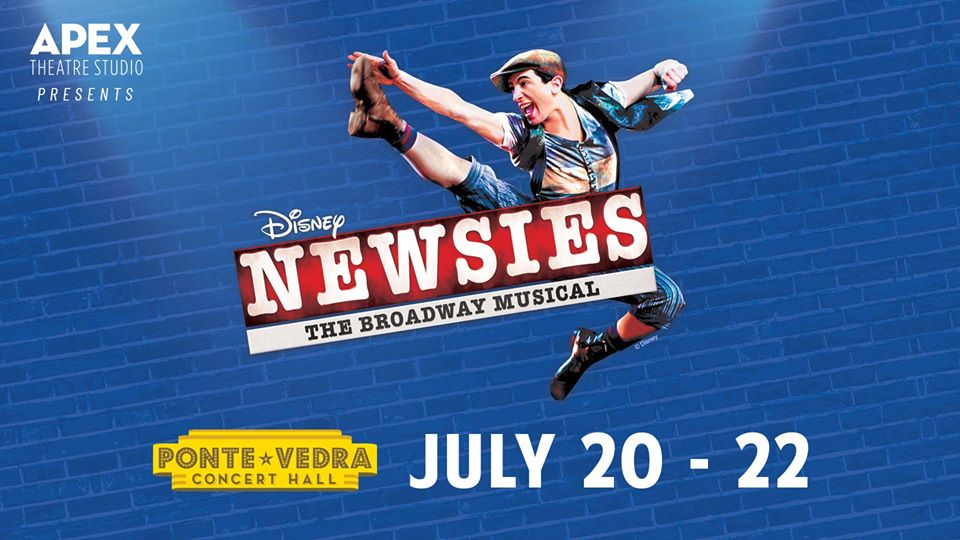 Based on the famous Newsboys strike of 1899, “Newsies” follows the lives of a rowdy and lovable pack of newspaper delivery boys who effectively led a protest against publishing magnate, Joseph Pulitzer, to improve the treatment of child laborers at the turn of the century.

“As we celebrate our fifth season of producing summer theater, we wanted to close with a show that celebrates the power of community,” remarked Ian Mairs, managing director of Apex Theatre Studio. “For musical theatre students, this show has a passionate following,” stated David Loudermilk, the show’s director and choreographer. New York-based guest artist, Tony LaLonde, who plays the leading role of Jack Kelly echoed Loudermilk’s sentiments. “For me, this was the show that made me realize this is what I wanted to do with my life,” said LaLonde.

In addition to a company of talented young artists from eight area schools, the show also features performers from the Apex Visiting Young Artists program, a nationally recognized program which allows local students to interact and collaborate with young people from all over the country. This year’s inaugural class features students from the University of Michigan, Point Park University, Northwestern University of Louisiana, West Virginia University, College of Greensboro and University of Florida. 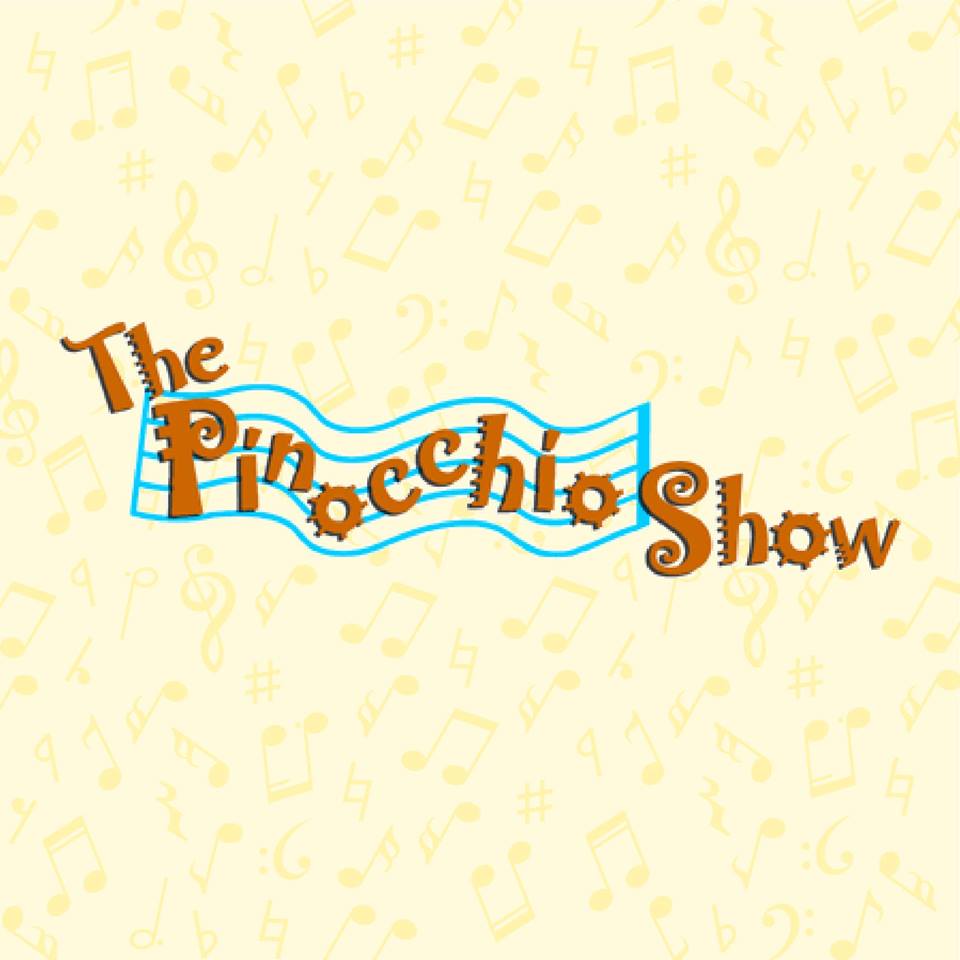 2 p.m. July 28-29
Summer Musical TheatreCamp (Curtis Camp)
Lewis Auditorium at Flagler College, 14 Granada St., downtown St. Augustine
Tickets are available at the door one hour prior to each performance
When Carl wants to run away from home, he tries to get a job with the mysterious Professor Pinecone and his traveling magical marionette puppet show. He quickly discovers, however, that the position comes with all kinds of strings attached. Once he feels the magical jolt in Professor Pinecone’s handshake, he begins the audition of his life. In this musical play-within-a-play, Carl becomes Pinocchio and improvises his way through the story, meeting a cricket with an attitude, the devious fox and cat and the sassy Blues Fairy. With the help of this eclectic cast, Pinocchio stumbles upon life’s lessons as he learns, through a series of hilarious mishaps and wrong turns, that his actions have repercussions. He even makes a donkey of himself… literally! With a little help from Tina Tuna, Pinocchio makes a selfless choice by saving Geppetto from the mouth of a giant shark (elaborate set not required!). With fun dialogue, a variety of modern music and a surprise ending, audiences of all ages will enjoy this new twist on an old favorite!

The Cat in the Hat tells the story of Horton, an elephant who discovers a speck of dust that contains the Whos, including Jojo, a Who child sent off to military school for thinking too many “thinks.” Horton faces a double challenge: not only must he protect the Whos from a world of naysayers and dangers, but he must guard an abandoned egg, left in his care by the irresponsible Mayzie La Bird. Although Horton faces ridicule, danger, kidnapping and a trial, the intrepid Gertrude McFuzz never loses faith in him. Ultimately, the powers of friendship, loyalty, family and community are challenged and emerge triumphant. 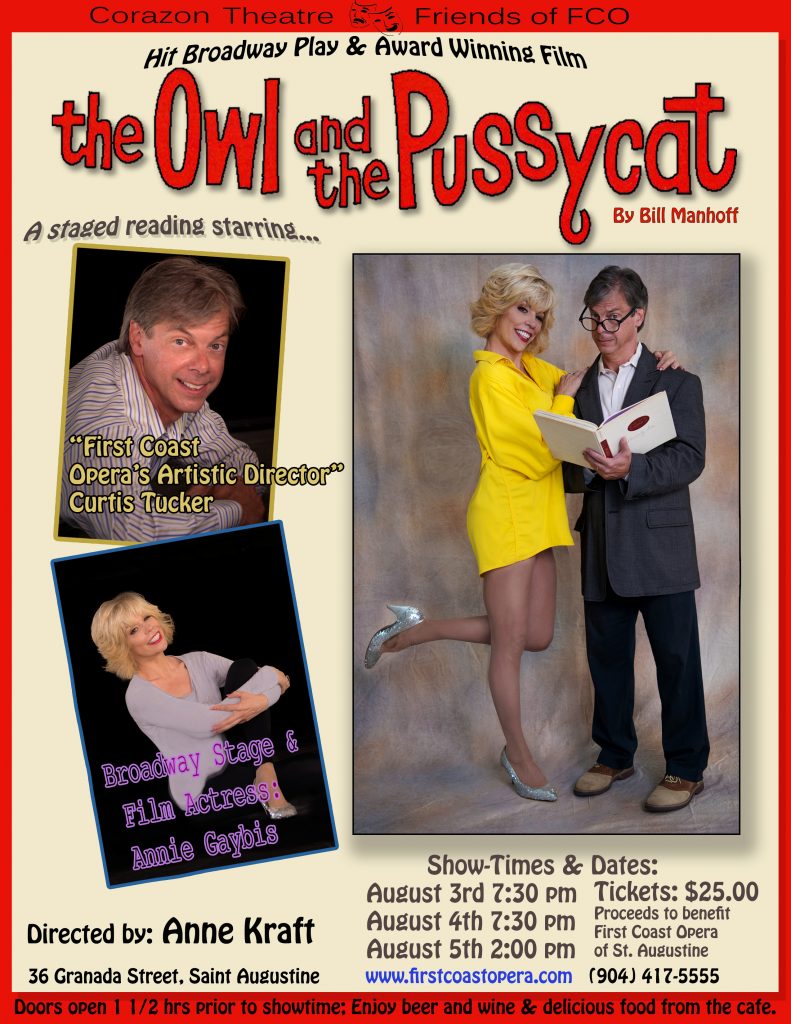 The Owl and the Pussycat

THE STORY
In a San Francisco loft, aspiring author Felix focuses his binoculars on a prostitute plying her trade. He complains to the landlord, has her evicted, and finds trouble pounding on his door in the form of Doris, not a prostitute, but an aspiring “model and actress, thank you very much.” She figures he owes her a bed for the night, an arrangement that leads to hilarity. Alan Alda and Diana Sands took the roles on Broadway, George Segal and Barbra Streisand on film.

Having fun while celebrating the past was the name of the game Oct. 20 when Flagler College students rocked out to a local dance…