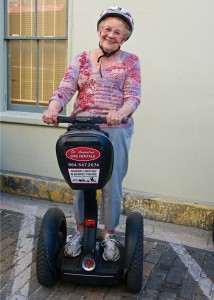 From the St. Augustine Art Association
It’s a known fact among St. Augustine locals that artist Jean Wagner Troemel gets around. On her recent 93rd birthday, the art icon stopped traffic and passersby on the nation’s oldest street when she motored by on a two-wheeled Segway.
After a 2 1/2 hour tour of the Ancient City, the “nonagenarian” concluded her historic ride on Aviles Street.
According to Keith Richardson, owner of St. Augustine Bike Rental, Troemel was the oldest person ever to have taken one of his Segway tours.
“I had some concerns, but after a little training, she took to it right away,” Richardson said.
“She was so sweet and smiled the entire time. I told her, ‘Happy Birthday, this one’s on the house.’ “
Â
Photographer Georgia Nick, owner of the Georgia Nick Gallery on Aviles Street, captured Troemel’s record-setting achievement.
“All of a sudden, I heard a lot of commotion and when I looked out, there was Jean,” said Nick.
Â
During the course of her long and distinguished art career, Troemel has exhibited her paintings in several art galleries on Aviles Street and continues to show her work at the St. Augustine Art Association. Â She also founded the PAStA Gallery decades ago and initiated the award-winning FirstÂ FridayÂ Art Walk event.
Â
“I was overwhelmed with all the people waving at me,” Troemel chuckled. Â “The ride was a lot of fun, all right. I might have to do it again next year!”
To learn more about Troemel’s artwork, go toÂ www.jeantroemel.com.Â
Â
Â