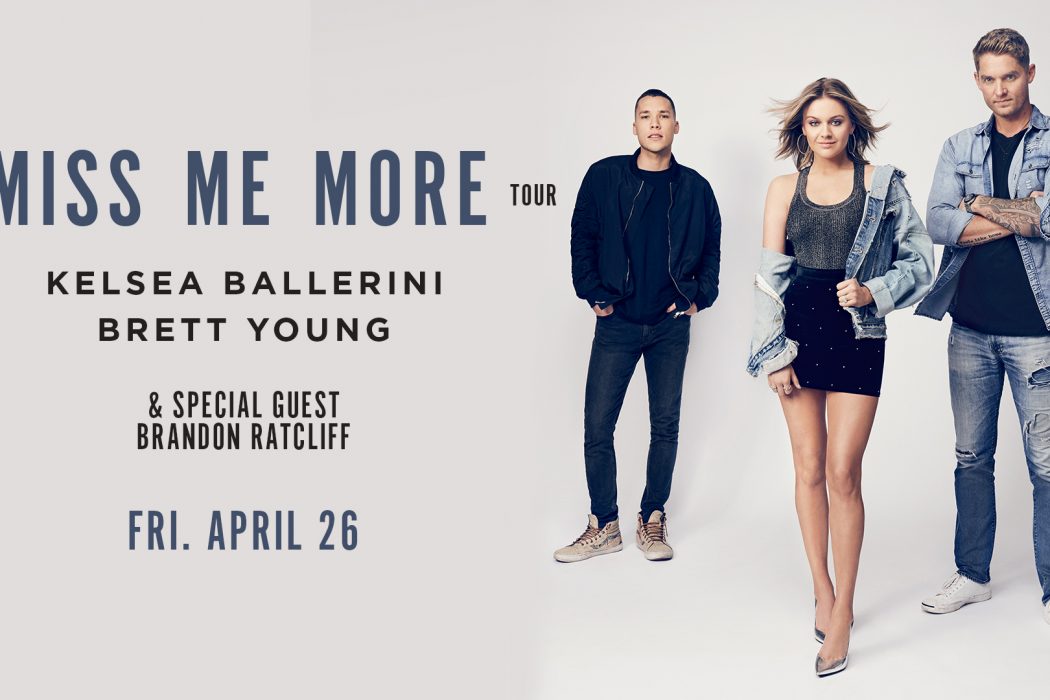 The St. Augustine Amphitheatre is proud to announce that country music hitmaker Kelsea Ballerini will bring her headlining “The Miss Me More” tour with Brett Young and special guest Brandon Ratcliff to the St. Augustine Amphitheatre on Friday, April 26, 2019. Tickets for Kelsea Ballerini with Brett Young and Brandon Ratcliff go on sale this Friday, November 2 at 10 a.m.

After completely selling out “The Unapologetically Tour”, including an international stop in Australia, Black River Entertainment’s Kelsea Ballerini is dominating venues with her headlining “The Miss Me More Tour” with Brett Young in 2019. Named after her chart-rising bold anthem, “Miss Me More,” the most-added new single on Country radio upon release, the 14-date tour will kick off on April 11, 2019, at Wicomico Youth and Civic Center in Salisbury, MD, straight through May 2019. “The message of ’Miss Me More’ means so much to me and that’s why I’m so excited to announce this tour,” shares Ballerini. “It’s about being bold and unapologetically standing up for yourself. I can’t wait to sing it with everyone next April!”

Inviting hit maker Brett Young to join her, the ACM’s New Male Vocalist of the Year has racked up four consecutive #1 Platinum hits from his self-titled breakout album, setting him apart as the first debut Country artist since 2014 to claim a 3X Platinum certification. Special guest Brandon Ratcliff rounds out the bill as the opener.

Praised by The New York Times as being an “elegant songwriter,” Grammy nominee Kelsea Ballerini’s latest single, “Miss Me More,” hails from her acclaimed sophomore album UNAPOLOGETICALLY. The newly released deluxe edition includes four tracks: “Fun and Games,” “I Think I Fell In Love Today,” “Landslide (Live from Nashville)” (Fleetwood Mac), and her new collaboration with The Chainsmokers, “This Feeling,” plus the original 12-track compilation. Continuing to blaze a trail that’s all her own, Ballerini appears on NBC’s hit music competition series, The Voice, as their first-ever fifth coach during the 10-part Comeback Stage series this season. In addition to being awarded high-profile accolades from ASCAP, iHeartRadio, Billboard, and Radio Disney, plus several breakthrough female artist nods from ACM and CMT, the Black River Entertainment artist is nominated for Female Vocalist of the Year at The 52nd Annual CMA Awards. Ballerini remains the only female artist in the genre’s history, including female duos and groups, to claim #1 with her first three consecutive singles [Platinum-certified, #1 smashes – “Love Me Like You Mean It,” “Dibs,” “Peter Pan”] from a debut album [Gold-certified breakout THE FIRST TIME].

Academy of Country Music’s New Male Vocalist of the Year Brett Young’s sophomore album TICKET TO L.A. is due December 7 on BMLG Records, and its lead single “Here Tonight” is quickly rising at radio. The highly-anticipated release follows his “soothing, approachable” (New York Times) self-titled debut album, which became an instant success upon its release in 2017. The release dominated the Top 20 on the Country Albums chart for 37 weeks and quickly reached RIAA Platinum certification. Delivering four consecutive hits, Young became one of Country music’s new class of hitmakers as each single climbed to the top of the charts, distinguishing himself with “In Case You Didn’t Know” as the first debut Country artist since 2014 to garner 3X Platinum certification.

The Original Cafe Eleven, 501 A1A Beach Blvd., in St. Augustine Beach has huge lineup of live music this spring. See the list below….