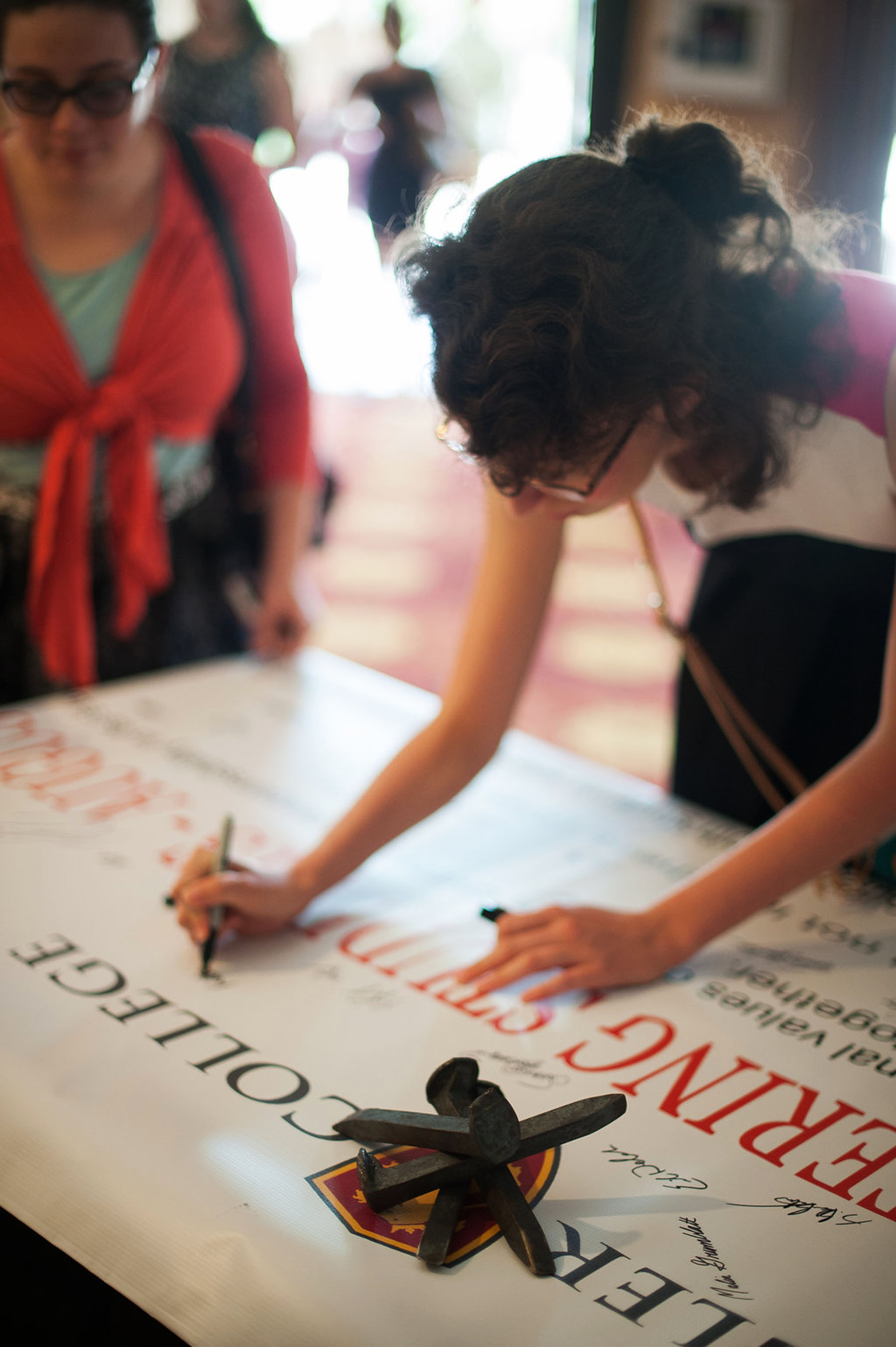 Flagler College administration officials and faculty welcomed 633 new students to the Flagler family Aug. 26, during the collegeâ€™s annual convocation ceremony. Students were handed railroad spikes, symbolic of railroad magnate Henry Flaglerâ€™s legacy and the beginning of their own, as they entered Lewis Auditorium.

â€œWe use these railroad spikes to signify the start of your legacy,â€ said Dan Stewart, vice president of student services. â€œWe challenge you to continually build on your legacy, to set firmly this first layer of track, your college education.â€

The â€œspikesâ€ tradition began three years ago, as part of the collegeâ€™s First Year Experience program. At graduation, students will receive another spike â€” a golden one they can actually take home â€” as an emblem of academic achievement and the continuation of what Stewart calls their â€œlife legacy.â€

The convocation speaker was Carine McCandless, author of New York Times bestseller â€œThe Wild Truthâ€ and sister of Chris McCandless, whose story of adventure and death in the Alaskan wilderness inspired Jon Krakauerâ€™s novelÂ â€œInto the Wild.â€ McCandless spoke to students on overcoming adversity and charting oneâ€™s own path in life.

â€œPart of your job is to learn about truth â€” your own truthâ€ she said. â€œEverything comes to you in a filter.â€ The author referenced a 1970s photo on a Powerpoint slide of her and brother Chris, dressed in their Sunday best, and also, according to McCandless, silently suffering the effects of living in a home filled with domestic violence.

â€œYour DNA does not define you,â€ she added. â€œDonâ€™t let your past hold you back. We all have the first and last chapters of our lifeâ€¦whatâ€™s really important are the pages in-between.â€

Her talk was punctuated by lessons of her own life and those of her brother, and of the importance of living mindfully and truthfully.

â€œChris walked into the wild to truly live,â€ she said. â€œHis final act was one of truth and awareness. Whether or not you agree with his method doesnâ€™t matter. Figure out your own method â€” thatâ€™s what matters. Your legacy begins now.â€

The ceremony was part of Flaglerâ€™s Building Your Legacy program, which includes First-Year Advisers, a five-day orientation spent in a variety of academic and social events to ease the transition from high school to college, and an honor pledge. The program is designed to make sure that all first year students begin with a solid foundation for what will become their legacy.

Beginner vintners and curious wine lovers are invited to participate in a three-week course on the Art of Wine Making, starting April 12,…