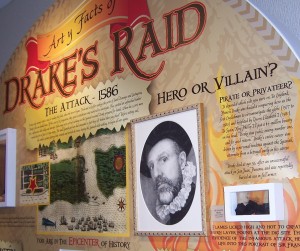 From the St. Augustine Art Association
Â The St. Augustine Art Association was honored by the Florida Trust for Historic Preservation with the top award for Outstanding Achievement in Archaeology at the statewide convention in Tampa, Florida on May 16.
The Association’sÂ Art y Facts of Drake’s RaidÂ permanent exhibition that showcases rare Spanish and Native American artifacts from Sir Francis Drake’s 1586 attack on St. Augustine was recognized for its significance in preserving Florida’s rich heritage.
Elyse Brady, Administrator for the Art Association, accepted the award, along with Stanford Adams, the exhibit curator and builder.
“We’re so proud to have been recognized for this exhibit, which was the result of a remarkable creative collaboration among archaeology volunteers, scholars and artists,” said Brady, the project coordinator. Â “When folks visit this exhibit, they experience St. Augustine’s dramatic history from a uniquely artistic perspective.”
In 1998 prior to construction of the new wings at the Art Association, City Archaeologist Carl Halbirt discovered an undisturbed collection of 16th-century pottery, building materials, a sewing needle and other items buried in a layer of burned charcoal just three feet under the floor where theÂ Art y Facts of Drake’s RaidÂ exhibition is now displayed. Â “The assemblage of artifacts unearthed at the Art Association is unparalleled,” said Halbirt.
According to Halbirt, the site of the present day Art Association was the epicenter of the original Spanish settlement. Â When Drake burned the town, the Â primitive structure collapsed in the fire, shattering everything inside. Â Those items, Halbirt confirmed, provided “de facto” evidence of Drake’s infamous attack.
The award-winning exhibit, which features numerous Majolica pieces, a large reassembled San Pedro cob-marked Native American vessel, a touchable Stratigraphy Quilt, an original charcoal portrait of Drake, video, maps and other artisan treasures, was developed as a 450th legacy project through a grant from the Florida Humanities Council.
Visitors may view the exhibit in the Marguerita Phillips North Gallery at 22 Marine Street. Â Gallery hours are Tuesdays – Saturdays,Â noon to 4 p.m.Â and Sundays,Â 2 to 5 p.m.Â Admission is free. For information and group tours, call the St. Augustine Art Association atÂ (904) 824-2310.