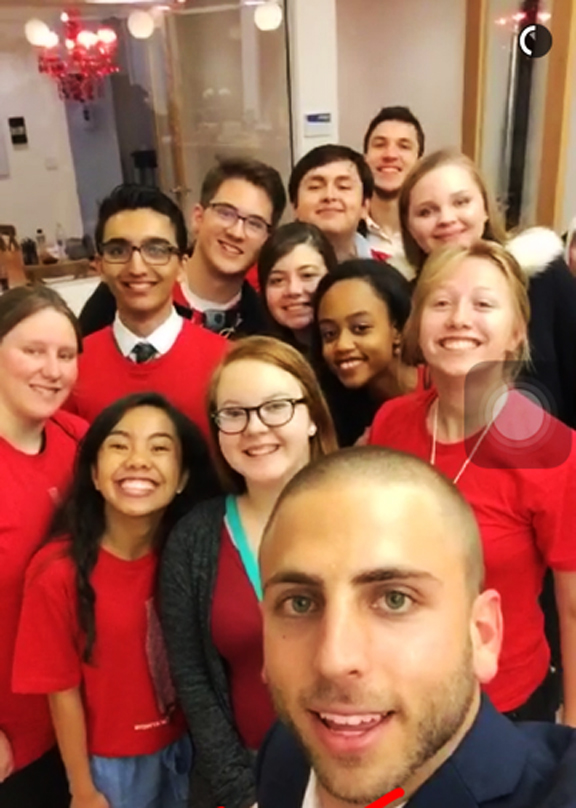 Snapchat photo of Hope Rendell, wearing glasses and teal purse, with Coca-Cola Snapchat coordinator (in foreground) and other winning students from across the United States.

The freshman, along with 14 other youths nationwide, was selected based on a winning essay that addressed how to use technology to â€œmake the Internet a happier place.â€

As part of her submission, Rendell, an Education major, proposed the development of a Web site where people could anonymously submit offensive cyberbullying material â€” articles, posts and Web sites. She suggested a corporation, such as Microsoft, Google or Coca-Cola, manage the site and donate a dollar per cyberbullying entry to an anti-bullying charity.

â€œI was contacted by email saying that I won and I was so excited,â€ she said.

In October Rendell flew to New York, where she joined 14 other students ranging in age from 13 to 19 to develop and present ideas for the cyberbullying â€œHackathonâ€ portion of the contest. The conference was held at the DoSomething.org headquarters and participants were divided into five groups to dream up anti-cyberbullying ideas.Â  With the help of a tech mentor, Rendell and her team developed an app with the slogan â€œBe the ONE who makes a difference.â€ The app would provide a safe haven for victims of cyberbullying where others could post positive advice for them. Mental health counselors would also be a part of the app service.

â€œWith bullying, victims feel like they’re alone,â€ Rendell said. â€œAnd I really believe if one person does their best to make that person feel loved or cared about, that makes a huge difference in the way things turn out.â€

Her group won in the category of â€œBest User Experience,â€ and Rendell took home a plaque and $500. Other highlights of the trip included meeting the CEO of Coca-Cola, the managing editor for BuzzFeed and attending the Broadway musical â€œFinding Neverlandâ€ with comedy series “Glee” star Matthew Morrison.

â€œI have never been to New York before, and I have always adored musical theatre,â€ she said. â€œAnd being in a hotel room where I was able to look out onto Broadway was amazing.â€

Local talent has blossomed in 20 years of Curtis Camp

Three musicals and three one-act comedies were on stage this summer, featuring local students from ages 5 to 18. This was the 20th season…