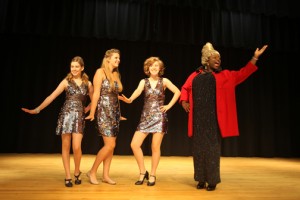 The Summer Musical TheatreCamp for Kids and Teens begins its 20thÂ the classic musical Grease and An Evening of One-Acts Plays as the shows for the high schoolÂ division of this educational program.

The high school camp begins Monday, June 9 and runsÂ four consecutive weeks ending with the productions of Grease on July 3, July 5Â and JulyÂ 6; and An Evening ofÂ One-Acts Plays on July 5 and 6.

The second session of SMTC begins with programs for kids ages 5 through 11, and a secondÂ session of middle school and high school aged kids. The kids show this summer is a productionÂ of Cinderellaâ€™s Glass Slipper and the teen crossover group with perform the musical The Wiz.

These camps begin on Monday, July 7 and continue four consecutive weeks with performancesÂ of both shows on the weekend of August 1-3.

All performances take place at the beautiful Lewis Auditorium on the campus of Flagler College, 14 Granada St., downtown St. Augustine.

While hip Danny Zuko and wholesome SandyÂ Dumbrowski resolve the problems of their mutual attraction for each other, the gang sings andÂ dances its way through such nostalgic scenes as the pajama party, the prom, the burger palaceÂ and the drive-in movie.

From within the cast of the larger musical a second cast is auditioned to perform in the secondÂ production. The Summer Musical TheatreCamp staff has chosen a group of comedic one-actÂ plays that culminate in an evening showcase of students.

The middle school / high school crossover camp cast will present the musical The Wiz, adaptedÂ from The Wonderful Wizard of Oz by L. Frank Baum.

In this musical version we find a fantasyÂ for today â€”Â mysterious, opulent and fanciful â€”Â a dream conjured up by a single space-age childÂ with Dorothyâ€™s adventures in the Land of Oz set to music in a dazzling, lively mixture or rock,Â gospel and soul. Itâ€™s a dance-marathon of a musical.

It opened on Broadway on January 5,Â 1975 at the Majestic Theater and ran for 1672 performances.

The story is age old, but youâ€™ll meet playful new characters in thisÂ fresh adaptation; with silly stepsisters, plus a brave mouse, a hesitant cat and the amazingÂ Pumpkinhead, who changes into a coach.

The Fairy Godmother has her hands full tutoring anÂ apprentice but still makes time for Cinderella. This well-known classic is filled with songs thatÂ create their own magic. Cinderellaâ€™s Glass Slipper will be a great educational experience for theÂ summer camp kids.

The Summer Musical TheatreCamp, now in its 20thÂ students a taste of musical theater by instructing in all aspects of a musical theater production:Â acting, music and dance.

The camp culminates in the creation and performance of completeÂ staged musical theater and theatrical productions before a live audience.

The Summer Musical TheaterCamp is widely as the leading training ground for young actors.Â Since its inception in 1995, with 30 kids ages 5 to 14, the educational program has producedÂ 28 musical theater shows with over 1,200 kids and teens in participation. For the pasTÂ 11Â years the SMTC for teens has produced full-scale Broadway musicals on its stage.

This summerÂ SMTC produces its seventh non-musical comedy with an elite auditioned cast from within theÂ teen program. Additionally, for a fifth year, the middle school/high school group will presentÂ its own full-scale musical in an effort to give these younger actors the skills and opportunities toÂ be on stage in leading rolls.

The actors have come not only from St. Augustine and throughoutÂ the state, but from across the USA including New Jersey, California, Ohio, Wisconsin; and evenÂ England and Malaysia. Many kids and teens have spent up to 13 years in the programÂ with several now working as professional actors throughout the county.

This summer over 150Â kids ranging from age 5 to 18 will take part in the 2014 summer season.Â For a brochure and/or additional information contact Curtis Powell and the Summer MusicalÂ TheatreCamp at (904) 501-7396.