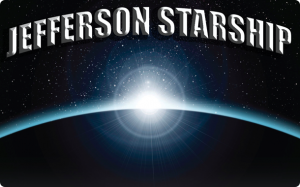 Ponte Vedra Beach, FL â€” The Ponte Vedra Concert Hall proudly announces that progressive rock group Jefferson Starship will perform and celebrate the music of Jefferson Starship on Saturday, April 25, 2015. Special guests The Mojo Gurus will open the show. Tickets for will go on sale this Friday, February 27 at 10 a.m.

The band, descended from Jefferson Airplane â€” who performed at Monterey and Woodstock, at Altamont with the Rolling Stones, and shared the bill countless times with Grateful Dead & Janis Joplin, and whose music helped define a generation focused on civil rights, environmental awareness and anti-war activism â€” is set to perform the landmark recordings â€œDragonflyâ€ and â€œRed Octopus,â€the latter of which catapulted them to the top of the charts twice in 1975. In 2015, Jefferson Starship will celebrate the 50th Anniversary of Jefferson Airplane & The San Francisco Sound, of which Kantner and Freiberg were instrumental in creating.

Jefferson Starship is fronted by acclaimed singer Cathy Richardson, star of the play â€œLove, Janisâ€ with long time members Donny Baldwin (drums), Chris Smith (keyboard/bass) and guitarist Jude Gold rounding out the line-up. 2013 was a pivotal year for the stalwart, iconic band whose diverse projects and performances include a symphony engagement, broadcast across the U.S. on HDNET and their heralded appearance on PBS, headlining â€œ60â€™s Rock, Pop & Soul,â€ which still airs coast to coast.

Tickets for this seated show go on sale this Friday, February 27 at 10 a.m. Tickets will be available for purchase at the Ponte Vedra Concert Hall and St. Augustine Amphitheatre Box Offices, ticketmaster.com, all Ticketmaster outlets and by phone at (800) 745-3000. Go to pvconcerthall.com for more details.