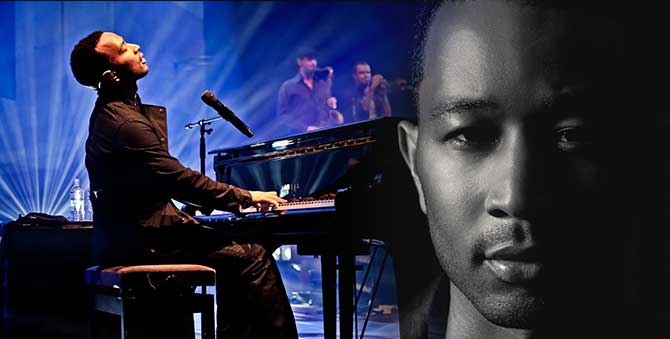 John Legend will perform July 25 at the St. Augustine Amphitheatre. Tickets will go on sale at 10 a.m. June 6.

The highly anticipated tour comes on the heels of Legendâ€™s #1 smash single â€œAll of Me,â€ from his critically acclaimed fourth studio album LOVE IN THE FUTURE, which recently claimed the #1 spot on Billboardâ€™s Hot 100 Singles Chart.

The single marks Legendâ€™s highest selling and charting single of his career to date, with sales over 3 million in the US.

Legendâ€™s current tour, â€œAn Evening with John Legend: The All of Me Tour,â€ features John in an intimate and acoustic setting, highlighted by guitar/vocal accompaniment as well as a string quartet. In a recent review, Billboard hailed the show as â€œone of the best concerts ever.â€Â

After college, Legend was introduced to then up-and-coming hip-hop artist Kanye West, who quickly signed Legend to his G.O.O.D. Music imprint and hired him to sing vocal hooks on some of his music.

Legend started gaining momentum through a series of similar collaborations with established artists, adding vocals to an impressive list of chart-topping hits including West’s “All of the Lights,” Jay-Z’s “Encore” and back-up vocals on Alicia Keys’ 2003 song, “You Don’t Know My Name.”

The follow up was 2006â€™s platinum-selling Once Again, which brought Legend another Grammy, Best Male R&B Performance, for his single â€œHeaven,â€ and included collaborations with Kanye West, will.i.am and Raphael Saadiq. Legendâ€™s next release was 2008â€™s Evolver, led by the hit single “Green Light” featuring Andre 3000. Legend’s most recent effort was his 2010 collaboration with the Roots, Wake Up, which won the Grammy for Best R&B Album a year later.

Tickets ware availableÂ at the St. Augustine Amphitheatre and Ponte Vedra Concert Hall box offices. Save on fees by purchasing tickets here at our box office, walk around the venue and scout your potential seat, and have first pick when the tickets go on sale at 10am. Tickets also will be available at findmytix.com, all Ticketmaster outlets, or by phone at 800-745-3000. Go to staugamphitheatre.com for more details.

By BONNIE C. WELLS The perfect balance of hot and sweet, and similar to a Habanero but fruitier, the Datil Pepper is the…