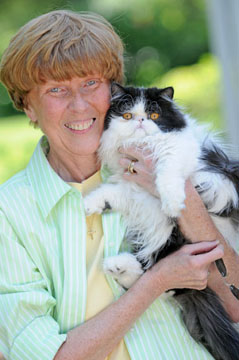 Sally Cowan and her cat Thunder

Pearl buttons made their debut in 1885.

They are still my favorite buttons. I donâ€™t believe buttons, from the very beginning, were created just to finish it, but to enhance it. Buttons are sized in â€œline.â€

There is no end to the sizes and shapes of buttons. Buttons can be used along with buttonholes, loops, frogs, chains, etc. When you pick your buttons, be sure to keep in mind the type of fabric, the design and of course, the size. If a pattern suggests a certain size, it would be best to stay with that size.

The designer has already thought about it and had a reason for selecting that particular size. Even though the pattern always marks the appropriate place for the buttons, always take into consideration your own personal needs.

For example, if you have a large bust, you would want to make sure you have a button at the fullest part of the bustline. Shank buttons are often used so they lie smoothly when buttoned. The length of the shank is determined by the thickness of the garment, plus one-eighth inch.Â  Start sewing on the right side.

To keep the button in a raised position, use a matchstick, or tooth pick and sew over the object when sewing on the button. After you have gone back and forth numerous times, remove the object.Â  Holding the button in the air, wrap the remaining thread around the loose threads several times and secure.

This type of shanked button is often used on coats. Along with this, some people prefer to reinforce their buttons by placing a small flat button on the back of the garment. This gives a little added security.Â  If you have a large needle you can also use dental floss to sew on a coat button or use it in case of an emergency.

Some people walk around without â€œtheir marblesâ€ while other just float through life with â€œloose buttons.â€

New CEO Named For We Care For Humanity