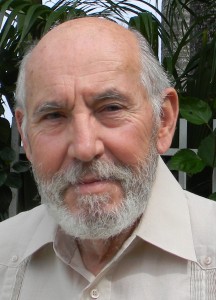 St. Augustineâ€™s own Shrine of Our Lady of Le Leche will be the subject of historical discussion during a free lecture at 7:30 p.m., March 19 at Lewis Auditorium at Flagler College, 14 Granada St., downtown St. Augustine.

Historian Miguel Bretos, Ph.D., a native of Matanzas, Cuba, and an alumnus of the 1960â€™s Operation Pedro Pan refugee program in the United States, will lead the conversation, titled Our Lady of Milk: The Story of St. Augustineâ€™s Own Marian Devotion.

Bretos, who holds advanced degrees from the University of Nebraska and Vanderbilt University, will discuss the development of the Nursing Mother as an object of devotion and a major theme in the development of Marian iconography since the third century. He will also explore the history of the St. Augustine devotion and discuss the first shrine dedicated to Our Blessed Mother in the United States.

In 1994 he was hired as counselor to Secretary I. Michael Heyman of the Smithsonian with oversight over Latin American and Latino programming through the Institutionâ€™s then 16 units. He also served as interim director of the National Postal Museum and a senior scholar at the National Portrait Gallery, from where he retired in 2008.

At the Smithsonian, Dr. Bretos was curator of several noted exhibitions including Rhythms of Identity and Retratos: 2,000 Years of Latin American Portraits. In 1991, he curated Cuba and Florida: Exploration of a Connection. All three exhibits had fully illustrated companion books. He is author of four books, Arquitectura y Arte Sacro en Yucatan, Iglesias de Yucatan and La Catedral de Merida. His most recent work is Matanzas: the Cuba Nobody Knows, a formal history of his Cuban hometown. He

is working on a history of Spanish colonial Florida, a revision of his 1991 study of Yucatan churches,

and a book-length study of Cuban conflicts that have impacted world history.

4th century grotto in Bethlehem. A Franciscan community maintains a shrine there called the Milk Grotto, with a Blessed Virgin nursing the infant Jesus as its centerpiece. Thousands of pilgrims make their way annually to the shrine asking for the blessings of motherhood.

For more information, call 904-824-2806 and ask for Father Tom Willis of the Cathedral Basilica of Saint Augustine.

The Flagler Hospital Auxiliary is a wonderful place for you to make a difference in your community. If you can spare 4…