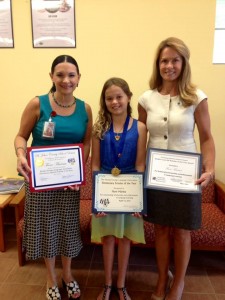 Fiore Marina, a fifth-grade student at Durbin Creek Elementary School, has been named the Florida Foreign Language Association (FFLA) Elementary Scholar of the Year for the state. She was nominated by Language Exploration Enrichment (LEE) Spanish Instructor Johanna Santinho and Administrator for Curriculum Maria Janet Robles; endorsed by LEE Founder and Administrator of Operations Donna Guzzo.

Criteria for the award include accomplishments in language study, academic record, teacher recommendations and an essay. This award is presented annually by the FFLA, and Fiore will receive a certificate and a medal in recognition of her achievements.

Fiore has been studying Spanish since third grade with the LEE program and enjoys mentoring younger students. Fiore says learning a world language helps her understand culture, music and sports. This is the 9th consecutive year a LEE student brings the award home.

Fiore is the daughter of Linda Gillespie and Carlos Marina of St. Johns.

Language Exploration Enrichment was founded in 2003. Itâ€™s mission is to encourage all elementary students to explore world languages and cultures. The program is designed as an after school fundraiser. Participating schools are Durbin, Julington, Cunningham, Hickory, Timberlin Creeks, Liberty Pines Academy, Ocean Palms, Palencia, Ketterlinus, R.B.Hunt Elementary Schools. LEE net proceeds are donated to LEE participating schools to promote cultural awareness. LEE has donated over $65,000 in the past ten years to participating schools.

â€œOur goal is to offer fun, intensive language instruction, to not only teach grammar structures and vocabulary, but also culture, tolerance and respect for others, to help prepare students to become productive members of our increasingly global society. At LEE, we are not just an after school program, we are a lifestyle,â€ said Guzzo, LEE Founder and Administrator. 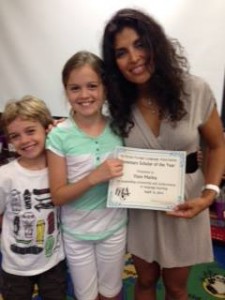 Beginning at 10:30 a.m. June 1, reservations are being acceptedÂ  for The Woman’s Exchange Christmas in October celebration at the historic Pena-Peck House….