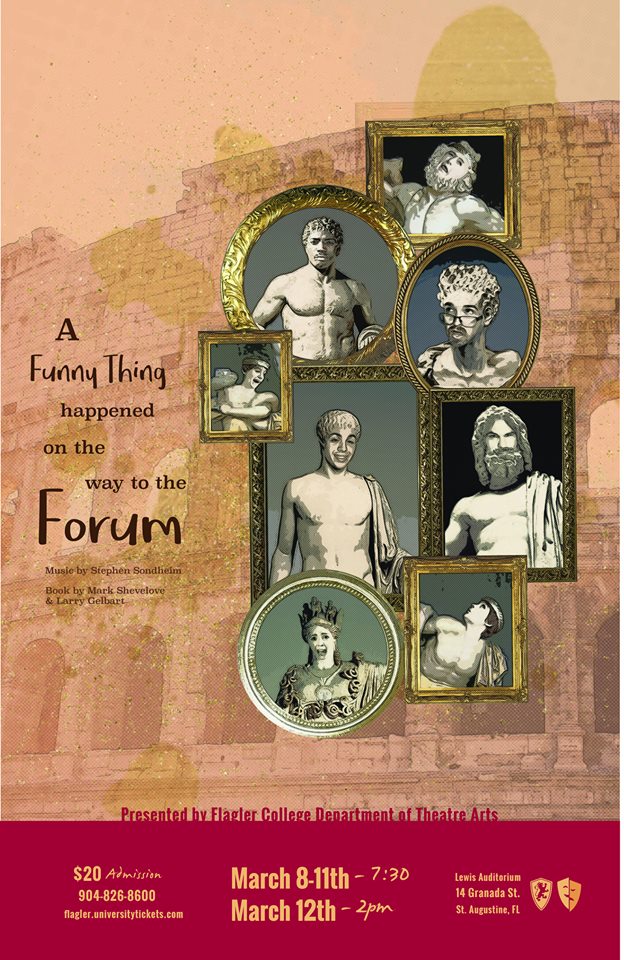 Composer Stephen Sondheim’s debut as both composer and lyricist will take the stage this spring at Flagler College, as the Department of Theatre Arts presents a new take on his collaboration with Burt Shevelove and Larry Gelbart’s  A Funny Thing Happened on the Way to the Forum  from March 8 to March 12.

Inspired by the collected plays of Roman playwright Plautus, the production follows the story of Pseudolus, a slave who deploys many tactics in order to earn his freedom. Pseudolus attempts to arrange a secret meeting between his master and a new arrival at the House of Marcus Lycus, a neighboring brothel. Through the course of his actions, Pseudolus encounters one complication after another until he finds himself caught in a massive web that plays perfectly into the farcical style of the show.

Flagler senior Becca Woods, previously seen as Shelby in the college’s hit production of the musical Spitfire Grill last spring and as “Mistress” in the award-winning production of “The Maids” last fall, will play the role of Pseudolus.

A Funny Thing Happened on the Way to the Forum features a unique approach to the construction of the set known as “found-object,” which places the spectacle of the story on the shoulders of the actors, thus becoming an actor-driven aesthetic. This concept forces both the company of actors and the audience to bring with them their imaginations and open-minds.

A Funny Thing Happened on the Way to the Forum contains, adult themes, gag-violence, and may not be suitable for younger audience members. Parental discretion is advised.

For more information on “A Funny Thing…Forum” or the Flagler College Department of Theatre Arts, please contact Andrea McCook, Theater Arts Department Chair at (904) 819-6401 or mccooka@flagler.edu.

Flagler College is a private, four-year comprehensive college located in St. Augustine, Fla. The college offers 31 majors, 36 minors and two pre-professional programs. Flagler College has an enrollment of about 2,500 students, as well as a satellite campus in Tallahassee, Fla. U.S. News & World Report and The Princeton Review regularly feature Flagler as a college that offers quality education at a relatively low cost. A Flagler education is less than half the cost of similar private colleges, and competitive with many state universities. A relatively young institution (founded in 1968), Flagler College is also noted for its historic beauty. The centerpiece of the campus is the former Hotel Ponce de Leon, a National Historic Landmark built in 1888 by railroad pioneer and Standard Oil co-founder Henry M. Flagler. For more on Flagler College, visit www.flagler.edu