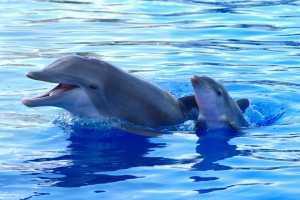 Dazzle, a newborn dolphin calf, was born on May 22 at Marineland Dolphin Adventure.

It was with great pleasure on Thursday, May 22, that we welcomedÂ Marineland Dolphin Adventureâ€™s newest calf to the family. Dazzle, one of Marinelandâ€™s beloved resident Atlantic bottlenose dolphins, successfully gave birth to a female calf. Both mom and calf are doing well and Marineland animal care and training teams will continue to monitor the pair in the coming months.

â€œOver the past week, our veterinary and training teams have been giving around-the-clock care to Dazzle and her calf, taking every measure possible to ensure that the calf thrives to its best potential,â€ said Dr. Greg Bossart chief veterinary office and senior vice president. â€œThe animal care and training teams will be monitoring the pair in the coming days and months to ensure that both are passing critical milestones that are expected with mothers and calves following birth.â€

“In the coming months, as Dazzleâ€™s confidence in the calfâ€™s independence grows, our relationship with the baby can begin to develop.â€ said Michael Hunt, director of animal training.

Marineland Dolphin AdventureÂ has the longest standing dolphin breeding program of any aquarium or zoo.Â  In fact, the first dolphin birth in a human care environment took place at Marineland in 1947. The ongoing success of the program is a result of the dedication and extraordinary level of care given from Marineland staff to its animals. With every animal birth, researchers and experts can learn more from mothers, calves and other dolphins to build data that may ultimately be applied to help conserve the species in their natural habitats.

â€œNot only are we learning from these incredible animals, we are helping to shape the maternal instincts of future dolphin generations,â€ said Hunt. â€œThis birth was a family affair, as throughout the labor and birthing process, both Dazzleâ€™s own mother and older daughter swam alongside the mother-to-be.â€

Dazzle is 25 years old and this calf is one of several successful pregnancies during her time with us here at Marineland Dolphin Adventure. We couldnâ€™t be happier for this exciting news! She is the mother of three other healthy Marineland resident dolphins: her daughter, Casique, and her sons Tomo and Hemingway. Dazzleâ€™s own mother, Betty, resides at Marineland Dolphin Adventure as well, and guests can view all three generations when visiting!

As before, we couldnâ€™t be happier to share this exciting news with you, our fans! The next few months are a critical time of development for the calf and we will continue to keep you updated. Dazzle and the calf are currently bonding in a semi-private habitat and may not be visible to public.

Jan. 11-Feb. 3: An Enemy of the People at Limelight Theatre

Limelight Theatre presents An Enemy of the People onstage with the first performance January 11 & runs through February 3. SHOWTIMES Jan. 11-Feb 3…