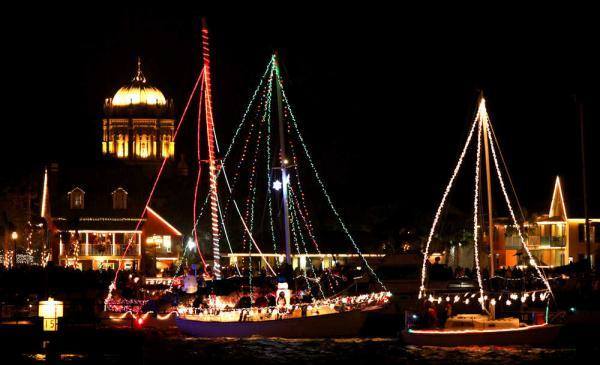 Nights of Lights has been described as an umbrella event under which many, many other events organized by myriad of organizations take place. You could say that Nights of Lights is the Christmas tree and the many events are the ornaments.

When planning a trip to St. Augustine to view the brilliant award-winning light display, keep these popular events in mind.

Jessica Tandy and John Denver starred in the movie version of Foxfire, a story that celebrates Appalachian culture and keeping traditions alive. limelight-theatre.org

Castillo by Candlelight: Enemy at the Gates

Begin Colonial Night Watch with this special candlelight tour of the Castillo de San Marcos. Reserve tickets in advance by calling or stop by the Castillo ticket booth.904-829-6506 Ext. 239 www.nps.gov/casa

In honor of the British influence in St. Augustine from 1763-1784, the Castillo de San Marcos becomes Fort St. Marks for the weekend. Step back in time to explore St. Augustine’s rich heritage with a glimpse into British and Spanish military life. From 9 a.m.-5 p.m. www.nps.gov/casa

Tree Lighting Under the Sea at the St. Augustine Aquarium

The St. Augustine Aquarium is hosting tree lighting under the sea in the Florida reef every Friday and Saturday night in December from 5-8 p.m. www.saaquarium.com

Luminary Night at the St. Augustine Lighthouse & Maritime Museum is a family friendly tradition from 6-9 p.m. with activities for all ages, visits with Santa, yuletide refreshments and the lighthouse’s spectacular holiday decorations and lighting displays.www.staugustinelighthouse.org

Orchestral Sounds of the Season 2018

The holiday parade, beginning at 10 a.m., will take place down Main Street in Hastings starting at the W.E. Harris Community Center, 400 E. Harris St. Continue the holiday celebration after the parade at the Hastings Library, 6195 S. Main St. www.sjcpls.org

The annual Firefighter Chili Cook Off at the St. Augustine Amphitheatre takes place 2-6 p.m. Admission is free, and chili sample tickets are available for a small fee. www.facebook.com/safdfirefighters

This annual holiday parade of motorized decorated with brilliant lighted displays begins at 6 p.m. The boats will light up St. Augustine’s Matanzas Bay between the Bridge of Lions and Castillo de San Marcos. www.staugustineyachtclub.com

The Castillo de San Marcos opens its doors for this St. Augustine holiday tradition. Explore the Castillo by lantern light, interact with staff and volunteers dressed to represent the more than 300 years of Castillo history from 6-8 p.m. www.nps.gov/casa

The 70-member St. Augustine Community Band with members ranging in age from 16-80 will perform a holiday concert at Pacetti Bay Middle School at 7:30 p.m.www.staugband.org

The Apex Theatre Studio will present A Christmas Story, a full-length comedy based on the beloved film at the Ponte Vedra Concert Hall. www.pvconcerthall.com

The Posadas of Old St. Augustine

For more than 400 years, the colonial Hispanic Christmas tradition of Las Posadas has been celebrated by processions throughout the New World. Florida Living History’s volunteers will present this nighttime, candle-lit heritage event set in the year 1580 from 7-8 p.m. including a Candlelight Procession along St. George Street in historic downtown St. Augustine. info@floridalivinghistory.org www.floridalivinghistory.org

The North Florida Women’s Chorale presents its annual Christmas performance at 7 p.m. at the Cathedral Basilica of St. Augustine. www.womenschorale.org

This annual New Year’s Eve fireworks display and entertainment at St. Johns County Pier Park features family friendly activities, including a kid’s zone, photo booth, food vendors and live music. The event is from 5-10 p.m., and the fireworks display is at 8:30 p.m.www.sabevents.com

Changing of the Guard

Changing of the Guard ceremony performed by the St. Augustine 1740 Spanish Garrison at 6:30 p.m. https://hfm.club/sacalendar

This four-day film festival featuring works from around the world and brings in various directors, producers and actors to discuss their works with high audience interaction. www.staugfilmfest.com