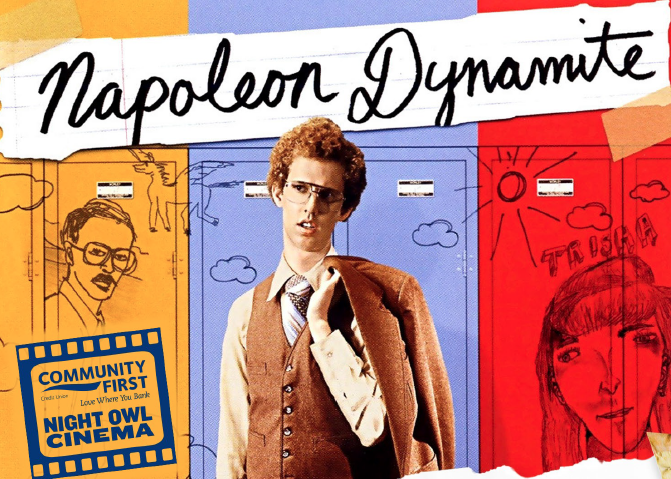 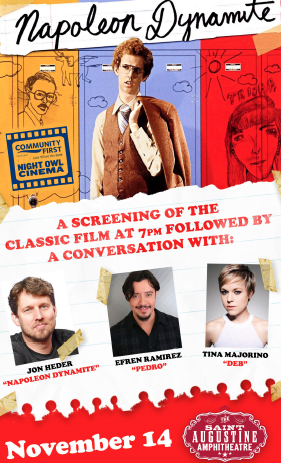 Heck yes! The beloved film series Community First Night Owl Cinema returns to the St. Augustine Amphitheatre and to celebrate its return, the cast of “Napoleon Dynamite” are coming to St. Augustine for a screening and discussion of the 2004 cult classic film. This unique evening will include a full screening of “Napoleon Dynamite” followed by a lively, freewheeling, moderated discussion with fan-favorite cast members; Jon Heder (Napoleon Dynamite), Efren Ramirez (Pedro) and Tina Majorino (Deb). This event is proudly presented by Community First Credit Union. Free parking at the Amphitheatre Main Lot!

About Napoleon Dynamite: From the rural town of Preston, Idaho, comes “Napoleon Dynamite” (Jon Heder). With a red ‘fro, his moon boots, and illegal government ninja moves, he is a new kind of hero. His family consists of fragile brother Kip (Aaron Ruell), who’s seeking his soulmate in online chat rooms; Uncle Rico (Jon Gries), who is stuck in his “glory” days of high school football; and Grandma (Sandy Martin), who enjoys going out to the dunes on her quad-runner. Napoleon spends his days drawing magical beasts, working on his computer hacking skills to impress the chicks, and begrudgingly feeding his Grandma’s pet llama. When his friend Pedro (Efren Ramirez) decides to run for class president, it is Napoleon to the rescue to help him triumph over adversity.

The beloved indie classic “Napoleon Dynamite” was made almost 15 years ago. Since then much has changed; but the characters, as enduring as they are endearing, stay in our hearts. Appealing to the inner-teenager in each of us, the story, and more importantly the dialogue, makes “Napoleon Dynamite” one of the most quoted movies of our time. Napoleon Dynamite makes us laugh – and laugh hard – over and over again.

About Community First Night Owl Cinema: Celebrating six years since the inaugural Community First Night Owl Cinema Series, the beloved movie nights draw thousands of moviegoers who come to enjoy family-friendly films projected on a giant 18 by 32-foot screen on the St. Augustine Amphitheatre stage. Community First Credit Union’s support allows the Amphitheatre to provide this community entertainment. “We are excited to announce that the series is back and especially thrilled to kick it off with such a fun film like ‘Napoleon Dynamite,’” explained Ryan Murphy, Director of the St. Johns County Cultural Events Division, the organization that owns and operates the St. Augustine Amphitheatre. “The series is something people really look forward to. It is directly because of Community First Credit Union’s support and their commitment to positively impacting the communities it serves that people of all ages can enjoy this series.” The full film series will include four additional movie nights to be announced this Spring.

“We are proud to continue our support of creative and exciting events at the St. Augustine Amphitheatre,” said John Hirabayashi, CEO and president of Community First. “This will certainly be a special evening for fans of Napoleon Dynamite.”

Alice and Don Tossi marked their 50th wedding anniversary Feb. 20, with a reception at the Nativity Catholic Church Parish Center, Longwood. More than…