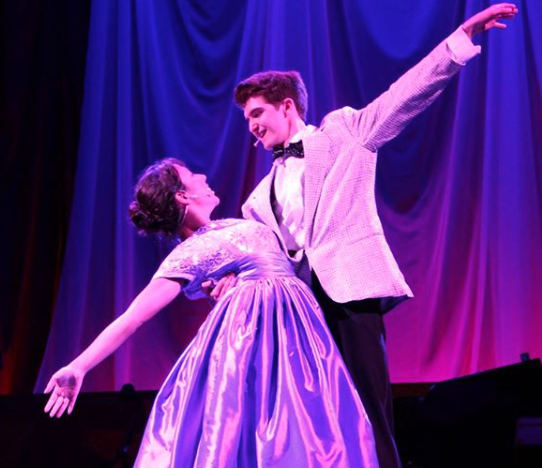 A scene from White Christmas. Photo from instgram.com/fctheatrearts/

Based on the classic film with a book by David Ives and Paul Blake, and music and lyrics by Irving Berlin, the story follows the adventures of two Army veterans as they make their way to a Vermont lodge to perform their song-and-dance acts for guests. The two men meet two sisters during their trip, and romance ensues.

The show will feature a live band with costuming by Flagler’s designer Elaina Wahl-Temple and a concert-style set designed by Paul Denayer. Local choreographer Kim Ball has included upbeat tap dance routines for the production.

“It’s a feel-good, family Christmas musical that we hope will be a huge community event,” Assistant Professor Kip Taisey said.

“Irving Berlin’s White Christmas” will run at Flagler College’s Lewis Auditorium, located at 14 Granada Street from Nov. 15 to 17at 7:30 p.m. and Nov. 18 to 19 at 2:00 pm.  Tickets are $20 and can be purchased at tickets.flagler.edu and are available now.  Tickets may also be purchased directly at the box office beginning Nov. 13, Monday through Friday, 12 p.m to 5 p.m., and one hour prior to curtain. Students (non-Flagler students) with their ID may receive a discounted $5 ticket. Flagler faculty, staff and students may obtain one free ticket directly at the box office. The box office phone number is 904-826-8600.

In addition, Flagler’s student organization ASTEP (Artists Striving to End Poverty), in conjunction with Flagler’s Office of College Relations, will be using the production as a vehicle for a toy drive to support the children of families severely impacted by Hurricane Irma.  The drive will organized through Amazon.com. Those interested in contributing can visit here: www.flagler.edu/toydrive.

May 15: Art Transcends Boundaries presents I, HOPE with guests from Limelight Theatre & The Dance Company

I, HOPE is the Avant Garde Show by Chrissy Das.The St. Augustine creative community continues to grow and change with increasing talent from Art Transcends Boundaries (ATB), an inclusive arts program from The Arc of the St. Johns, designed to develop the creative talents and skills of the special needs community.