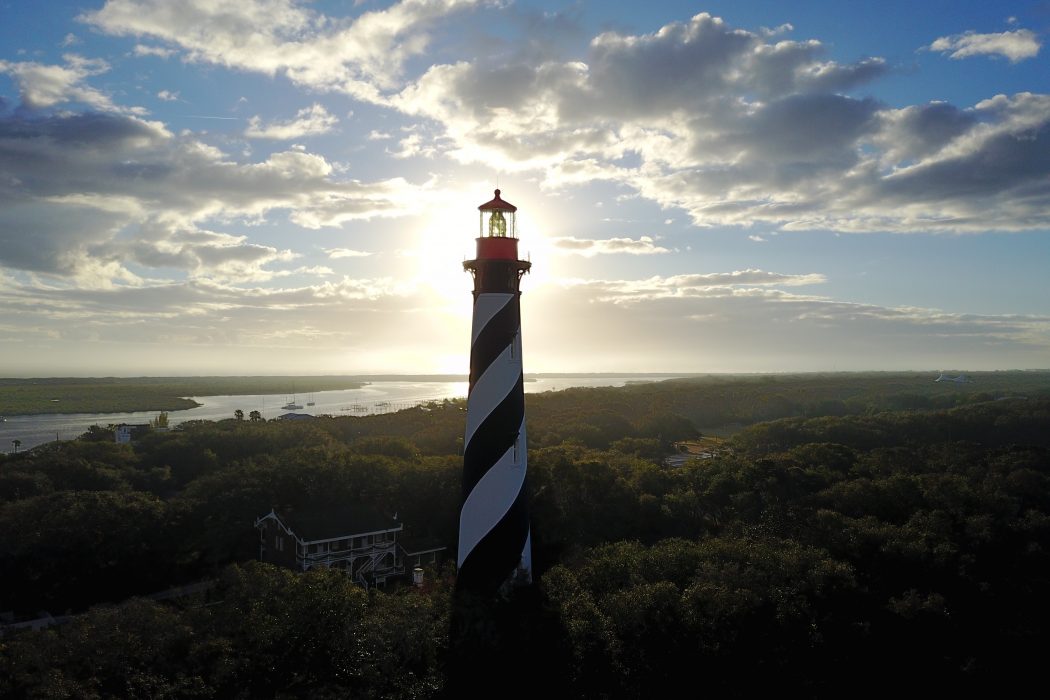 The St. Augustine Lighthouse & Maritime Museum celebrates 145 years of maritime history in the current historic, lighthouse tower. The second lighthouse at St. Augustine was built from 1871 to 1874 and topped by the first-order Fresnel lens from Paris, France. The first lighting was by Keeper William Russell on October 15, 1874.

“The tower stands testament to a maritime heritage that is one of the foundations of our community. Our lovely light is a symbol of safety, security, and community service, the front porch light for our community, one that has seen the likes of Henry Flagler, the development of the Alcazar Hotel, the Spanish American War, the building of the Bridge of Lions, two world wars, and the development of a modern, shrimping fleet that literally changed the foodways of the United States. It is right that we should celebrate its anniversary,” said Kathy A. Fleming, the Museum’s Executive Director since 1994.

The oldest brick structure in St. Augustine, and listed on the National Register of Historic Places, the St. Augustine Lighthouse beacon is a private, but active aid-to-navigation, with the original lens shining kept shining through the efforts of the Museum’s staff and corps of 270 volunteers.

The tower and lens were saved by the Junior Service League of St. Augustine (JSL) between 1980 and 1998, when a separate community-based Board of Trustees took control of the Museum. The 1876 Keepers’ House burned in 1970 and was threatened with demolition. Initially, 16 women in the JSL stepped in to accept ownership from the County of St. Johns, turning back the bulldozers and restoring the house. They opened it as a maritime museum, with an idea of helping others.

“Sherry Butler Bowen was one of the women with that earliest vision,” said Fleming. “She was followed by countless others in our community who keep the torch alight.”

In 1991, Margaret McClure Van Ormer approached the United States Coast Guard about acquiring the historic lighthouse tower; the Coast Guard agreed, and at Margaret’s suggestion, they agreed to paint it first.

In 1993, the JSL celebrated the completion of the restoration project with the first Community Day, including the relighting of the original Fresnel lens and fireworks. The event garnered 5,000 visitors and drew national attention with CNN covering what was then the first restoration of a Fresnel lens in the world. 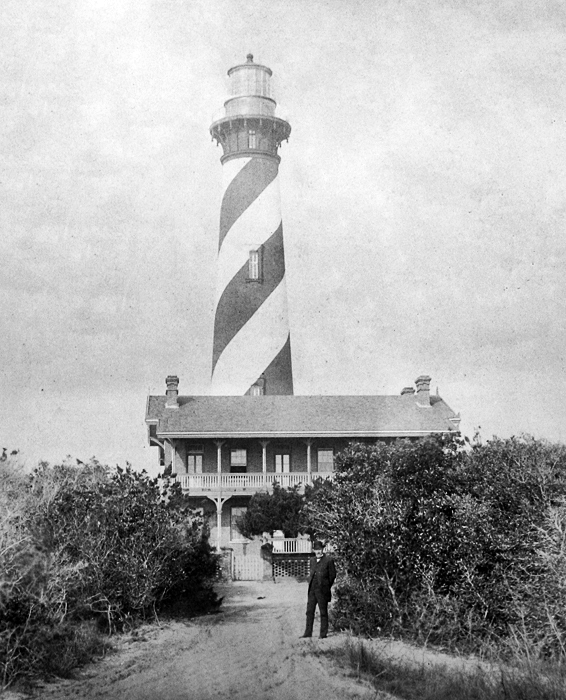 To mark the 145th anniversary, the Museum will celebrate with the public from 9 a.m. to 6 p.m. on Tuesday, October 15, 2019. St. Johns County Residents are free that day if they mention the passcode “JSL.”

Then from 6 pm to 8 pm on October 15, the Museum will hold its Annual Meeting of the Members, which will feature a birthday cake. The speaker will be Executive Director and JSL Active Sustainer, Kathy Fleming, who will share some lighthouse stories.

There will be a recognition for Architect Ken Smith (Kenneth Smith Architects of Jacksonville). Smith oversaw the restoration of the tower working with then Museum director, the late Cullen Chambers. Smith has continued to oversee preservation efforts at the historic light tower ever since. 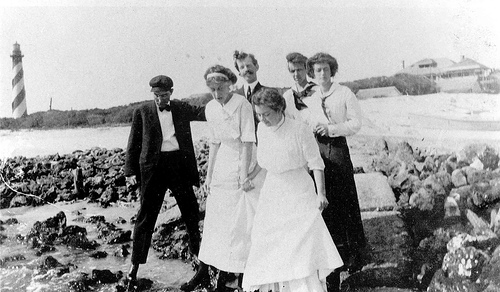 When it became evident that the first St. Augustine Lighthouse (called the Old Spanish Watchtower) was doomed to fall into the ocean, the U.S. Congress appropriated $100,000 funding for a new tower. The U.S. Lighthouse Service began construction on a new 165-foot lighthouse in 1871 and it was completed in 1874. Local African Americans and Lighthouse Service Professionals worked together on site.

More than 1 million bricks came by boat from Alabama, along with granite from Georgia, and steel from Pennsylvania. Supporting the lighthouse is a poured concrete foundation that begins 8 feet below grade, and rests on a naturally-formed coquina shell-rock underpinning. A concrete and masonry base of 10 feet 9 inches rests atop the foundation. Wall thickness is 5 ft 8 inches at the base of the 165-foot-tall tower (a masonry, truncated cone).

On October 15, 1874, lighthouse keeper William Russell lit the oil lamp inside the new, first-order Fresnel lens for the first time. He most likely walked to the tower from his residence at the old St. Augustine Light Station, upon which the sea was rapidly encroaching. The lens is 9-feet tall, and Russell would have had to climb inside it to light the lamps.

The jewel-like lens was handcrafted just for St. Augustine in Paris, France by the company of Sauter & Lemonier. It represented the height of Victorian engineering and technology and cast its beam much farther out to sea than its predecessor. The new light demonstrated three fixed-flashes, from three bulls-eye panels that could be seen from up to 24 nautical miles depending on atmospheric conditions. Fueled by lard oil, and then kerosene the first light would have given a glowing, yellow-hued light.

On February 28, 1889, The Saint Augustine Weekly News described the lens in the following manner, “The lamp was a brass cylinder of 10 gallons capacity. Inside it has a heavyweight, which governs the flow of oil to the burner. The burner has five wicks in concentric circles…The globe is a huge case of glass, which revolves around the lamp every 9 minutes. It makes a flash every three minutes when a big bulls-eye lines up between the lamp and the human eye. The cage weighs two tons.”

In 1955 the light was automated by an astronomical clock, automatic lamp (light bulb) changer and backup generator. The night mark changed at this time as well. Today an electric motor controls rotation speed, and one fixed white flash, every 30 seconds, shines across our home town.

The Museum provides a host of services including donations of more than $300,000 annually in goods and services to other nonprofits. The team preserves six historic buildings and holds over 19,000 artifacts in trust for future generations. Educational Programs, Maritime Archaeological Research, Heritage Boat Building, and an active volunteer program of 300+ volunteers help build wellness, job experiences for young people, and civic engagement.