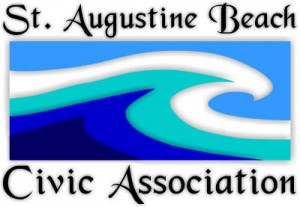 In a message to members, Bill Jones, president of St. Augustine Beach Civic Association,Â asks for input on parking problems that have been plaguing the beach pier area and whichÂ recently got worse.

In an open letter, Jones wrote, â€œThe concern about parking in and around Pier Park is theÂ hottest topic in town. Running a close second are the rumors about the future of Pier Park andÂ the impact of the new hotel coming to the north.â€

Jones was referring to the partial demolition and eventual rebuilding of the formerÂ Beachfront Hotel located adjacent to Pier Park. The 160 unit rundown hotel was sold in JanuaryÂ for $4 million and restoration is now underway.

Until recently, when the free parking lot at Pier Park fills up, patrons of the pier and parkÂ and nearby beaches have relied on local vacant areas for additional free parking including theÂ land across the road which is now the site of the Salt Life Food Shack, and understandably, nowÂ off limits to non-patrons.

In order to find out where the community stands on the parking dilemma, the CivicÂ Association is conducting a survey that is available online and is also being distributed at theÂ Wednesday Market and Music by the Sea Concerts.

The public is invited to participate in the survey which is available onlineÂ atÂ http://conta.cc/1iqiD6Y

Jones stresses that the purpose of the survey is to lead the community in a productiveÂ discussion of the current parking and Pier Park issues while gathering information from as manyÂ local beach and Pier Park users as possible.

â€œWe will then share that information with theÂ decision makers,â€ he said.

Among other questions, the Civic Association survey asks for opinions on the possibleÂ relocation of the volleyball courts to the beach area and the Childrenâ€™s Garden and Bocce BallÂ Courts to Ron Parker Park, allowing parking along 16thÂ expeditious plans to close the current fire station located at the pier and build a new one at

Jones noted that the survey is not sanctioned or approved by the city or county.

â€œThe Civic Association wanted to do a survey to accomplish a couple of things. TheÂ results will be presented to both city and county commissions as well as the St. Johns CountyÂ Parks and Recreation Department in an effort to assure that the needs and wants of theÂ community are met,â€ Jones stated.