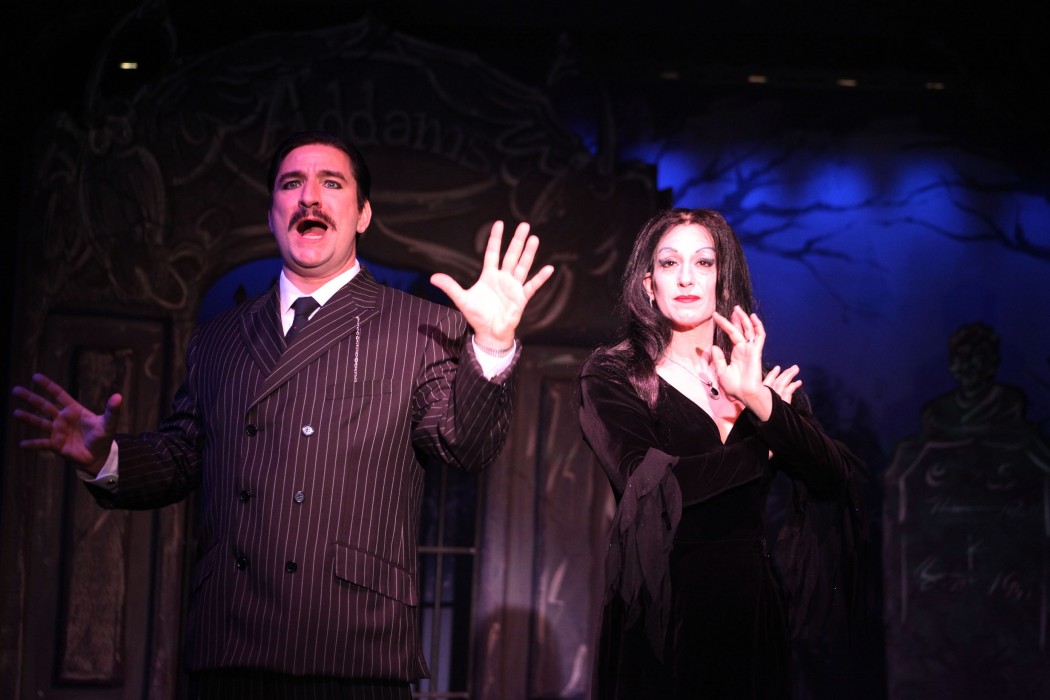 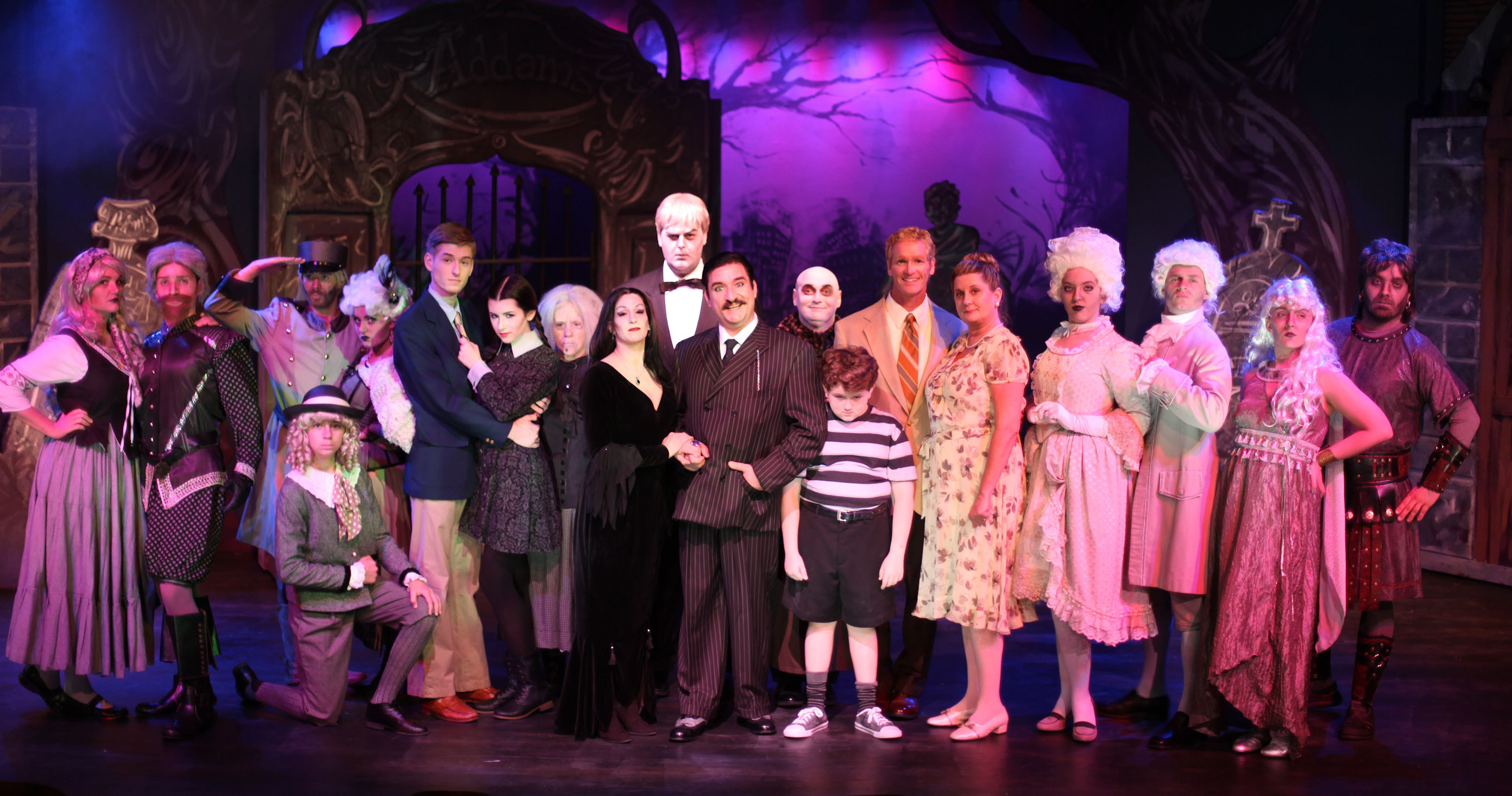 Oh, what ghouls we mortals be. Especially The Addams Family. We love them to death, every single one of them. Because theyâ€™re so alive, so extraordinarily talented, singing, dancing, carrying-on exuberantly, inexhaustibly (each performance running 2-1/2 hours) on the Limelight stage, throughOctober 19.

The cast is large. In addition to the seven family members featured on posters and ads, thereâ€™s an ensemble of eight â€“ four women, four men â€”Â plus the suitor and his parents. Total 18.

Letâ€™s start with the heads of family: Gomez and Morticia. Nathan Lane and Bebe Neuwirth starred in these roles on Broadway. Theyâ€™ve more than met their match here, with our own Dave Alan Thomas and Lisa Black delivering knockout performances â€”Â song, dance, dramatic dialogue â€”Â top-tier professional triumphs. What a treasure these two are.

Youâ€™ll remember Dave Alan Thomas. He was Willy Loman in Limelightâ€™s â€œDeath of a Salesman,â€ and King Arthur in last yearâ€™s â€œSpamalotâ€ â€“ he is every bit as effective and powerful here, and more.

Lisa Black probably has the longest acting history with Limelight of any of the many hundreds who have graced its stage. In 1992, twenty-two years old and freshly married, she starred as Libby Tucker in Limelightâ€™s first show “I Ought to Be in Pictures,â€ at the Monson Lodge, Limelightâ€™s first venue, when Limelight was dinner-theatre. Six years later, she starred memorably as the pooch, Sylvia. The Limelight by then had relocated to its own space west of US 1. And so many more: “Pump Boys and Dinettes”; Â “Picasso at Lapin Agile”; “The Apple Tree” (her first working with Gary CadwalladerÂ and Brian O’Keefe) “Too Darn Hot” (again with Gary and Brian); “Curious Savage” (first show in the current location); “Proof”; “Rumors” (Gary directed); plus others …Â the full 23 years! As demonic Morticia, drenched in black mascara meant to emphasize her evil, sheâ€™s as sensuous and sexy as ever,

Kayla Alvarez, in her Limelight debut, is sensational as the rebellious 18-year old daughter,WednesdayÂ by name, who wants to marry Lucas. She even bears a striking resemblance to her stage Mom, Morticia. Kayla is destined for stardom, no doubt.

Thomas Muniz, with his continuous, hilariously funny routines as Uncle Fester, runs off with the comedic honors. Bam. Zoom. To the Moon.

Evan Gray, whoâ€™s definitely Broadway-bound, is 10-year-old Pugsley. He sure knows how to deliver screams of terror on the torture rack.

James â€œDezâ€ Desmond graciously accepted the robotic role as towering butler, Lurch. The audience howls with appreciation, every time, at his response to the command, â€œHurry!â€

Grandmama is Deborah Hurm Cassano, under a white wig. She could pass as an escapee from The Beverly Hillbillies.

Butler Robertson returns to the Limelight stage as Lucas, smitten by and intent on marryingWednesday. But whoa! Heâ€™s a sweet young man from a respectable family, and you know thatâ€™s gotta mean trouble.

Andrea McCook, breaking away from her Professor-of-Theater-Arts desk at Flagler College, to do a periodic performance, is Lucasâ€™ Mom. When out of her mind with drink, she lets loose atop a banquet table, and brings the house down.

Brian Johnson, who was Trip Wyeth in â€œOther Desert Cities,â€ is Lucasâ€™ Dad, desperate to get a handle on this nutty Addams gang. He does get to sing, too, just one song toward the finale. Heâ€™s good!.We look forward to seeing more of him.

About the Ensemble: Thereâ€™s so much to say about them, and so little space remaining, so if you (and they) will forgive me, Iâ€™ll just urge you to see them in action. They are outstanding. The women: Madi Mack, Maria Helfrich, Alison Zador, Morgan Williams. The men: Brian H. Matthews, Will Gallagher, Ryne Renz, E-Rock Rasmussen.

The plot? Not particularly important â€”Â the show is one terrific, continuous musical extravaganza. Over two dozen numbers. The story: A ghoulish take on proper-boy-meets-girl-from-crazy-family, dating back to â€œYou Canâ€™t Take It With You.â€