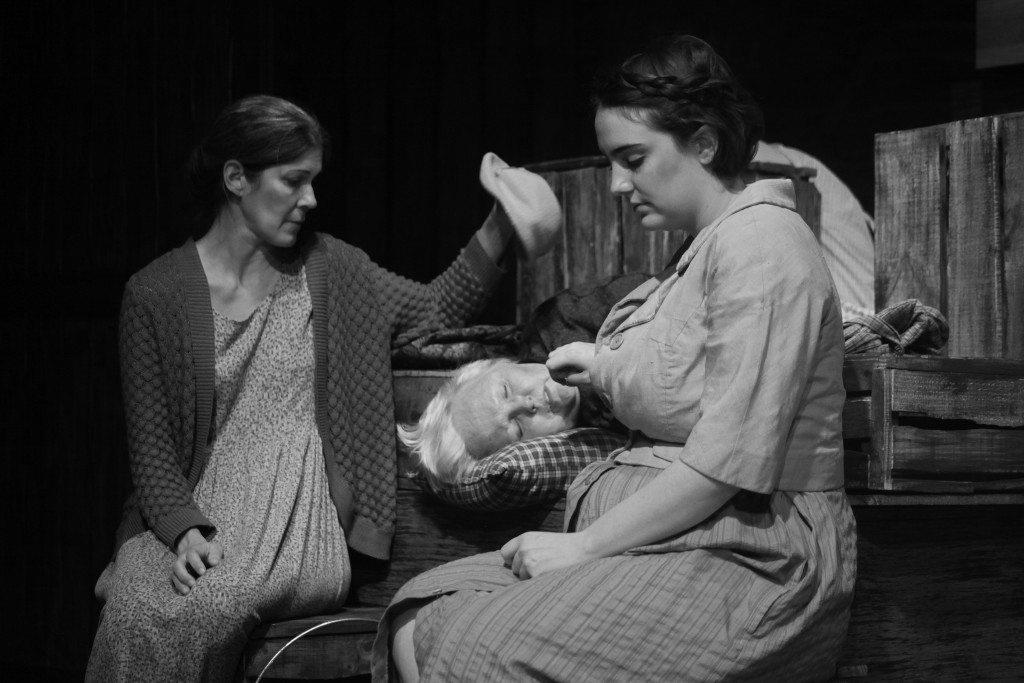 Jessica Ferris as Ma Joad; Vanessa Warner as Granma Joad; and Maria TolzmannÂ as Rose of Sharon, in a scene from The Grapes of Wrath, on stage through Feb. 14 at Limelight Theatre. Photos by Renee Unsworth

In the 1930s, at the depths of the Great Depression, when John Steinbeck wrote his epic novel about dispossessed â€œOkiesâ€ heading west in search of the promised land of California, he was also writing about a nation in search of itself. What could the survivors believe in? Does this have a familiar ring in todayâ€™s America?

Forced off the land that the family had share-cropped for two generations, the Joads â€“ Grampa, Granma, fugitive son Tom, and a large family horde, packed onto a ramshackle truck and headed west on Route 66, expecting to find plentiful jobs picking fruit or cotton in fertile valleys.

A quarter-million refugees from the American midwest â€”Â Oklahoma, Arkansas, Kansas and Nebraska, reduced to a windswept dustbowl by devastating drought â€”Â undertook the daunting trip.

In 1940, movie director John Ford brought Steinbeckâ€™s passionate description of the Joadsâ€™ plight to the screen in an award-winning filmÂ Â starring Henry Fonda. It finally made it to the Broadway stage in 1988.

Thereâ€™s reason for the half-century delay: The formidable (insurmountable?) technical challenges. Challenges met and overcome: It won the 1990 Tony Award for Best Play.

Not to be intimidated, Beth Lambert,Â Â Limelightâ€™s Executive Director, given the green light by the Board of Directors headed by Scott Bartosch, assigned the directorial challenge to Dave Alan Thomas. It opened January 22 with an incredible cast of 27 actors, singers, and musicians, and continues throughÂ February 14. Itâ€™s a triumph. This is an opportunity no serious theatergoer should let slide by without exerting every effort to see it.

The Playbillâ€™s Directorâ€™s Notes are eloquent and moving: â€œWhatever one might believe â€”Â in politics or religion â€”Â I find, and I believe audiences will find, themes, characters, and story elements to connect to, emotionally and intellectually. The struggles of the Joad family and their determination to survive and persevere are hauntingly admirable and demand our respect.â€

He also draws comparisons to todayâ€™s political wars. â€œThe playâ€™s thematic issues are even more prevalent, given the presidential election cycle now in full swing. The newly displaced people …Â were treated as poorly during their exodus as any you hear about today. Â Seeing this family strive against enormous odds and obstacles allows audience members to identify that very capacity within themselves.â€

I was particularly impressed by the technique employed to convey the dilapidated truck and the repeated, harduous loading and unloading of household amenities: An enormous platform on hidden wheels piled high with dozens of large, identical â€œcratesâ€ of weathered wooden strips, withÂ Â spaces for persons to sit or lie down to rest, sleep (or die), and two battery-powered â€œbattle lanternsâ€ for headlights. Several men leaning into it get it turned, moving or stopped.

Hats off to a superlative cast, particularly:

Jessica Ferris as Ma Joad, barefoot and worn, conveys the strength and determination that binds the family together.

Vanessa Warner and Rich Nowell are Granma and Grampa Joad.

The entire ensemble of young, fresh faces, adding their voices, musical talent and dancing to complete the package. Congratulations all! 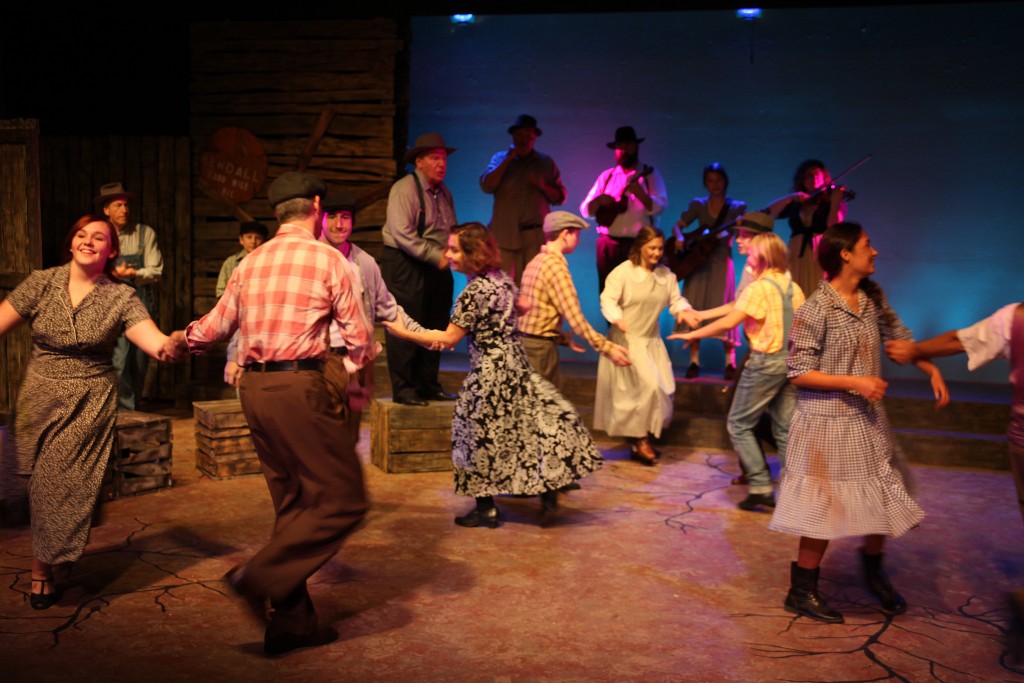 The cast of local actors and musicians during a square dancing scene in The Grapes of Wrath, on stage through Feb. 14 at Limelight Theatre, 11 Old Mission Ave., uptown St. Augustine.

By Renee Unsworth When you serve mile-high award-winning burgers at your restaurant, you may be asked to be on a TV show. And that’s…