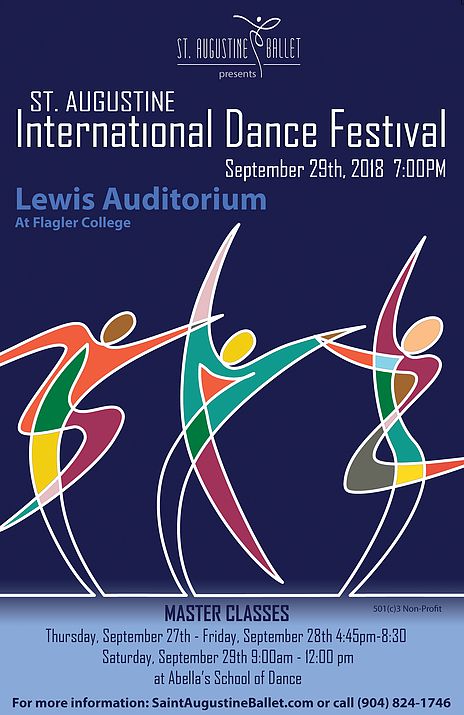 St. Augustine, FL — Saint Augustine Ballet will host the International Dance Festival featuring ballet, contemporary and modern dance master classes and a performance for the public with International Professional and Pre-Professional Dancers at 7 p.m. Saturday, September 29 in Lewis Auditorium at Flagler College, 14 Granada St., downtown St. Augustine. Tickets are $15, available at the door one hour prior to the performance.

Master Classes in Ballet, Contemporary and Modern, as well as Q & A’s with Guest Artists are available September 27-29. See the schedule below. For details, call 904-824-1746.

Jessie Dominguez trained at the National School of Ballet earning numerous awards which include Silver Medals in 1998 and 1999 and Bronze in 200. She graduated in 2001 and became a member of the National Ballet of Cuba. Soon elevated to principal dancer, her repertoire featured roles in the great romantic-classical tradition such as Giselle, Don Quixote, and Swan Lake and numerous contemporary works by Cuban artists. She has toured internationally and performed on the most important stages in Latin America, Europe, Asia, Africa, Australia, Canada and the U.S. Dominguez joined Dance Alive National Ballet in 2016, where she has featured roles included Don Quixote, Nutcracker, Vampyra, Who Speaks, The Ring and L’Amour. She excels in dramatic characterizations and brings to the stage a bold passion.

Trained at the National Ballet of Cuba, Aaron Gomez was soon moved into the professional company due to his ability and technical strength. A tall, strong, athletic dancer, Aaron joined Dance Alive National Ballet in 2017. He has been featured in Constellations, Cinderella, Requiem, L’Amour and Who Speaks. Gomez is the rare dancer who can combine strong technique, strong characterizations, and an undeniably strong stage presence. He thrives on original choreography as well as the classics. His classical repertoire includes roles from Nutcracker, Don Quixote, Le Corsaire, Diana and Acetone, Giselle, and Sleeping Beauty.

Orlando Molina began his training at the age of 10 in Cuba. In 1996, he directed and performed with Trujillo Ballet in Peru. In 1998, Molina was a competitor in Jackson International Ballet Competition in Mississippi, and the same year he was offered a contract with Cleveland Ballet. In 2000, Molina joined Orlando Ballet under the direction of Fernando Bujones. For the 2002-2003 season, he was appointed ballet master. In 2003, he coached Joseph Gatti, gold medal winner at the Youth American Grand Prix and recent gold medal winner at the New York International Ballet Competition. He has been a guest teacher with Spartanburg Ballet, Texas Christian University, Alabama Dance Theatre, Jackson Mississippi Metropolitan Ballet, and most recently at Kowa Ballet in Okayama, Japan, and Ohio Dance Theatre. Molina has performed in Saint Augustine Ballet’s production of the Nutcracker since it began 10 years ago.

Herman Ramos originally hails from Northern Virginia where he did not grow up with any formal dance training. Instead, he became a specialist in breakdance and hip hop choreography with the help of various crews from the D.C. area and central Florida areas over the last decade and a half. In 2008, Herman was given a full ride scholarship to Santa Fe College in Gainesville, Florida. From 2008-2011 he worked simultaneously in contemporary and hip hop styles; touring with Apocalypse Dance Crew regionally and working locally with the Danscompany of Gainesville. He completed his post graduate studies of Florida State University with a Masters of Fine Arts Degree. As a guest teacher, he has taught at Santa Fe College, South Eastern Regional American College Dance Association and the American Dance Festival in Durham, North Carolina. Choreography projects include FSU, the Red Project (NYC), Rosie Herrera Dance Theatre (Miami), and T Lang Dance (Atlanta).

My Morning Jacket to perform Aug. 1 at St. Augustine Amphitheatre