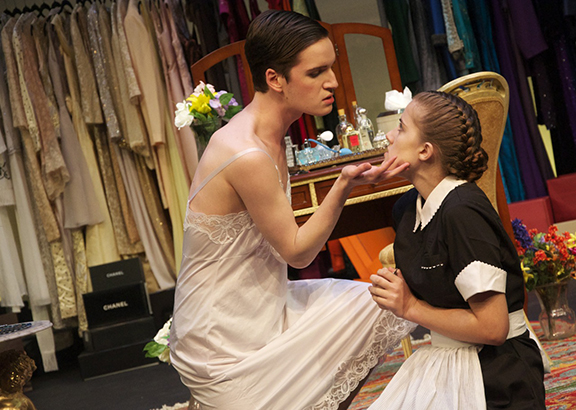 Students Brian Matthews and Sissy Hofaker in The Maids. Photo by Nikki Falcao

This is the first time Flagler College has been recognized at KCACTF nationally.

“Having the Theatre Arts Department’s production of ‘The Maids’ recognized in this way is an incredible honor,” said Associate Professor and Department Chair Andrea McCook. “These awards and attending the national festival is a once-in-a-lifetime opportunity.”

McCook also emphasized broad institutional support for the department’s participation in the festival.

“From Dean (Alan) Woolfolk and the Office of Academic Affairs, to Barbara Blonder and the Office of Undergraduate Research and to the Business Office, we are extremely grateful to the institution, which made it possible for the production to go to the regional festival, where we were noticed on the national level,” she said.

KCACTF hosts the Irene Ryan acting competition and is comprised of a network of more than 600 schools throughout the country. Theater departments and student artists showcase their work and receive outside assessment by KCACTF respondents. Of the eight regions nationally, Flagler College is a part of Region IV. This year’s competition, held at Georgia Southern University, took place Feb. 8 to 11.

The students, along with Kemper and Wahl-Temple, will be attending the national festival at the Kennedy Center in Washington, D.C. the week of April 18, 2017.

Flagler College is a private, nationally-ranked college located in St. Augustine, Fla. The college offers 31 majors, 36 minors, two pre-professional programs and a master’s degree in Education of the Deaf/Hard of Hearing. Flagler College has an enrollment of about 2,500 students, as well as a satellite campus in Tallahassee, Fla. U.S. News & World Report and The Princeton Review regularly feature Flagler as a college that offers quality education at a relatively low cost. A Flagler education is less than half the cost of similar private colleges, and competitive with many state universities. A relatively young institution (founded in 1968), Flagler College is also noted for its historic beauty. The centerpiece of the campus is the former Hotel Ponce de Leon, a National Historic Landmark built in 1888 by railroad pioneer and Standard Oil co-founder Henry M. Flagler. For more on Flagler College, visit www.flagler.edu.