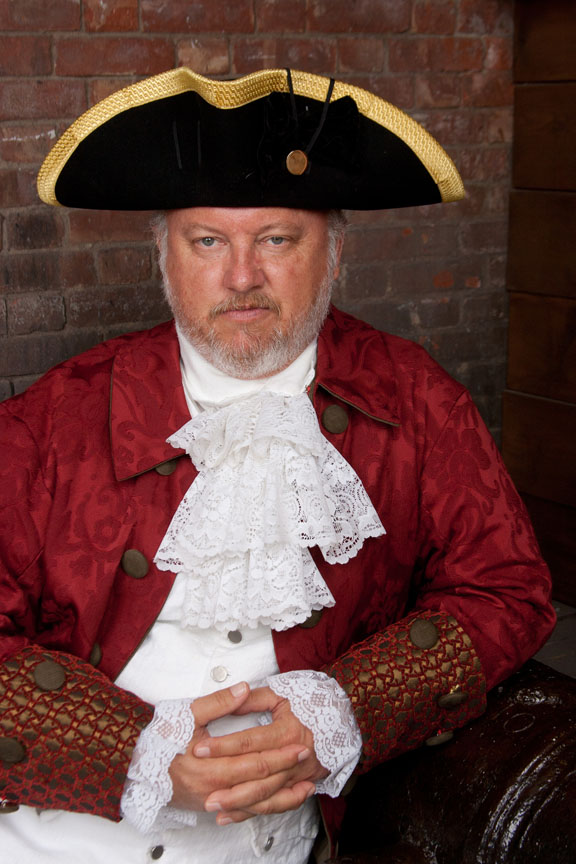 The Womanâ€™s Exchange of St. Augustine will offer a special free program on Sept. 5, during the city-wide celebration of St. Augustineâ€™s 450th birthday â€“ a tribute to Governor Patrick Tonyn, the last British governor in North America, south of Canada. He ruled the British Colony at St. Augustine in East Florida from 1774 until the 1785 when the British occupation ended.

Sept. 5, Dr. Roger Smith, Ph.D., who portrays Tonyn in historic programs, will speak from â€œhis former home,â€ now the PeÃ±a-Peck House at 143 St. George St., one block north of the Plaza. The Womanâ€™s Exchange of St. Augustine maintains the site on behalf of the city of St. Augustine.

Smith, in Tonynâ€™s persona, will speak at 10:45 a.m. on Tonynâ€™s St. Augustine years. That will be followed by a book-signing for Smithâ€™s book, The 14th Colony: George Washingtonâ€™s Planned Invasions of East Florida. The book is about Georgeâ€™s Washingtonâ€™s plan to take control of East Florida from the British. Smithâ€™s book may be purchased at the Womanâ€™s Exchange gift shop. The book signing will continue until 1:30 p.m.

The Sept. 5 event is part of the Womanâ€™s Exchangeâ€™s five-day 450th Celebration â€œgift to the community.â€

The PeÃ±a-Peck House was built circa 1750 for the Spanish Royal Treasurer Juan Estevan de PeÃ±a. It later was the home of two British governors, other tenants and owners, and three generations of an American family, 1837-1931. The last Peck granddaughter, Anna Gardner Burt, died in 1931 and left the house to the city to be a house museum. The Womanâ€™s Exchange has maintained the home since 1932.

According to Smith, Government House on the Plaza became the home of the new Spanish governor. But, Tonyn was still in charge of all British matters during the 16-month dual occupation of the colony, including the command of two companies of light horse (cavalry) needed to protect St. Augustine from raiding bandits and potential attack from Georgia. During this time, his home became the sole seat of British power inside the borders of the present-day United States. Tonyn left East Florida for London on Nov. 13, 1785. He was the last British governor in North America, south of Canada.

Smith received his Ph.D. in Early American History and Atlantic World Studies, with a certificate of scholarship in Museum Studies, from the University of Florida in 2011. His work on the American Revolution in the South has received the Aschoff Fellowship Dissertation Award and the Jack and Celia Proctor Award in Southern History. He is now an independent research historian with Colonial Research Associates, and speaks across the South on his Revolutionary War research.

He is currently writing and producing a series of books on the significance of the South during the American Revolution, particularly from 1775 â€“ 1779. Smith has provided consultation for the AMC television series Turn and the up-coming PBS documentary on the 450-year-history of St. Augustine, â€œAmerica: Revised.â€ Smith has worked on projects with the Florida Humanities Council, the University of West Florida, the University of Florida, the City of St. Augustine, the St. Augustine Lighthouse and Museum, the Lighthouse Archaeological Maritime Program, and the Fountain of Youth Archaeological Park.

The Womanâ€™s Exchange web site is www.penapeckhouse.com. It is also on Facebook and Twitter. The phone number is 904-829-5064.

Nov. 23-Feb. 2: Nights of Lights in St. Augustine is a magical experience

Nights of Lights has been listed among the top ten holiday light displays in the world by National Geographic. And for a good reason. During Nights of Lights, St. Augustine glows with holiday magic – from the ground to the rooftops. St. Augustine’s Nights of Lights features millions of tiny white lights that create a magical atmosphere in the Nation’s Oldest City.