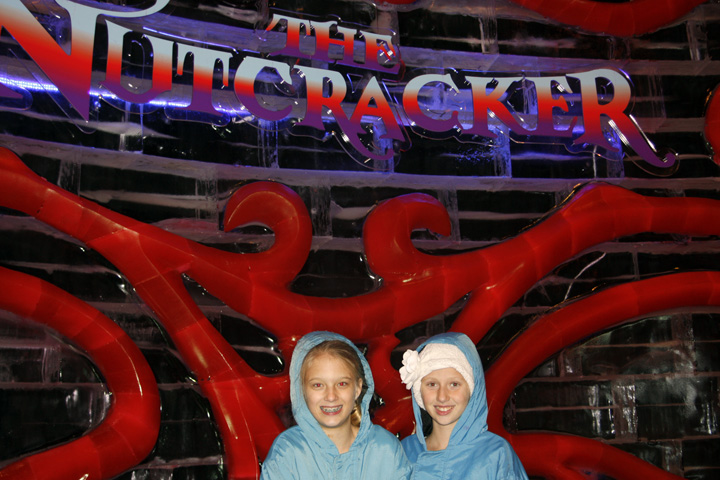 Jenny Albanesi and her friend, Evie, shiver through the Nutcracker Ice attraction at the Gaylord Palms Hotel in Orlando. Photo by Ed Albanesi

Took an excruciating trip to Orlando during Christmas break and thought I might highlight the lowlights for this column. Seething with anger I planned to headline my ramblings as, â€œWhy I hate Orlando.â€

Fact is I donâ€™t really hate Orlando. If anything, I love St. Augustine. I love my town because the things that happened to me in Orlando would never besiege me in St. Augustine.

My family and I decided to meet some good friends at Sea World in Orlando the Monday after Christmas. We expected heavier than normal crowds because school was out and theme park annual passes were about to expire. We hoped because Monday was a workday, the crowds wouldnâ€™t be crazy. We badly misjudged that last assumption.

We began our trip to Orlando about 9 a.m. on that fateful Monday. Traffic was light to moderate. We had little trouble negotiating downtown Orlando on Interstate 4 and reached the Sea World exit about 90 minutes into our trip. We took exit 1 off of 528, which dumped us onto International Drive. At this point we were less than two miles from the Sea World parking lots.

I would later learn that our first mistake was to not take the route suggested for buses and commercial deliveries. This would have saved us an immense amount of time. Instead I meekly followed the signs to Sea World parking.

I will not put readers through what my family and I went through. Suffice to say our less-than-two-mile trip to Sea World parking consumed an additional two hours of bonding in the family car.

While all this was happening I was thinking of a dear, longtime friend who, just a few weeks before Christmas, was laid off by Sea World. She had worked there for decades and was less than two years from retirement. I wryly calculated Sea World could have kept her on the payroll for two more years simply by utilizing the revenue earned from this dayâ€™s overflow parking.

We hooked up with our friends who had speedily made it to the parking are via the bus route. We decided to visit the Antarctica exhibit since our time at Sea World would now be limited and we had tickets for the Nutcracker Ice exhibit at the Gaylord Palms Hotel in late afternoon.

After waiting several minutes on line at Antarctica, Sea World officials announced there were technical difficulties with the exhibit and we could either stay on line (and pray) or roll the dice at another attraction. We opted for the former and managed to gain admittance to the wonderful world of penguins about 90 minutes later. While on line, we spent $24 for three beers that my wife correctly assumed were needed (at least in my case) to keep heads from exploding.

After exiting Antarctica we had just enough time to purchase $15 worth of dipping dots for the kids before making our way to the park exit.

My wife, daughter and I squeezed into our friendâ€™s vehicle (there were nine of us) and we were driven across the street to our car. We then began our trip from Sea World to the Gaylord Palms. Iâ€™m happy and somewhat surprised to report this journey was pretty much void of incidents.

The online Florida resident tickets we purchased for Nutcracker Ice were reasonable (a little more than $50 total for the three of us). Because the temperature in the exhibit is nine degrees, itâ€™s hard to spend more than about one-half hour enjoying the exquisite ice carvings. We parked in the Gaylord Palms lot and were charged nearly $20 for about an hourâ€™s worth of parking. Is gouging too strong of a word? I think not.

Iâ€™m glad I waited a few days to write this column because my wife, daughter, my daughterâ€™s friend from the Orlando trip and I spent several hours on New Yearâ€™s Eve in downtown St. Augustine.

Maybe the traffic at the beach was heavy but the traffic downtown was light and we managed to secure a free parking space.
The atmosphere was festive and the four of us ate dinner at a St. George Street establishment for about $40 (including four frothy adult beverages).

For less than $30, the four of us rode on a Night of Lights trolley tour and spent about 45 minutes singing Christmas Carols, enjoying the lights, waving to people on our route and wishing them all a Happy New Year.

And although we were all asleep before 2015 arrived, my wife called it the best New Yearâ€™s Eve she can remember ever celebrating.
So thatâ€™s why I decided thereâ€™s no need to hate Orlando. Why waste time doing so when I can simply love St. Augustine instead.

From St. Augustine Music Festival’s Artistic Director, Jorge Pena:  While circumstances do not allow us to perform in front of a live audience this…