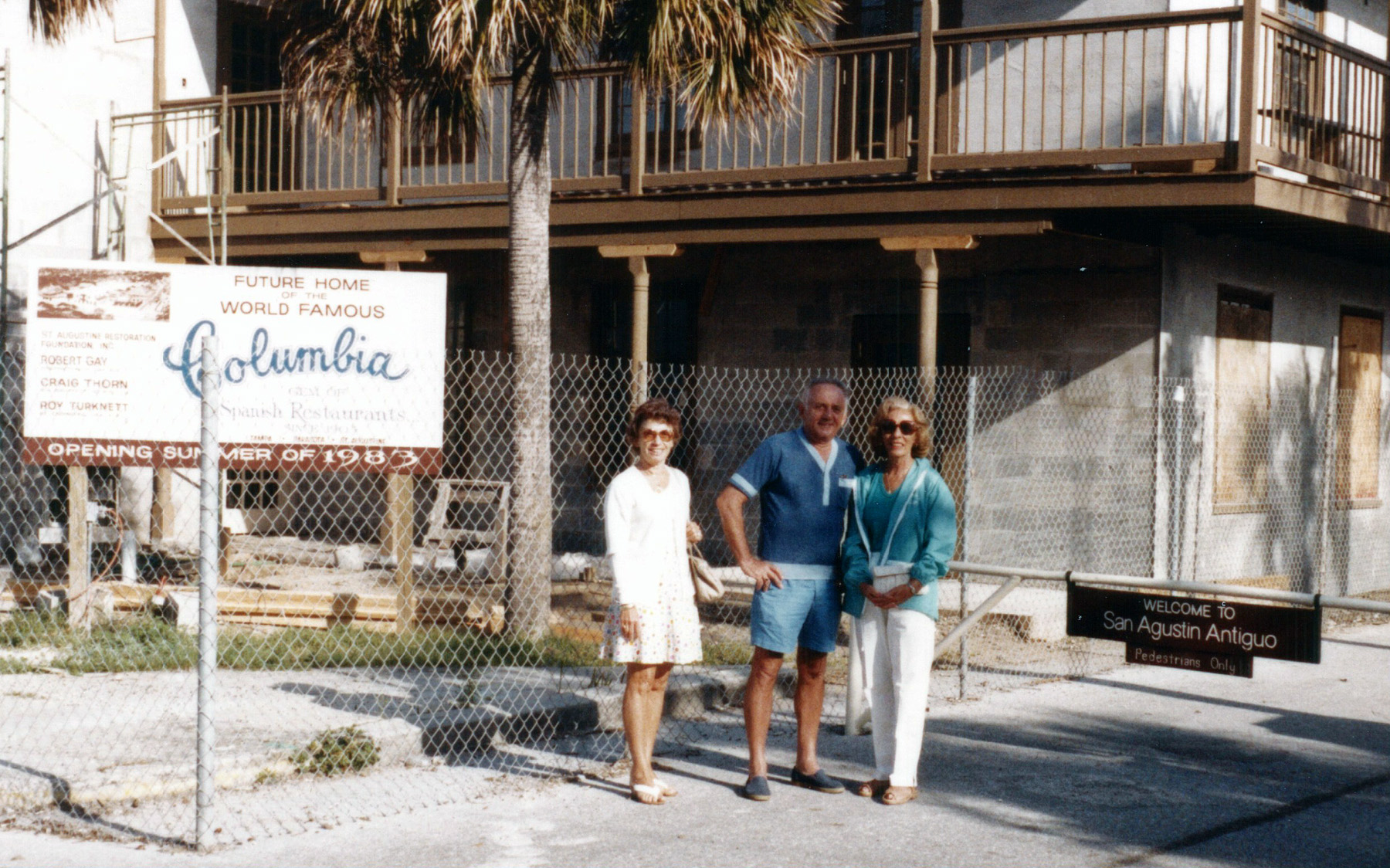 The authorâ€™s aunt, dad and mom visited soon after he and his wife moved to St. Augustine in February 1983. The Columbia Restaurant was under construction. Photo by Ed Albanesi

By Ed Albanesi
While St. Augustine celebrates its 450th birthday this year, I will be marking a lesser-known anniversary. Thirty-two years ago my wife, Carol, and I packed all our belongings into a U-Haul trailer and moved from Tallahassee into a brand new mobile home on a rental lot in Treasure Beach. I have now spent more than half my life in one of the worldâ€™s most beautiful places.

So much has changed about St. Augustine in the last three-plus decades. Luckily Iâ€™m getting too old to remember it all. But here are some things I do remember.

State Road 312 had only one two-lane span to get you from the island to the mainland. When you reached U.S. 1, the road ended. There was very little commerce on S.R. 312.

Riverside Center (Hobby Lobby, nee Albertsonâ€™s) was still a developerâ€™s dream. There was no Applebeeâ€™s, Outback, Chiliâ€™s or even Sun Bank. I think Pizza Hut (now Cantina Louie) was there, but my memory is a bit sketchy.

Flagler Hospital was located downtown about where the River House is now located. St. Augustine General Hospital occupied the building Health and Human Services is currently moving out of and will soon be replaced by a Lowes.

The Ponce de Leon Mall was fully occupied and thriving. It even boasted a Morrisonâ€™s Cafeteria on the left as you walked in the main entrance. The I-95 outlet malls had yet to be built. Same goes for the World Golf Village.

If you drove north from the city on U.S. 1 you werenâ€™t on your way to the County Courthouse Complex as it had not been built yet. However, you could stop off for a round of golf at the Ponce de Leon Golf Course (closed in 1991). If you had courthouse business you had to travel downtown and visit the building now home to the Casa Monica Hotel.

A-A from the Alligator Farm to all local points south was a two-lane road. There were very few businesses or housing developments along the way. Anastasia Plaza (Publix) had yet to be built. There was a Winn-Dixie, but it was located in the plaza where the Betty Griffin Thrift Store now resides.

The only Publix in town was situated in the shopping center on U.S. 1 about where you will now find Marshallâ€™s. Our recently closed K-Mart was the only big box store in town. Yep, no Walmart.

A few years after we arrived, Walmart finally made its appearance on the east side of U.S. 1, about where Staples was located before it moved across the highway.

The large home-improvement store in town was not Home Depot but a now-defunct operation that went by the name of Scottieâ€™s. It was located about where Barnes and Noble is now situated.

The Vilano Beach Bridge was a drawbridge. State RoadÂ 16 was a two-lane road as was State Road 207, all the way to Palatka. The Cobblestone shopping centerÂ was more than a decade into the future. Pedro Menendez High School didnâ€™t exist. The Columbia Restaurant had yet to open.

St. Augustine was a quieter but beautiful place to live in 1983.

In 1990 we purchased a home on the mainland where we now live. We drove through Treasure Beach a few weeks ago and â€œourâ€ trailer is (barely) standing at the end of a cul de sac. More than three decades later, weâ€™re still standing too.

And you know what, our town is still a very beautiful place.
Â

Evan Gray will play Pugsley at Limelight Theatre before holiday show By RENEE UNSWORTH At age 10, most kids have no idea what careers…