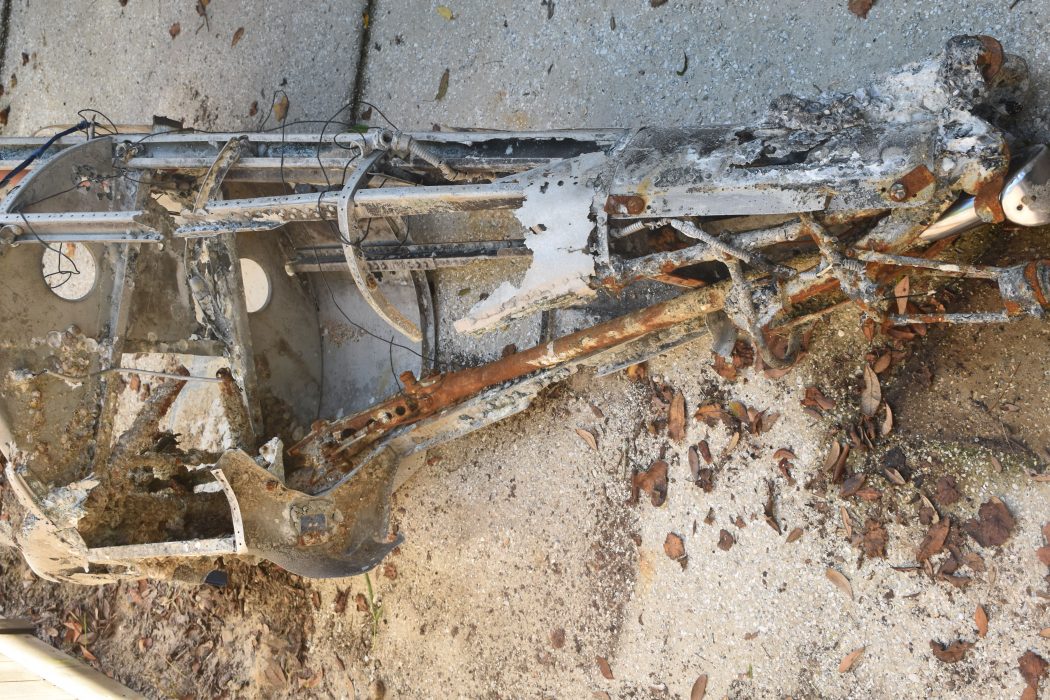 The St. Augustine Lighthouse & Maritime Museum received the tail section of a World War II-era plane that washed up along South Ponte Vedra Beach during the recent nor’easter.  The initial findings suggest that the part came from a F4F Wildcat, an aircraft produced by the Grumman Aircraft Engineering Corporation mostly based on aircraft carriers.    The section includes a tail hook suggesting it was carrier-based.  As the plane came in for a landing, the tail hook would catch on the arresting cable allowing the plane to come to a full stop.  Unfortunately, many of the training flights off the coast of Jacksonville ended in planes landing in the ocean due to electrical problems, engine problems and other faults with the planes. 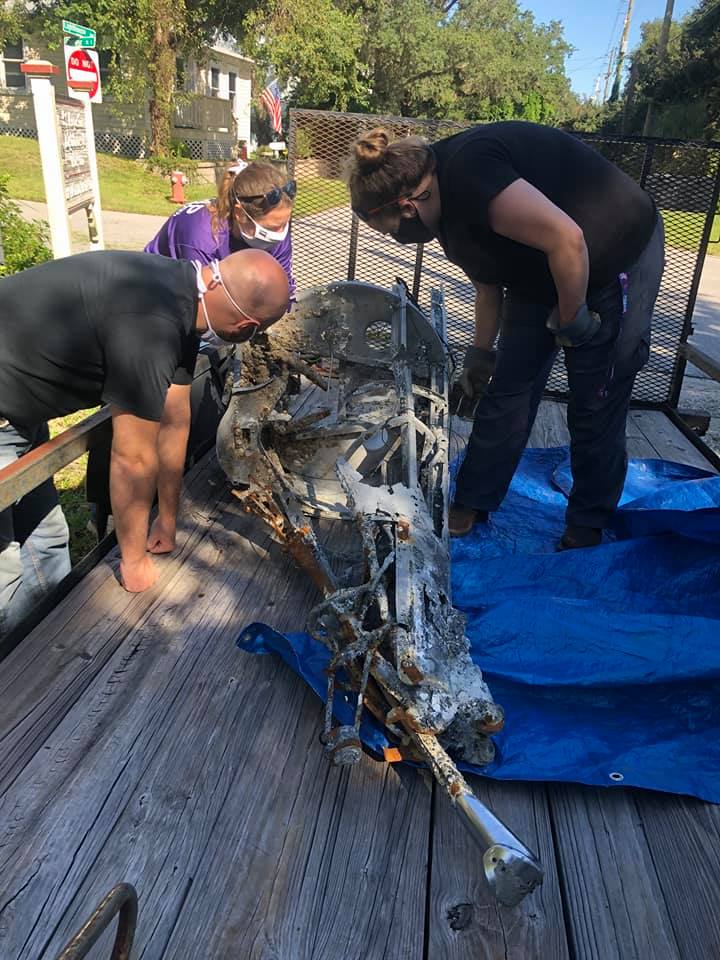 The cone arrives on the trailer to the St. Augustine Lighthouse & Maritime Museum.  Dorothy Rowland, Andrew Thomson and Starr Cox, all members of the Museum’s Conservation team, are on hand to evaluate the artifact.  (Photo courtesy of Chuck Meide)

Before any effort at conservation can be made, the Museum must get the approval of the United States Navy.  The Conservation team at the Museum will take photographs and look for markings that will confirm whether the tail cone came from a F4F Wildcat.  The team must also determine the best process to conserve the aluminum cone as it is not a very durable metal.

With the state-of-the-art Charles Cox Conservation Lab on site, the Museum is poised to help in the preservation of this important artifact.  Executive Director Kathy Fleming added, “We are really proud to be able to save this rare piece of the history of local heroes.  Our experts in underwater archaeology and museum education will help save it and share this story with future generations.” The nonprofit Museum provides a valuable resource through its commitment to conserving artifacts but also preserving the stories of the history of our community.

With the Museum’s recent addition of a World War II exhibit, “Guardians of the First Coast: Building Readiness for World War II,” the discovery of this piece of World War II history comes at an ideal time.  The Museum continues to work on several projects that record the history of North Florida during World War II.   During the war, men and women came to St. Augustine to train for warfare on the European and Pacific fronts.  In addition, the St. Augustine Light Station came under the supervision of the United States Coast Guard (USCG) which in turn came under the Department of the Navy during the war.  The exhibit tells the story of the brave men and women who served during the war through photographs, artifacts and video. 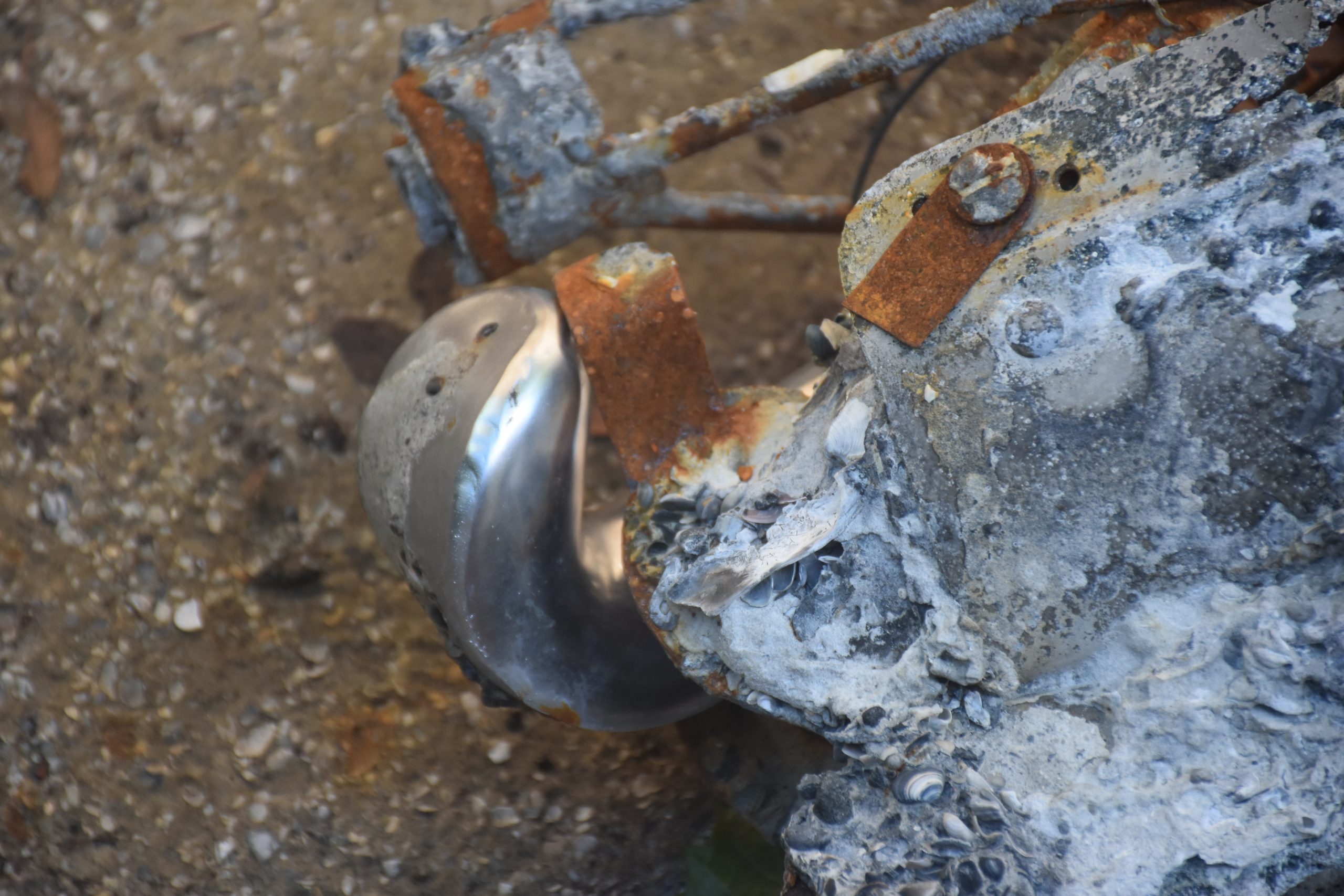 A close up photo of the tail hook made of stainless steel.  This feature leads the Museum to believe this tail cone came from a F4F Wildcat, a plane based mostly on aircraft carriers.  The tail hook would assist the plane in breaking when landing on carriers during World War II.

A pivotal navigation tool and unique landmark of St. Augustine for 145 years, the St. Augustine Light Station is host to centuries of history in the Nation’s Oldest Port®. Through interactive exhibits, guided tours and maritime research, the 501(c)(3) nonprofit St. Augustine Lighthouse & Maritime Museum is on a mission to discover, preserve, present and keep alive the stories of the Nation’s Oldest Port® as symbolized by our working lighthouse. We are the parent organization to the Lighthouse Archaeological Maritime Program (LAMP) and an affiliate of the Smithsonian Institution. (StAugustineLighthouse.org)

ABOUT THE AMERICAN ALLIANCE OF MUSEUMS:

The St. Augustine Lighthouse & Maritime Museum is accredited by the American Alliance of Museums (AAM), the highest national recognition afforded the nation’s museums. The American Alliance of Museums has been bringing museums together since 1906, helping to develop standards and best practices, gathering and sharing knowledge, and providing advocacy on issues of concern to the entire museum community. As the ultimate mark of distinction in the museum field, accreditation signifies excellence and credibility. Accreditation helps to ensure the integrity and accessibility of museum collections, and reinforces the education and public service roles of museums and promote good governance practices and ethical behavior. Representing more than 35,000 individual museum professionals and volunteers, institutions, and corporate partners serving the museum field, the Alliance stands for the broad scope of the museum community. (www.aam-us.org).

Hangar One Bistro at St. Augustine Airport to be featured on a German reality TV show

On Saturday, June 6, Hangar One Bistro will be celebrating a Grand Reopening to commemorate the restaurant’s reopening after regulatory restrictions due to the Coronavirus closed their doors. This special event will be filmed by crews from the “Goodbye Deutschland” reality TV show broadcasted on the Vox Network in Germany.