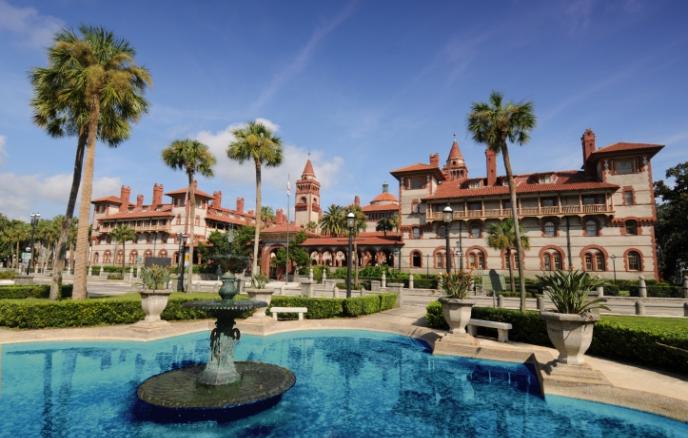 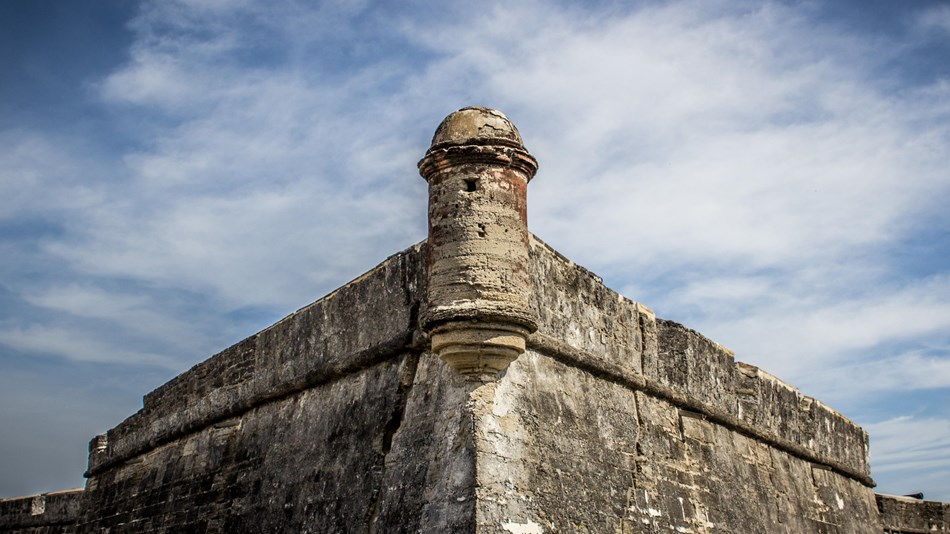 The Castillo de San Marcos, the oldest masonry Fort in the United States, has been standing since 1695. The fort sits on a 20.5 acre national park where tourists can step inside the walls of the fort and attend live re-enactments.

Climb the 219 steps to the top of the St. Augustine Lighthouse tower for incredible views of the ancient city! The current light station was built from 1871 to 1874 with 1 million bricks. Also on view: The Keepers’ House with exhibits, the 1941 US Coast Guard barracks, a wooden boat building area, nature trails, a pirate ship playground, hands-on activities for all ages, a View from the Top video for those unable to climb, and a Maritime Education Center with an archaeology lab. Dark of the Moon Ghost Tours also are popular at night.

**We recommend climbing the tower if you are able. We also recommend touring the Keepers’ House, learning about the US Coast Guard barracks and WWII, and taking a peek inside the Archaeology Lab.

Founded in 1968, the Flagler College campus comprises 19 acres, the centerpiece of which is the Ponce de León Hotel, built in 1888 as a luxury hotel featuring Spanish Renaissance architecture. The architects were John Carrere and Thomas Hastings, working for Henry Morrison Flagler, the industrialist, oil magnate and railroad pioneer. 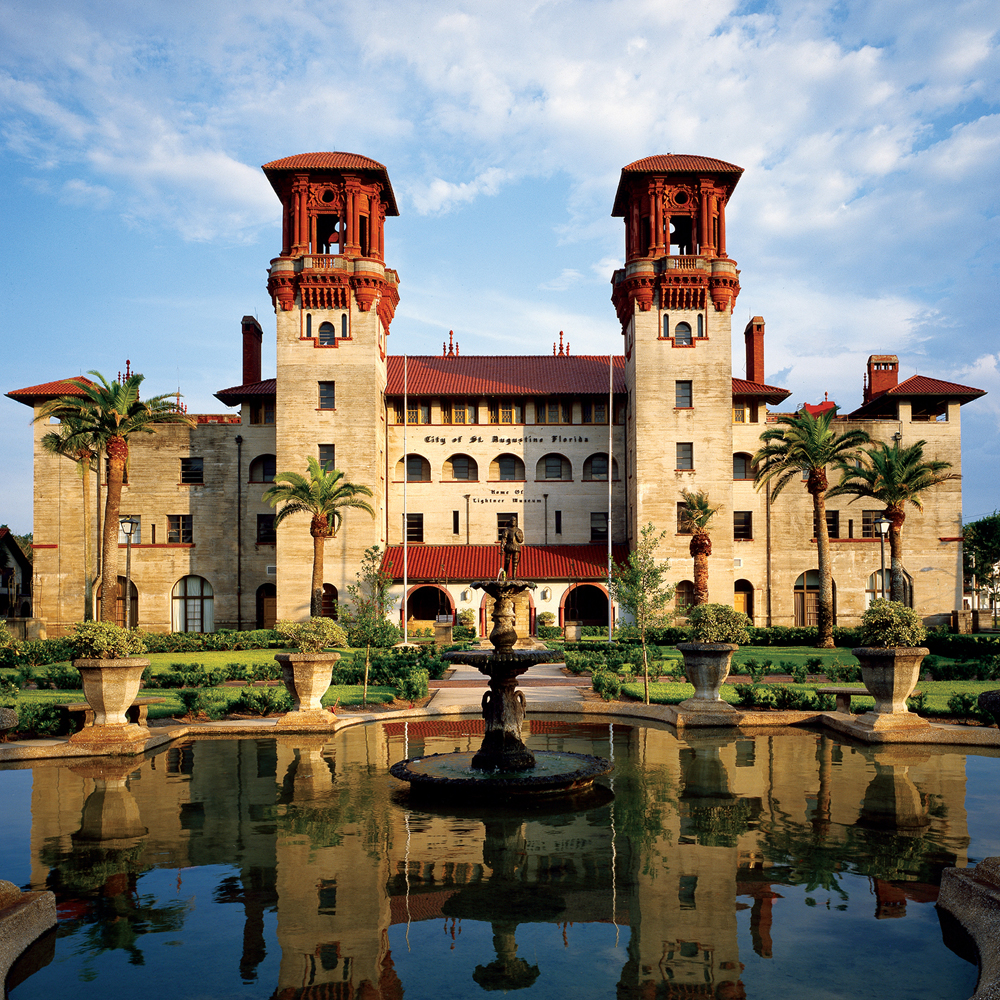 Lightner Museum is housed in the former Alcazar Hotel built in 1888 by Henry Flagler. Today it is home to one of the best collections of fine and decorative 19th century art in the country. The Museum is open to the public seven days a week and features self-guided tours, tours by reservation for adults and children, and demonstrations of antique mechanical musical instruments. The Museum is also available for weddings and events. 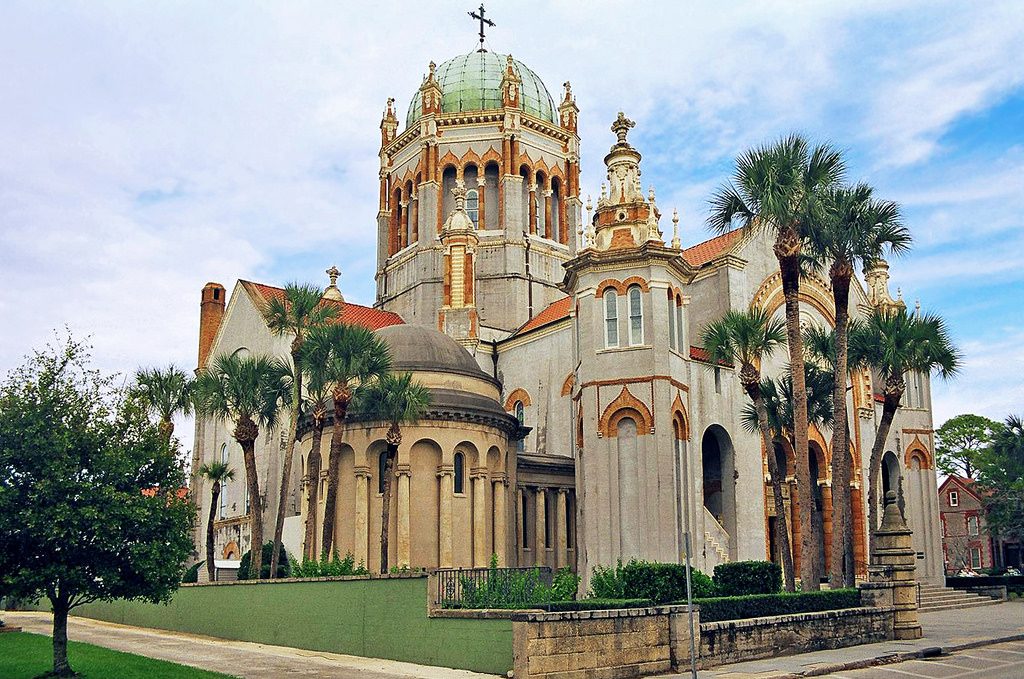 Built in 1889, Memorial Presbyterian Church stands as a memorial not only to Henry Flagler’s beloved daughter, Jennie Louise, but as a monument to Flagler’s own faith and vision. The son of a Presbyterian minister, Henry Morrison Flagler remains one of the preeminent developers of Florida. The church building was listed in “8 religious wonders to see in the U.S.” by CNN.com in 2012. Church services are held weekly throughout the year with Sunday school as well. Self-guided tours are available from 11:00 am to 4:00 pm Monday through Saturday.

**We recommend viewing the interior on a self-guided tour. Don’t miss the over five thousand pipe, Aeolian-Skinner organ. 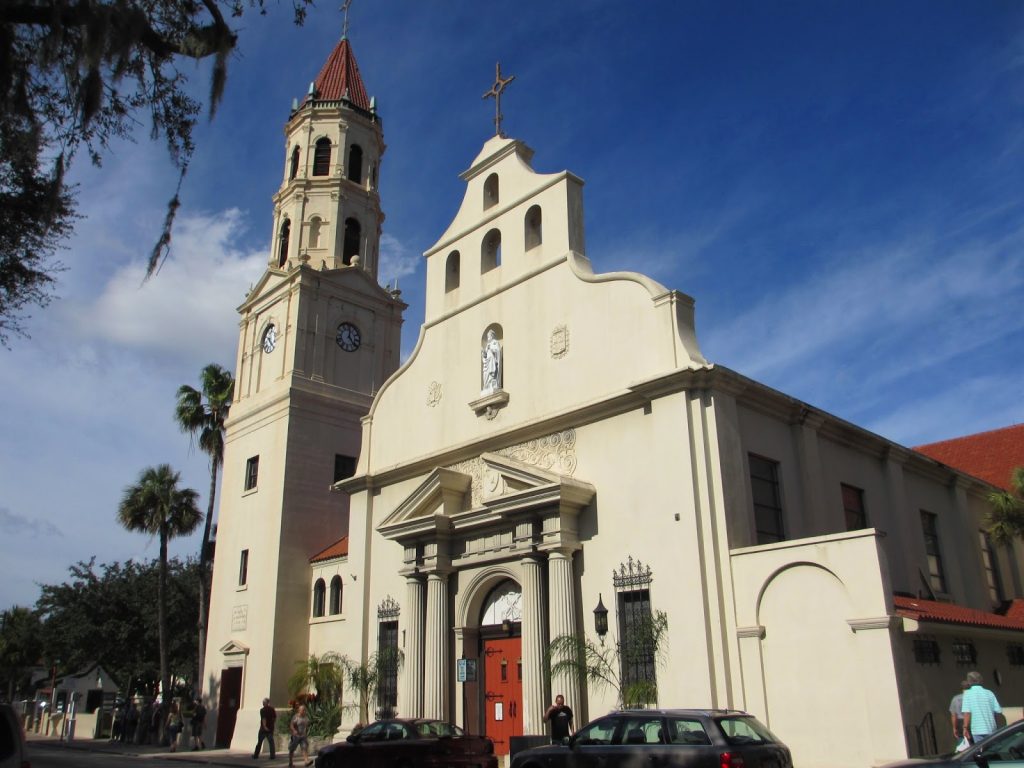 The Cathedral Basilica was built between 1793–1797. The facade is a combination of Spanish mission and Neoclassical styles. The altar was designed in Italian Renaissance by Renwick and sculptured in Carrera marble by J. Massey Rhind of  New York City. The Cathedral Basilica is the seat of the Catholic Bishop of St. Augustine. The building was designated a U.S. National Historic Landmark on April 15, 1970. Its congregation, established in 1565, is the oldest Christian congregation in the contiguous United States.

**We recommend going inside to view the altar, elaborate murals, statues, and stained glass windows. 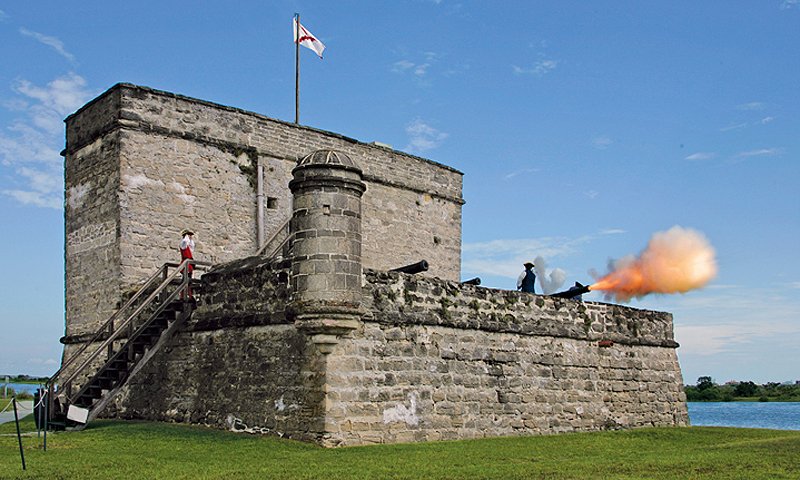 Fort Matanzas National Monument was built between 1740 and 1742, made of coquina. Located 15 miles north of St. Augustine, this fort serves as a reminder of the might of the early Spanish empire and as reflections of European conflicts as countries battled for land and power in the New World.

**We recommend taking the free boat tour over to the fort. It’s a fun adventure! 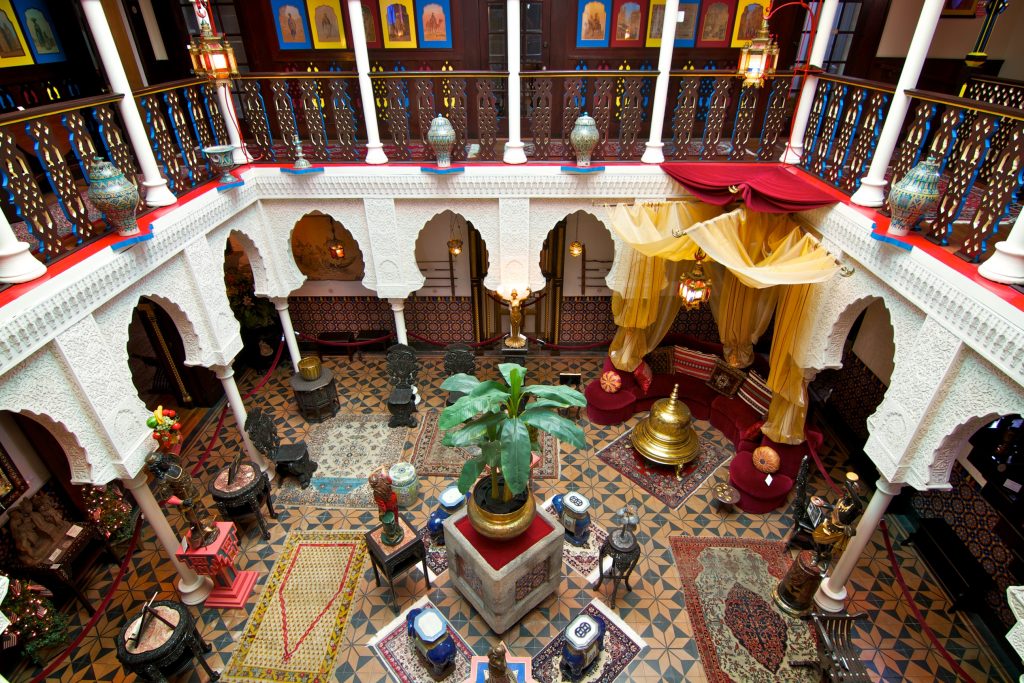 Built in 1883 by Franklin W. Smith,the Villa Zorayda is located in historic St. Augustine.  The architecture is modeled after the 13th Century Moorish Alhambra Palace in Spain. Today, the Museum houses many amazing antiquities of the previous owners’ collections. 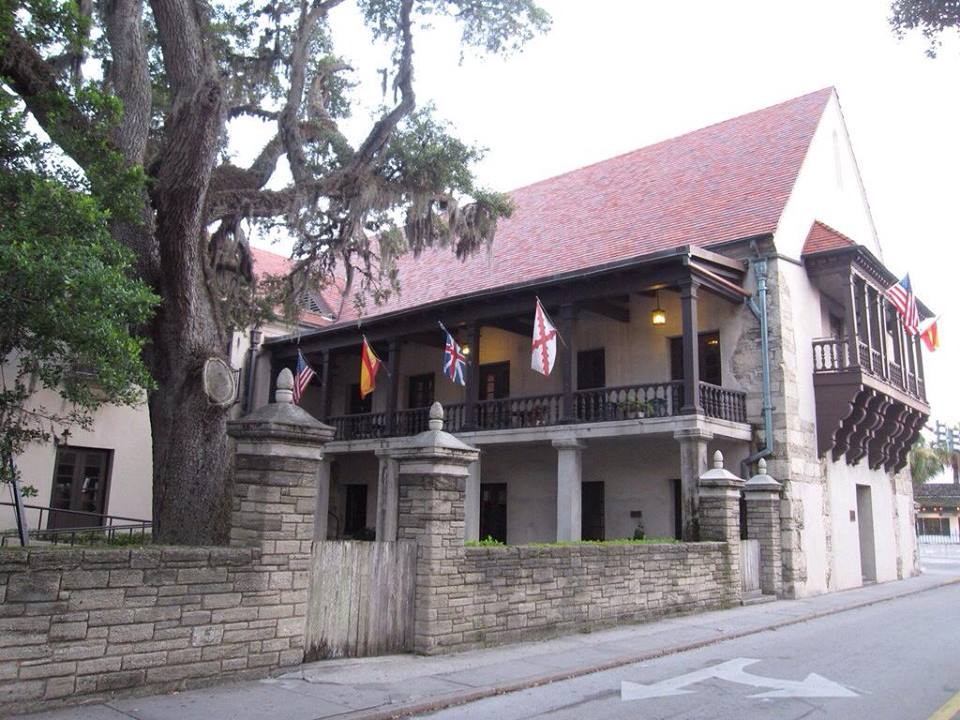 Governor’s House Cultural Center & Museum (formerly Government House) is located at 48 King Street, adjacent to the Plaza de la Constitución. The building, constructed of coquina, served as the governor’s official residence from 1710 during the First Spanish Period (1565 -1763), throughout the British Period (1763 – 1784), and until 1812 in the Second Spanish Period (1784 – 1821). The east wing of the building dates to the original construction between 1706 and 1713.

**We recommend seeing the “First Colony: Our Spanish Origins” exhibit. It’s free and open daily from 10 a.m. to 5 p.m. 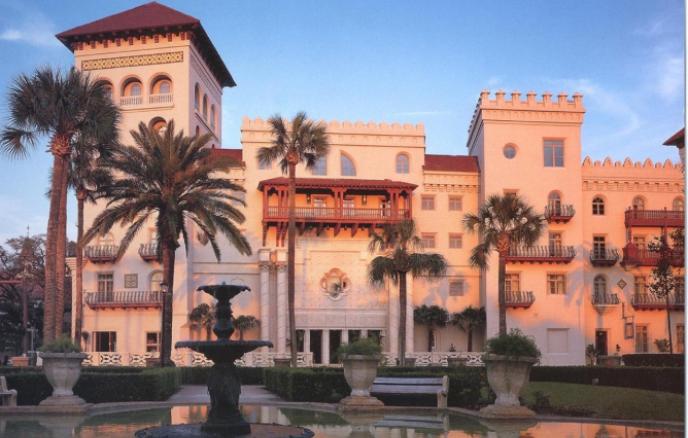 The Casa Monica Hotel was built in 1888 by the architect Franklin W. Smith. Four months later, Henry Flagler purchased it and changed the name to Cordova. The Moorish Revival-style is consistent throughout, with intricate balconies, red tiled roof, gold leafed archways, rich Spanish tapestries, and wrought iron four poster beds, and mahogany furniture in the bedrooms.

**We recommend having a cocktail, glass of wine or beer in the Cobalt Lounge. 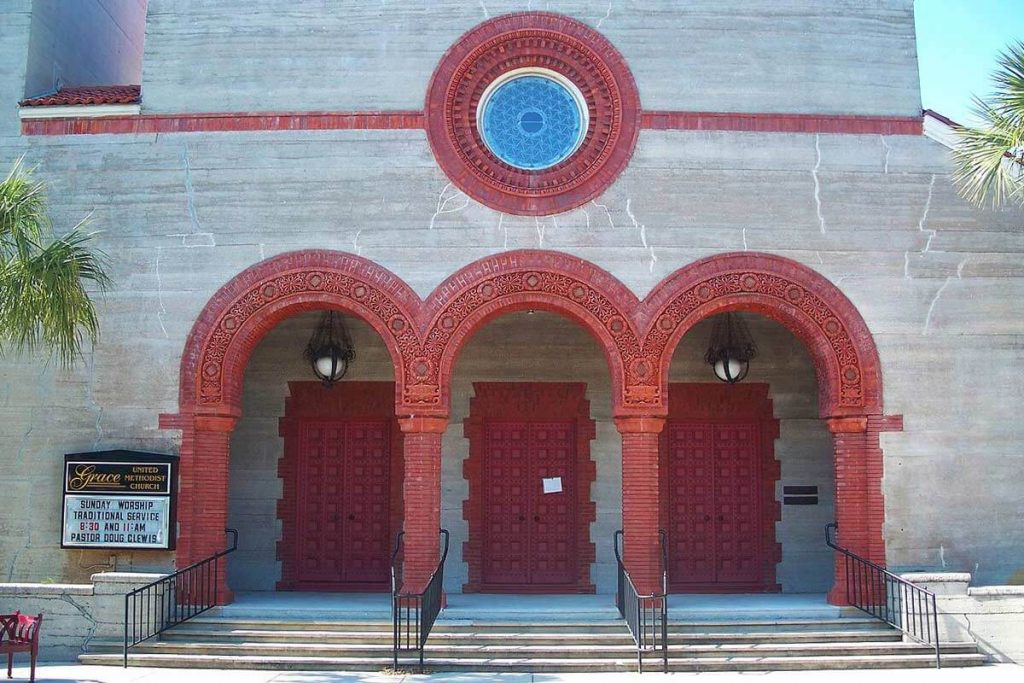 Grace United Methodist Church, 8 Carrera St., is a historic church which Henry Flagler had built from 1886 to 1887 in St. Augustine, Florida. Added to the U.S. National Register of Historic Places in 1979, the building was designed the Spanish Renaissance style by John Carrere and Thomas Hastings.

**We recommend taking up-close photos of the archway, doors, and windows. 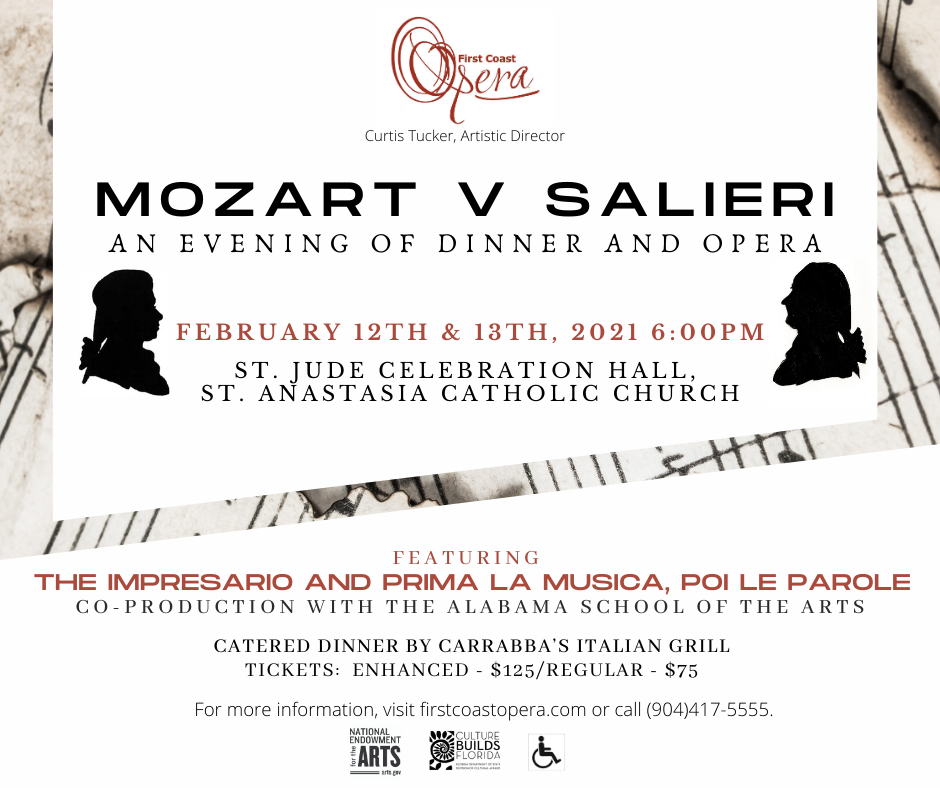