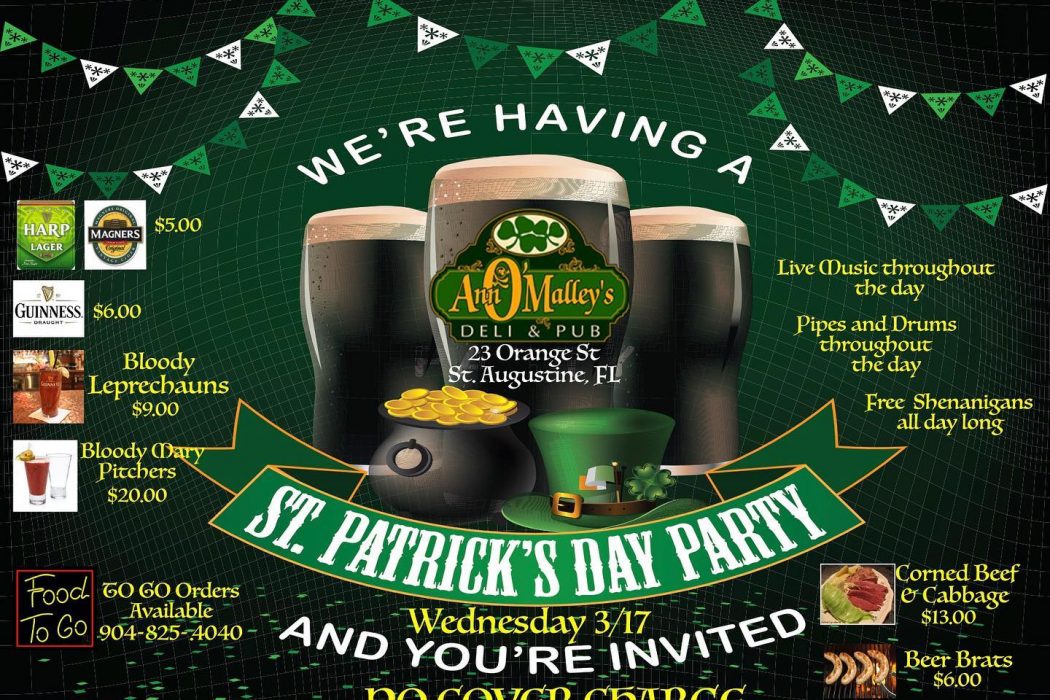 By Renee Unsworth, first published in February 2018
Put another feather — or shamrock — in St. Augustine’s cap.
It’s time to re-write history. It’s been proven in written records that the first event commemorating Saint Patrick in the U.S. was held in St. Augustine, Florida in 1600, and the first St. Patrick’s parade/procession took place in 1601.
This pre-dates Boston’s claim to the first St. Patrick’s Day celebration in 1737 (stpatricksday.com), and New York City’s first St. Patrick’s Day parade in 1762 (history.com).
Found in Spanish archives on December 20, 2017 by historian Dr. J. Michael Francis, documents reveal that spring festivities included a feast day of San Patricio (St. Patrick) in the year 1600 in St. Augustine, Florida. The discovery was found in a gunpowder expenditures log in Spain’s Archivo General de Indias, or AGI.
“While artillery pieces often were fired to help guide ships safely across St. Augustine’s protective sandbar, they were also fired during times of public celebrations and religious festivals,” Francis wrote in his blog for PBS,  www.pbs.org/wnet/secrets/blog/uncovering-secrets-spanish-florida/
Francis is a professor and Chair of the Department of History and Politics at University of South Florida, St. Petersburg. He was recently appointed to the Florida Historical Commission. He’s been searching through those Spanish archives, off and on, for the past 30 years.
Also in Francis’ PBS blog: “In March of 1601, St. Augustine’s residents gathered together and processed through the city’s streets in honor of an Irish saint, who appears to have assumed a privileged place in the Spanish garrison town. Indeed, during these same years, St. Patrick was identified as the official ‘protector’ of the city’s maize fields.”
How did Francis feel when we figured out what he had just found?
“It was certainly a surprise … it did not register the first time I looked through it. … It was written in Spanish, and it took a few seconds before it actually hit me that this was a St. Patrick’s Day parade/procession,” Francis explained when he discovered these facts.
” … I don’t know how much it will change the national perception (of St. Patrick’s Day) which has evolved into something so unique. … It certainly forces people to pause.”
Carl Halbirt, recently retired City of St. Augustine archaeologist, is thrilled with this discovery. Halbirt was recently named Parade Marshal of the 2018 St. Augustine St. Patrick’s Day Parade taking place on March 10.
“The history of St. Augustine, its diversity, and place in American (U.S.) heritage is often overlooked by people who do not live in Northeast Florida,” Halbert said.
“Yet, it is a city of firsts and oldest in terms of the country’s European ancestry. The discovery of this particular cultural tradition only adds to the city’s mystic and place. The late historian Luis Arana stated that ‘we have only scratched the tip of the iceberg’ regarding the historical records (and I might add the city’s buried archaeological record).  Dr. Michael Francis’s discovery of these documents adds to St. Augustine’s cultural heritage.”
RARE FINDS
For Francis, this is one of two extremely rare finds. His previous discovery was the oldest documented marriage in St. Augustine in 1565, which was between a free black woman and a Spanish soldier.
“I’ve been working in those Spanish archives going on almost 30 years … and it’s rare that you read through and there’s this one magical document that changes everything … like this one St. Patrick’s day commemoration,” Francis said.
According to catholic.org, Saint Patrick is thought to have been born in the late fourth century, and is known for driving the snakes from Ireland (probably an analogy of putting an end to pagan practices). Saint Patrick wasn’t the first to bring Christianity to Ireland, but it is believed he encountered the Druids and abolished their pagan rites. He died in March 17, 460 A.D.
IRISH-AMERICAN RESIDENTS
Francis also found written archive records about two Irish residents in St. Augustine — David Glavid, a soldier and a merchant who moved to St. Augustine in June 1597, and Ricardo Artur (Richard Arthur) who served as St. Augustine’s parish priest from 1597 to 1604, when he disappears from the record.
Francis believes the St. Patrick celebrations in 1600 and 1601 were influenced by the Irish priest, Richard Arthur.
eventfloridafoodfoodieIrishIrish-Americanlive musicmusicSt. AugustineSt. Paddy's DaySt. Patrick's Daythings to do

Food trucks are all the rage in recent years … and the St. Augustine area has a fair share of them offering a wide variety of…