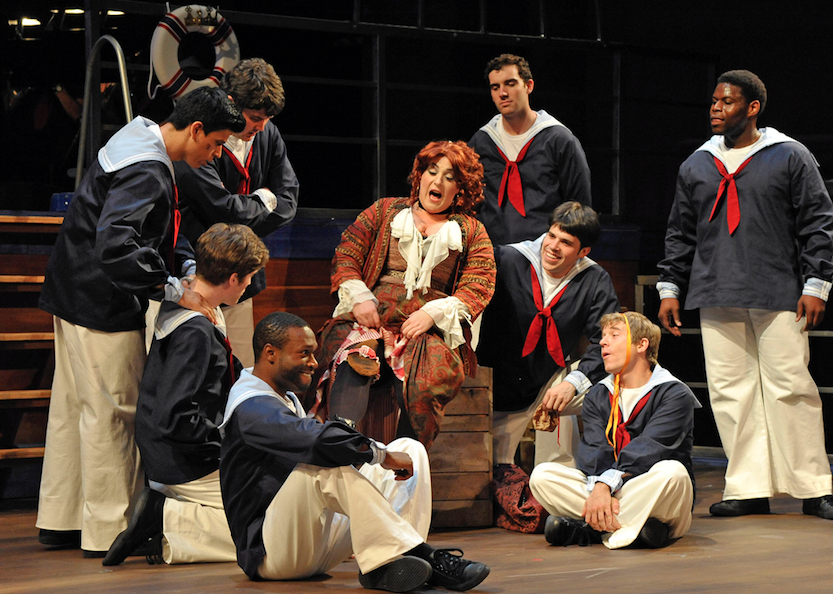 Adam Benton (Bob Becket) is a native Floridian, born and raised in Jacksonville, and currently a Junior at Stetson University, where he is studying Vocal Performance.  He has sung in Carmen , Ravel’s L’enfant et les sortilèges , and Handel’s Giulio Cesare .  He has been soloist in Handel’s Messiah and Britten’s Rejoice in the Lamb. Upcoming projects include roles in The Magic Flute and The Barber of Seville .
Nicholas DeMeo (Ralph Rackstraw) is excited to be making this role debut with First Coast Opera. A native of Ormond Beach, FL, he made his professional debut as Pang in Turandot with Shreveport Opera in 2014. He has since been seen as Borsa in Rigoletto with Opera in the Heights, Gastone in La Traviata , and St. Brioche in The Merry Widow both with Pensacola Opera, and Alfred in Die Fledermaus with Fargo-Moorhead Opera. Nicholas has also been an apprentice at Fargo-Moorhead, Pensacola, Central City, Caramoor, Brevard Music Center, and Seagle Music Colony.  He holds degrees from The University of Houston and Stetson University.
Brittany Fouché (Josephine) last appeared with FCO as Mr. Swine and Little Red Riding Hood in The Trial of B. B. Wolf .  A former Encouragement Award winner from the Metropolitan Opera National Council Auditions, she has sung with Des Moines Metro Opera, Opera Saratoga, and St. Petersburg Opera, as well as in concert with Kristin Chenoweth, the Cummer Family Foundation, the San Marco Chamber Music Society, and the Jacksonville Symphony.  The Florida native received degrees in voice and opera from the University of North Florida and the University of British Columbia.. In 2017, Brittany joined the voice faculty at UNF’s School of Music, and she will sing in Orff’s Carmina Burana with UNF in April 2020.
Patrick Jacobs (Captain Corcoran) is an established veteran of hundreds of performances in opera and musical theater throughout the United States.  He has been featured at Carnegie’s Weill Hall, New Orleans Opera, Charlottesville Opera, Mobile Opera, GLOW Lyric Theatre, Pensacola Opera, and many others.  First Coast Opera audiences will remember him as Baron Gondremarck in La Vie Parisienne .  Dr. Jacobs is Director of Vocal Studies and Opera at the University of Mobile.
Sarah Nordin (Little Buttercup) previously appeared with FCO on Bernstein’s Broadway and Opera’s Most Haunting Melodies concerts.  Her signature roles include Rosina in The Barber of Seville , Dorabella in Cosi fan tutte and Orlofsky in Die Fledermaus. Upcoming engagements include Maddelena in Rigoletto with St Petersburg Opera and Gulf Coast Symphony, Edith in The Pirates of Penzance with Opera Tampa and Angelina in La Cenerentola with Geneva Light Opera.  Ms. Nordin has performed with several prestigious companies, including six productions with The Metropolitan Opera including three Met Live in HD Broadcasts and their Japan tour.
Tyler Putnam (Dick Deadeye) is pleased to return to First Coast Opera after appearing in last season’s Bernstein’s Broadway .  His 2020 engagements include The Pirate King in The Pirates of Penzance for Opera Tampa, Ashby in La fanciulla del West for Opera Orlando, Colline in La bohème for Lakeland Opera, and Banquo in Lady M, Heartbeat Opera’s new adaptation of Verdi’s Macbeth .  Originally from Chebeague Island, Maine, Mr. Putnam attended Dartmouth College.
Curtis Tucker (Sir Joseph Porter) joined FCO as Artistic Director in 2014.  He first encountered Gilbert and Sullivan operettas as a singer for the College Light Opera Company on Cape Cod in 1988 and was instantly a big fan.  Next month, he conducts The Mikado for the University of North Florida Opera Theatre, and in May he premieres his third one-act opera, Penelope Ann’s Revenge , as a sequel to Sullivan’s Cox and Box .  This Spring, Curt will conduct The Little Prince for FCO and continue teaching at the Florida School of the Arts in Palatka.
Dawn Veree (Cousin Hebe) is a relative newcomer to Florida and sang in FCO’s The Marriage of Figaro chorus last season.  Locally she has appeared with ABET (Old Lady/Hooker in Violet ), Players by the Sea (Madelaine True in Wild Party ) and Flagler Playhouse (Masha in Vanya and Sonia and Masha and Spike ).  Prior to moving to the beach, her favorite roles ranged from Louise in Always, Patsy Cline , to Mabel in The Pirates of Penzance and The Witch in Into the Woods .  She has sung aboard the MS Royal Odyssey and for many seasons with the San Diego and Utah Opera choruses.
Jason Whitfield (Bill Bobstay) makes his First Coast Opera debut having just moved from New York with his wife and 3 sons. Jason has a Graduate degree from the University of Tennessee. He still performs with the New York Gilbert and Sullivan Players (NYGASP) and most recently was seen on the CW Christmas Carolers Challenge with Songful Artists. Jason has entertained audiences all over the world with Celebrity Cruises, Disney World, Tokyo Disneyland, Lee Greenwood, and many Regional Theaters. He continues to sing with the all-male group FIGARO and croons with the all-female group The Manhattan Dolls. Jason would like to thank Christina and his boys Dawson, Dylan, and Dakota for their support.

Zeek Smith (Conductor) is Director of Music at San Jose Episcopal Church in Jacksonville, Founder of the Jacksonville Chamber Music Collective, and serves on the Executive Board of the Jacksonville Chapter of the American Guild of Organists.  For FCO, he served as Music Director and Pianist for last Spring’s The Trial of B. B. Wolf . Born and raised in Northeast Florida, he studied at Jacksonville University before earning his Master of Music degree at Ithaca College in New York.  There, he also held positions with The Hangar Theatre and Opera Ithaca. Most recently, he was Music Director and Pianist for Mamma Mia! at Cape Fear Regional Theatre and keyboardist for the Wicked National Tour.
Nelson Sheeley (Stage Director) has worked in professional theatre and opera since 1970 acting, directing, stage managing, and for ten years serving as Managing Director of Allenberry Playhouse, where he directed over 90 productions of plays, musicals and operettas. He directed FCO productions of La Vie Parisienne , Two Trials , and The Marriage of Figaro , as well as productions for Opera Saratoga, The Liederkranz Society, The National Opera Company, Whitewater and Sorg Operas, Opera Naples, Nevada Opera, and the Orchestra of St. Luke’s. A graduate of the Yale School of Drama, he currently is an adjunct professor of theatre at Sinclair Community College in Dayton, Ohio.
Pigman’s Music & Arts Company (Scenic Artists) is owned by locals Stephen Pigman and Jessica Anderson. They are happy to be back for their second production with First Coast Opera after both creating the set and stage-managing for Pasta & Puccini in October. Formerly resident artists at Flagler Playhouse, they have recently opened a workshop here in St. Augustine for upcoming public art, museum exhibit, and set building projects! www.stephenpigman.com
Alan Michael Smith (Costume Designer) has worked as a freelance Costume Designer on Broadway and for various regional theaters in and around New York. As a member of the Theatrical Wardrobe Union, Alan has been associated with over 15 Broadway shows in the last 25 years. He had the pleasure of being the Resident Costume Designer for eight years at Opera Saratoga during Curtis Tucker’s tenure there. Currently he is the Resident Costume Designer at Wagner College.  Previously, Alan designed La Vie Parisienne, Madama Butterfly , and The Marriage of Figaro for FCO.
Nicole Dupré (Hair and Makeup Designer) has worked alongside and within numerous Performing Arts institutions, including The Orlando Ballet, The Orlando Philharmonic, Stetson University, UCF, First Coast Opera, and Vero Beach Opera Company, among others.  Her highly regarded expertise in skincare has earned the trust of such notable clientele including Andrea Bocelli, Celebrity Chefs, FORBES Magazine, The Today Show, MSNBC, The Golf Channel, WESH 2 News, and even a 500lb tiger.

May 6-May 14: Pie in the Sky For the Birds Fundraiser Finale — feeding low income seniors

Pie in the Sky Community Alliance, a local non-profit that delivers fresh produce to the homes of 500 low-income seniors throughout St. Johns County,…