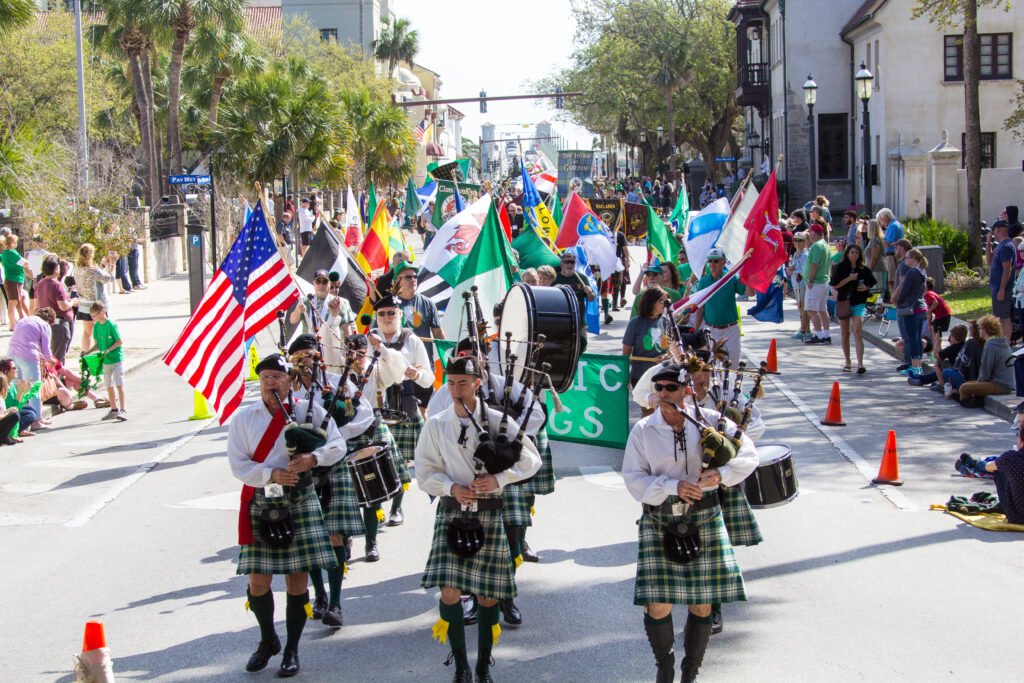 The St. Patrick Parade, produced by Romanza-St. Augustine, Inc., returns on Saturday, March 12 at 10 am starting at Francis Field and follows a three-mile route through historic downtown and culminates at the Celtic Music & Heritage Festival on Francis Field, 25 West Castillo Drive in St. Augustine, Fla. The Celtic Festival is a two-day celebration of St. Augustine’s Celtic history. For more information, visit www.celticstaugustine.com

The 2022 Parade Grand Marshal will be The Sisters of St. Joseph representing the Miguel O’Reilly House which has been in the care and ownership of the Sisters since 1866.

The unique history of the house, built in 1691, and its tradition is an important part of the history of St. Augustine. Father O’Reilly, another Irish priest, was vicar from 1785 to 1812 to the Spanish colonists in St. Augustine, which was Spain’s capital in La Florida. The Sisters opened The O’Reilly House, known officially known as the Father Miguel O’Reilly House Museum as a museum and fundraising site at 32 Aviles Street. On October 15, 1974, the House was added to the U.S. National Register of Historic Places.

The parade reviewing sStand will be located and hosted by Ann O’Malley’s Irish Pub at 23 Orange Street in St. Augustine. The Parade announcer will be Jessica Clark, award-winning journalist and First Coast News, WTLV-TV news anchor, who has covered St. Augustine and St. Johns County since 2005.

This year’s Parade judges include Sheldon Gardner, a St. Augustine Record reporter, who has resided locally since 2014 and enjoys the sound of bagpipes and the historic attributes of the Nation’s Oldest City. Amy Hendrickson will also serve as a judge. She is an award-winning acoustic solo songwriter and vocalist with more than 20 years of entertainment experience, and a creative and versatile professional who has toured regionally and nationally.

Additional judges include Michael Sullivan, a 45-year veteran of the Detroit Irish music scene, and member of the Detroit Gaelic League and Irish American Club, and the Fraternal Order of United Irishmen, and he winters in St. Augustine, and Renee Unsworth, founder of TotallyStAugustine.com, who produces a local website promoting events. She is also a photographer and social media manager and has vast knowledge of the arts and entertainment in Northeast Florida. Also, serving as a judge is Jeff Valin, an accomplished, award-winning First Coast News anchor and reporter.

On Saturday, March 12 from 8 am until 11 pm, free shuttle transportation and parking for the Parade and the Celtic Festival will be available. For shuttle locations and parking, visit the website at www.celticstaugustine.com/directions

For more information about the Parade festivities and route, visit www.celticstaugustine.com/parade

The St. Augustine Celtic Music & Heritage Festival was first produced in 2011 and has grown in popularity each year while winning multiple awards for…