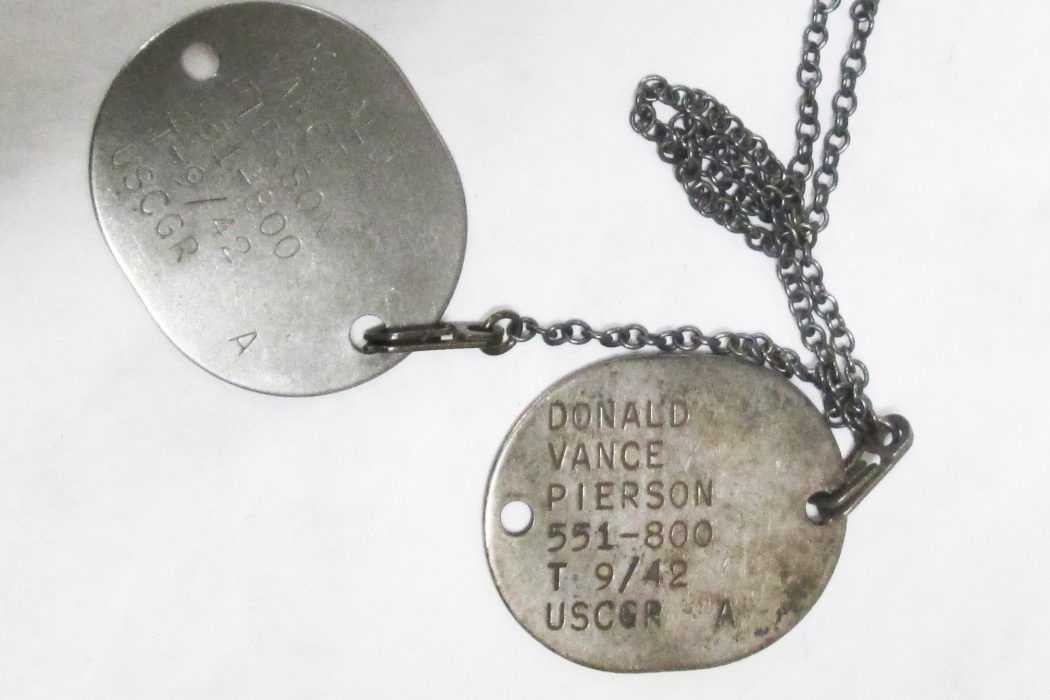 The St. Augustine Lighthouse & Maritime Museum is excited to announce an upcoming World War II exhibit, “Guardians of the First Coast: A World-Wide Story Told through Local Eyes,” set to open in spring 2020.

Over the next several months, Museum staff and designers (contracted in a public bid process) will design, fabricate and install unique local stories that will utilize a portion of 2,000 artifacts and oral histories collected over years from US Coast Guard and US Navy Veterans who trained in St. Augustine during the war years for service around the world. 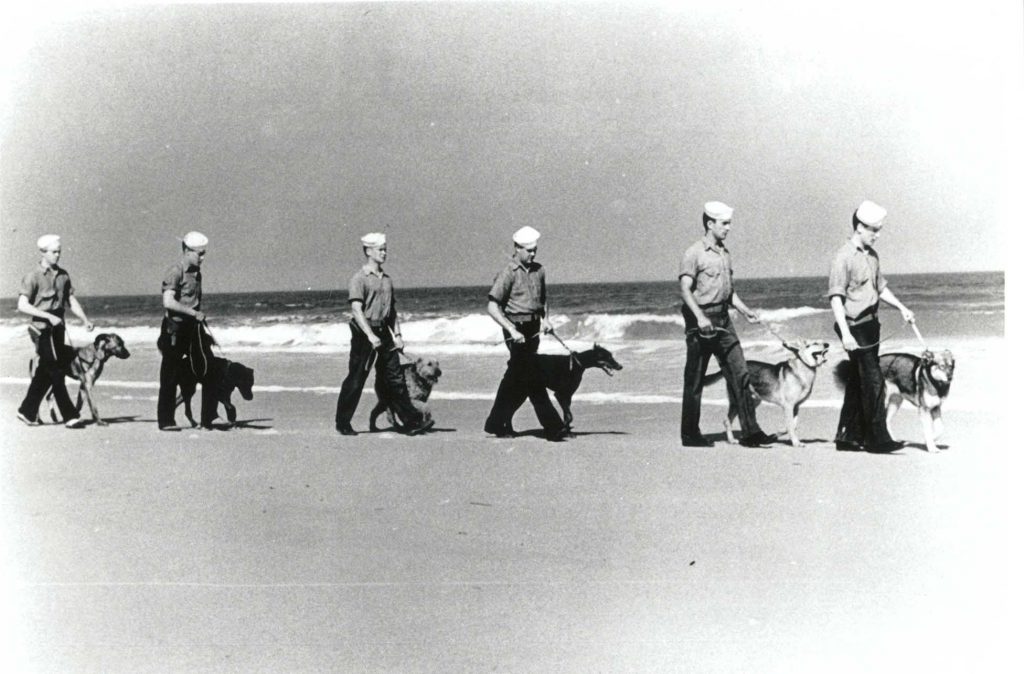 U.S. Coast Guard dog handlers patrol the shoreline during WWII. This photo was taken by photographer Buddy Wilson sometime between 1943-46 on Anastasia Island or Vilano Beach.

“These precious artifacts are treasures that tell a story of dedication and sacrifice,” said CAPT Bob Buehn, US Navy Retired, Chairperson of the St. Augustine Lighthouse & Maritime Museum Board of Trustees.

“We are proud to bring this story to the public, and we want to thank the community donors who have made this happen.”

The exhibit will be housed in the 1941 Coastal Lookout Quarters located on the grounds of the historic St. Augustine Light Station. The Lookout building was restored in 2018 with the help of Architect Kenneth Smith of Jacksonville.

The WWII local story will spill over onto the grounds and into a 1936 Garage used during the war years for the Navy Beach Patrol. The Beach Patrol used dogs, Jeeps, and horse to watch miles of local coastline for landing sites by saboteurs and spies as well as the presence of German U-Boats.

The exhibit is slated to open in May 2020 and is sponsored in part by the Florida Department of State, Division of Historical Resources and the St. Johns County Tourism Development Council.

“We have some powerful oral histories that tell of local first-hand experiences” said Kathy Fleming, the Museum’s Executive Director.

The new exhibit will showcase firsthand stories, letters, photographs and objects from the people who lived in the area during World War II and will highlight the role of St. Augustine and northeast Florida in the global conflict. Some delicate objects will require protection in special casework and some items too fragile to be displayed may need to be digitized for sharing. 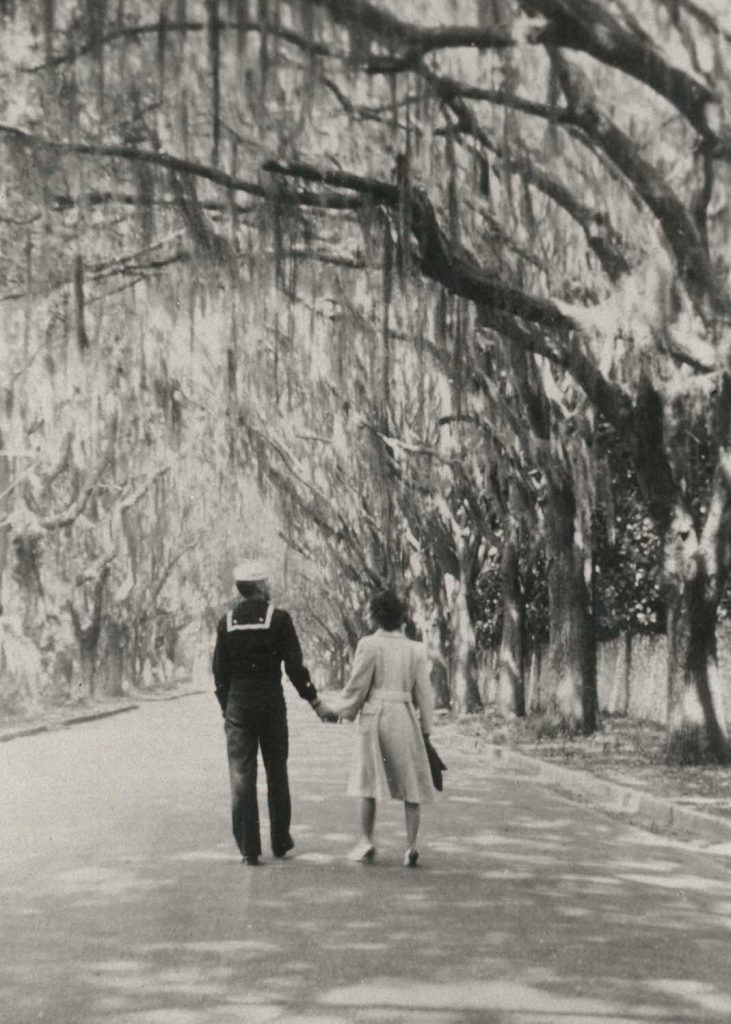 Edward Bean and his wife, Margaret, walk down Magnolia Avenue in 1943. This photo was taken on a Sunday morning by a friend when Margaret was visiting Mr. Bean on a weekend. They were married at the Ponce Hotel on July 20, 1943 at 8 PM, and reported for duty in St. Augustine the next day at 8 AM.

The Light Station was a defensive post in WWII, and half the site is restored to that era. Guests can visit the WWII U.S. Coast Guard Coastal Lookout Quarters, where Coasties lived and stood watch atop the tower, marking each ship’s location as it passed and radioing coordinates into headquarters at Government House on the Plaza.

After German U-boat 123 sank an oil tanker just off Ponte Vedra Beach in March 1942, the Anastasia Island lighthouse was reduced in candle power and coastal residents lived in blackout conditions.

The United States Coast Guard was placed under the Department of the US Navy for wartime, and Coasties and SPARS trained in St. Augustine for service around the world. Notable members stationed here included Jacob Lawrence, the first African American artist to be featured in the Museum of Modern Art. He was a waiter at the USCG training center at the Ponce De Leon Hotel. (Please see the attached timeline and photos for more information.)

Guinness World Records Â® has confirmed that Ripley’s Believe It Or Not! St. Augustine Odditorium and Ripley’s Red Trains have set a new…