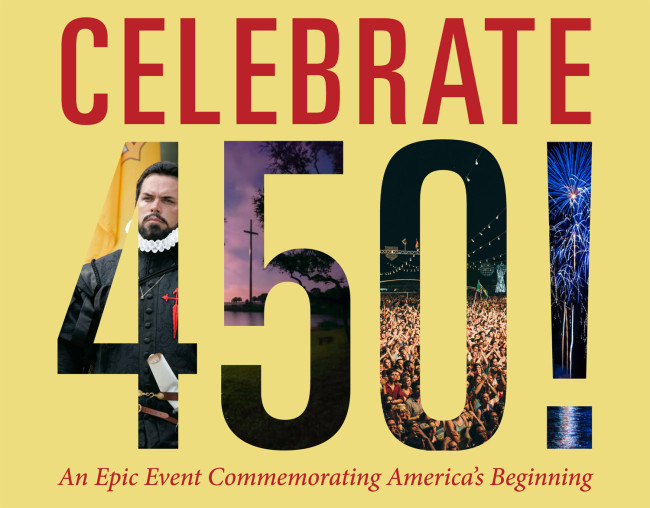 From the City of St. Augustine

The City of St. Augustine today announced that the St. Johns County Cultural Events Division, a 450th Commemoration Alliance Partner and operator of the St. Augustine Amphitheatre and the Ponte Vedra Concert Hall, will secure entertainment and provide logistical support for the street and musical festival portion of Celebrate 450!

Celebrate 450! is a free, five-day celebration of the 450th anniversary of the founding of St. Augustine produced by the City of St. Augustine and the culminating event of St. Augustineâ€™s 450th Commemoration, a series of programs, festivals and exhibitions which, over the past four years and under the direction of Dana Ste. Claire, has shared with the nation and the world the important role St. Augustine played in the making of America since its founding on September 8, 1565.

Celebrate 450! is scheduled for Friday through Tuesday, September 4-8, and includes a number of programs throughout the city including reenactments, processions, a commemorative Mass, and cutting and serving of the anniversary birthday cake. The five-day event kicks off with three days of music on multiple stages scattered through the cityâ€™s downtown historic district. It is this portion of Celebrate 450! where the Cultural Events Divisionâ€™s assistance is centered.

â€œAnyone who has been to a show at the St. Augustine Amphitheatre is familiar with the level of professionalism its team exhibits at every event and the understanding of every facet of entertainment management.â€

â€œOne lasting result of the Mumford and Sons concert in September 2013, is the strong working relationship between the city and the Cultural Events Division,â€ said Lueders.

â€œWe are completely confident that General Manager Ryan Murphy and his team will bring both their subject matter expertise to the event as well as their strong commitment to their community.â€

â€œEveryone in the Cultural Events Division is excited about bringing our skills and know-how to help set the stage for a great community event,â€ said Murphy.

â€œSince planning for the 450th began, we have wanted to participate in a big way, and now we have the opportunity to do what we know best. We are very excited about providing the same level of service and showmanship to Celebrate 450! we deliver at the St. Augustine Amphitheatre and the Ponte Vedra Concert Hall.â€

Most stages will be located in a pedestrian-only area bounded by Orange Street, Cordova Street, Cathedral Place, and Avenida Menendez.

The main stage will be located at Ponce Circle, just east of the Plaza de la ConstituciÃ³n and will feature a large audience area where alcohol purchases and consumption will be permitted. Other venues include AvilÃ©s St., Hypolita St., the Colonial Quarter and the Plazaâ€™s Gazebo. All of the entertainment portions of Celebrate 450! are FREE.

The pedestrian-only area will be in place each night from 6 p.m. until approximately 11 p.m. based on safety assessment by the St. Augustine Police Department.

SCHEDULE FROM www.StAugustine-450.com/Celebrate450.
Friday, Sept. 4, 2015 from 3 to 10 p.m.
Music & Street Festival*
The festival includes music and historical and cultural performances on multiple downtown stages, including a main stage on the bayfront.

Saturday, Sept. 5, 2015 from 11 a.m. to 11 p.m.
Music & Street Festival*
The festival continues with music and historical and cultural performances on multiple downtown stages, including a main stage on the bayfront.

Fireworks Show*
This will be a spectacular fireworks show over the Matanzas River.

Sunday, Sept. 6, 2015 from 11 a.m. to 2 p.m.
Music & Street Festival*
The festival continues with regional and local music and historical and cultural performances on multiple downtown stages.

Monday, Sept. 7, 2015
Cake Cutting & Proclamation Reading*
A cake cutting, local music and reading of a proclamation will take place on this day in the Gazebo in the Plaza de la ConstituciÃ³n.