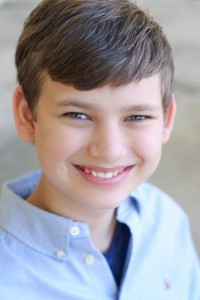 Will Gooden (Photo by Madi Mack)

Will Gooden began his theatre career in Kidzfactory; was recently  in three main stage shows

St. Augustine, FL – Local actor Will Gooden, age 12, was recently seen on the Matuza Main Stage of Limelight Theatre in Oliver! (an orphan), The Addams Family (Pugsley understudy), and in the ensemble of Miracle on 34th Street The Musical.

In March, he decided to step out of his community theatre and audition for a role at Alhambra Theatre & Dining, a professional dinner theatre in Jacksonville.

Will was cast as Billy Ray, Jr., the grandson in On Golden Pond. He is working beside Mike Farrell, who is best known as Captain B.J. Hunnicutt from the hit T.V. show M.A.S.H.

“He’s a great actor and I’m learning a lot from him and the professional cast and crew,” Gooden said on April 1, opening day of the four-week run.

On Golden Pond is staged April 1 through May 3 at Alhambra,Â 12000 Beach Blvd., Jacksonville. Go to www.alhambrajax.com for more details.

Gooden began acting in Limelight’s education program, KidzfACTory, in 2008 at age 7. His first play was Peter Pan, and he recently completed a studio theatre performance of Aesop’s Fables.

“I’ve enjoyed having Will in our education programming at Limelight,” said Courtney Helen Grile, the Director of Education and Community Engagement at Limelight Theatre.

“He is a delight because he is a hard worker and brings a great deal of sincerity and honesty to his scene work/performances.”

What does Will enjoy about theatre?

“The audience’s reactions and playing different people,” he said.

How has his Alhambra experience differed from community theatre acting?

“The pace is much quicker,” Will explained. “Rehearsals are done in less than two weeks.”

Will is a seventh grade student at Pacetti Bay Middle School, where he plays the trumpet in the PBMS Band.

“He is in theatre because he loves it,” his mom Mindy explained. “He has such a great time in each and every show.”

St. Augustine is the South’s No. 1 Best Food Town in 2019 by Southern Living Magazine!