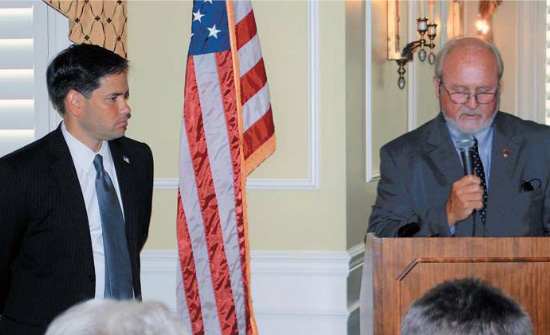 I normally do not cover politics in my role as a community columnist. I think I touched on the subject one time so far and that was after an election had concluded. But I was most impressed earlier this week when one of Floridaâ€™s U.S. senators announced his candidacy for our nationâ€™s presidency.

Thereâ€™s even somewhat of a local angle for this column since, while working for another publication, I covered Marco Rubioâ€™s visit to St. Augustine in the spring 2011.

Thereâ€™s also another personal connection, which puts me on a spectrum somewhere between prophetic political pundit and lucky guesser.
First, to the latter. It was early 2010 and I was having lunch with my co-workers at the Florida Farm Bureau cafeteria in Gainesville.

As often happens, the subject turned to politics. Floridaâ€™s then Gov. Charlie Crist had recently announced that he was giving up his job as governor to pursue a vacant U.S. Senate seat.

Former Florida Speaker Marco Rubio was also seeking the Republican nomination and was trailing badly in the polls to Crist.

One of my colleagues was assessing how Crist would do in the general election when I suggested he might not even get the Republican nomination. This made my colleague gag and say something akin to, â€œwhen pigs fly.â€ About six months later, Porky had taken flight.

Fast forward to April 2011 when newly elected Sen. Marco Rubio was in the midst of a series of town hall meetings, one of which was scheduled for St. Augustine. The meeting was to take place at the Council on Agingâ€™s River House and even I was surprised to see the standing-room-only crowd that had gathered.

The 2012 presidential election was taking shape at the time and Rubioâ€™s name was being thrown around as a potential vice-presidential running mate for whomever the Republicans nominated.

The lead in the story I wrote about his appearance noted that just about the only thing Rubio said that disappointed the crowd was that he wasnâ€™t seeking to be on the presidential ticket in 2012.

If you listened to what Rubio said when he declared for president on April 13, 2015, it wasnâ€™t too different than what he told his St. Augustine audience four years earlier.

Back then Rubio said, â€œFor the last 100 years Americans have been an inspiration to the rest of the world.â€ He then added, â€œExceptionalism comes with a price. Thereâ€™s nothing wrong with our people but thereâ€™s a lot wrong with our government.â€

His 2011 remarks also covered some of his thoughts on taxes. He said, â€œWe should be cautious when political leaders believe you have earned enough money. I think the role of government is to make it easier for you to succeed, not get in your way.â€

The 2016 presidential election is still a long way off but I think Rubio has as good a chance as any to get the Republican nomination and, at age 44, become the third youngest U.S. president in history.
Iâ€™m old enough to remember folks saying that John F. Kennedy was too young to be president and, for that matter, Ronald Reagan was too old. We all know where those thoughts led.

I closed my story about Rubioâ€™s 2011 visit to St. Augustine with a quote relating to the problems America was facing and how it made him feel.

Rubio said, â€œI would still rather be us than anyone else. I pray and hope that I will be able to be part of the solution.â€

Be on the lookout for flying pigs because, four years later, Rubio might just get his chance.

We are forever changed! #stastrong

As residents of St. Augustine and St. Johns County, we are FOREVER CHANGED by Hurricane Matthew. As we repair and rebuild, it’s the PEOPLE…