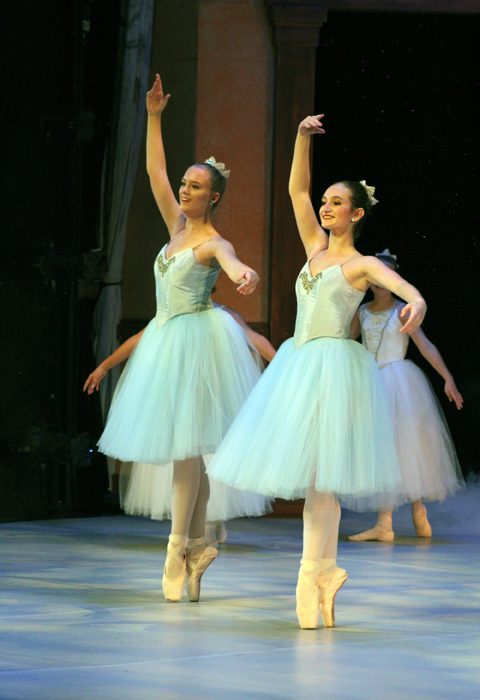 When George W. Bush was getting ready to begin his second term as president, my wife and I took our daughter, Jenny, to Jacksonville to see her first live production of The Nutcracker. She caught the bug and family attendance at the show became an annual tradition.

A year or two later, during the Mikhail Baryshnikov – Gelsey Kirkland version of the Nutcracker broadcast on PBS, Jenny grabbed a rag doll and began dancing around the living room to Tchaikovsky’s magnificent score. We knew that a positive addiction was beginning to take shape.

Her first roles were as an angel and a mouse. Over the years Jenny has danced in the Russian, Spanish and Chinese Corps. She has been a little sister and a party girl.

Jenny has misted my eyes with her poise and grace while dancing in the Snow and Flower scenes. She was the lead Spanish dancer two years ago and again last year when she performed a beautiful pas de deux with Jake Karger.

This year Jenny will dance as the Harlequin in the Party scene. She will continue en pointe in the Snow scene. And during the Second Act she will dance the lead in the Chinese scene. Jenny will also sing in the choir when the Ballet opens and the partygoers make their way across the stage.

I hope readers will forgive a doting dad for making such a fuss about his daughter when there are scores of other young, talented dancers participating again this year. I’ve watched many of them mature as both dancers and as human beings. I am proud of all of them. And I will list each of their names and roles at the end of this column.

Needless to say, 2020 had been quite a year. The pandemic has taken a toll on us in so many ways. I am grateful that something good is about to happen as we make our way into the New Year.

Because of social distancing, tickets are limited to 292 guests at each of the four Nutcracker performances. But fear not, tickets are still available.

This year’s cast and their roles:

St. Augustine haunts, farm fun, not-so-spooky fun for little ones, and Halloween masquerades for adults … PUMPKIN PATCH Daily until the pumpkins are gone:…