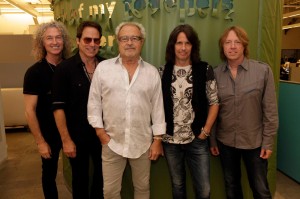 (Members of the band Foreigner) 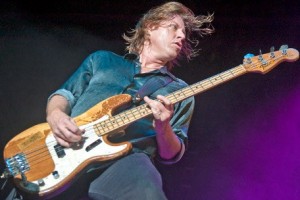 Foreigner and Styx will be on stage tonight (Friday, May 23) at the St. Augustine Amphitheatre, 1340 A1A South. Guitarist Don Felder also will be part of the show. The concert is sold out.

Foreignerâ€™s hit songs include Hot Blooded, Juke Box Hero, I Want to Know What Love Is, Cold as Ice and Feels Like the First Time, among many others.

Totally St. Augustine chatted with Foreigner bass guitarist Jeff Pilson, who once played with Dokken and also produced Foreignerâ€™s 2006 CD, Live in â€™05, and some tracks on the 2008 album, No End in Sight.

Totally St. Augustine: When did you begin playing bass guitar?

Totally St. Augustine: You starred in the movie â€œRock Starâ€ in 2001 with Mark Wahlberg and Jennifer Aniston. Tell us about that experience.

Jeff Pilson: It was as fun as it looked. The director was this wonderful man who made it fun for everyone. We had a great, great time.

Totally St. Augustine: What is your favorite part of performing?

Jeff Pilson: Two hours on stage! The traveling part is tiring, but it is all worth it when I get on stage â€¦ Itâ€™s two hours of melting and enjoying the audience. Thatâ€™s why I still do it. I love it!

Jeff Pilson: Weâ€™ll play 16 of our Top 30 â€¦ and that is our set list right there. We freshen it up at each show â€¦ we have so many songs to play for the crowd.