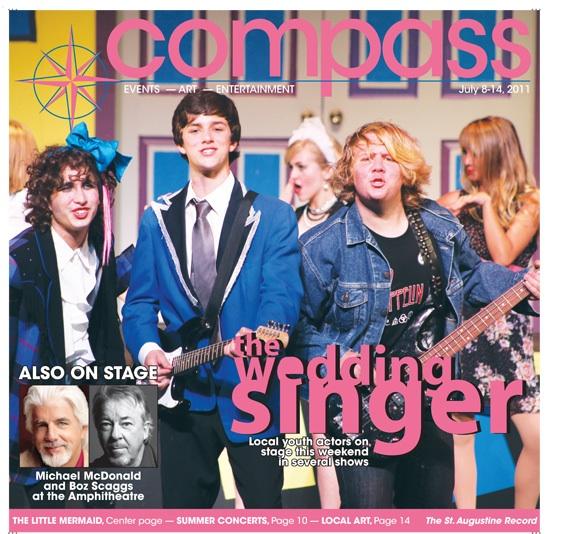 Students in the Summer Musical TheatreCamp, also known as Curtis Camp, are shown on the Compass cover (St. Augustine Record) in 2011. This year (2014) is the 20th season for this local theatre camp.

Three musicals and three one-act comedies were on stage this summer, featuring local students from ages 5 to 18. This was the 20th season of the Summer Musical TheatreCamp (SMTC), run by St. Augustineâ€™s Curtis Powell â€” a pianist and the Director of Music at Ancient City Baptist Church in downtown St. Augustine.

â€œSMTC came about because of a need in the community to educate children in the world ofÂ musical theater. We were the first in St. Augustine to offer thisÂ type of program for kids,â€ Powell said, who also plays the piano in musicals and chorus performances at St. Augustine High School and for other theatres in the area, such as Flagler Playhouse in Bunnell and First Coast Opera.

â€œI actually grew up in Ancient City Baptist Church.Â It’s a place I hold dear as my family church.Â I returned to Ancient City Baptist in 2000 and have been there ever since.Â It’s a privilege toÂ return my God-given talent in service.Â I’m very proud to be part of ACBC and hope to continue service for many years to come,â€ he said.

â€œIÂ have always been active in the local music and theater scene, and parents were asking for something forÂ their kids to do.Â Some parentsÂ were on the right track, knowing that their kids might have talent in this area.Â Others thought it would be a great way to build and boost confidence for a child. Some kids live to sing and some are the family ham or clown,â€ Powell explained.

Twenty years ago, the camp had 30 participants from ages 5 to 14. Since that time, the educational programÂ has produced 35 musical theater shows with more than 1,400 studentsÂ in participation.

â€œIt’s been an amazing journey.Â Sometimes the kids refer to the program as Curtis Camp, but I will be the first to say that the program is more than one person’s name.Â It is an institution that, hopefully, will last far beyond any of the beginning or current leadership.â€

Powell said that other north and central Florida theaters have observed the program and the guidelines that SMTC staff follow for completing the tasks of teaching students the art of musical theater â€” while, at the same time, producing large-scale Broadway musicals.

â€œThe credit goes to the multi-talented staff who, in such a short time, put on what I consider to be some of the best stage work in north Florida,â€ Powell said.

Beaman, who is the theatre instructor at St. Augustine High School, has been a part of SMTC for past 11 years.

Some camp participants have spent up to 13Â yearsÂ in the program, with several now working as professional actors throughout the country.

One of those is Chelsye Ginn, who attended the camp each year from age 5 until her senior year of high school. She currently lives in Fayetteville, Arkansas and is part of an acoustic singer/songwriter duo called Mountain Shore and teaches youth theatre classes â€”Â Â improv, music theatre and stage combat.Â

â€œMy partner and I are both trained actors and singers, and people at our shows often comment on our stage presence and expressiveness. This can be credited to actor training,â€ Ginn said.

â€œThe training I received at SMTC created a foundation of acting fundamentals that I have carried with me to college theatre studies and in the professional world. My experience with SMTC definitely helped prepare me for the work I’m doing now.”

Ginn attended the St. Johns County Center for the Arts at St. Augustine High School, then studied theatre at Florida State University and spent a semester abroad in London with working professionals in the London theatre scene.

â€œThe instructors at SMTC worked hard to bring out the best in each performer,â€ Ginn said.

â€œPerforming on the Flagler College stage was a magical experience. I think one of the best things about camp is that the production team holds themselves to high standards and brings a high level of professionalism to each show. Theatre etiquette is taught and emphasized.â€

Ginn returned to St. Augustine two years ago after graduating from FSU to direct the Sound of Music for SMTC, and was assistant director for the Rockinâ€™ Tale of Snow White.

For Powell, seeing his students grow is the best part of his summer job.

â€œThe most amazing part of the SMTC is watching talent grow.Â Over these past 20 years, we’ve seen a lot of talent,â€ Powell said.

â€œNow that we’re established we’ve seen talent go through the local high schools, do community theater in the area, and many now are in great college programs pursuing acting as a major. It’s hard to imagine that so much talent has blossomed from the little summer program.â€