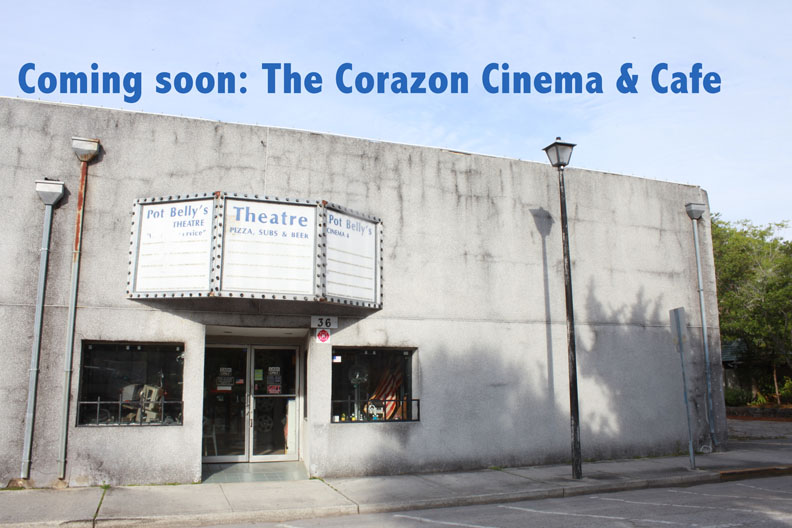 The Corazon Cinema & Cafe will replace Pot Belly’s Cinema, which closed earlier this year. The new owners are renovating the location and plan to open by end of summer. Independent films and a lunch cafe will be part of the new venue.

With her heart in St. Augustine, Karla Wagner is busy renovating Pot Bellyâ€™s Cinema, a movie house formerly owned by Kenneth Pierce, who opened the location in the early 1980s.

Before that, Pierce ran a bar and a seafood restaurant in the space, which he purchased in 1977. Some may remember the building as a feed store called St. Johns Farm and Garden Supply, owned by the parents of Vilano Beach resident Lisa Parrish Lloyd. Years before that, it was an upholstery shop and a cigar factory.

For those who had the chance to take in a film at Pot Belly’s, the memories probably include seeing the huge collection of toys, metal lunchboxes, movie posters, bicycles and other items that lined the walls. Those thousands of collectibles were sold during an auction on April 26.

The historic building at 36 Granada Street, across the street from Lightner Museum and just down the road from Flagler College, was recently purchased by Karla and her husband Bob Wagner.

The Wagnerâ€™s held a naming contest in May, receiving more than 130 emails with suggestions for a moniker that fit the updated theater.

â€œThe community has been very, very supportive,â€ Karla said. â€œIn the emails there were normally two or three names with the submission, and then a paragraph or two, sometimes a whole page, about how they canâ€™t wait for this to be a theatre again.â€

The winner was Meredith May with The Corazon, meaning heart in Spanish. Karla appreciated the tie-in with St. Augustineâ€™s Spanish heritage. For the winning name, May won tickets for an entire year to The Corazon.

Honorable mention goes to Tammy Steed, who offered â€œHeart of St. Augustineâ€ for a name possibility. She will receive movie tickets as well.

Since the film venue will also serve as a lunch spot, Wagner decided that The Corazon Cinema and CafÃ© fit her vision.

â€œOur heart and soul goes into all of this,â€ Karla said. â€œWe are doing renovations and hope to open up by end of summer.â€

She and her husband purchased a home here several years ago. They had been returning to St. Augustine every year to visit after becoming engaged here 26 years ago.

For the cafÃ©, she is hiring chefs Joe and Tami Abel from The Cheese Wheel, which is under new ownership (see Cheese Wheel story here). The Abelâ€™s have been preparing food there for 17 years.

â€œThey have quite a following with all of their food,â€ Karla said. â€œThey are going to be a big asset to our cafÃ© part of it.â€

As far as the look of the building, Karla said sheâ€™s â€œgoing to open it up more â€¦ when you come in, itâ€™s going to be welcoming and have more ambiance.â€

â€œI want a grand entrance, but with an eclectic look, brick on the walls and wood â€¦ I still want it to be old but feel that it is new too,â€ Karla said. â€œIt will be reborn.â€

There will be three theaters and Karla will be using all film equipment for now, updating to some new digital when she can afford the more expensive format.

Karla also wants to make sure The Corazon is part of the community. She has talked with Tracy Halcomb, Communications Department chair and professor at Flagler College, to establish a relationship with the school.

Sheâ€™s also spoken with Charlie Seraphin and Jennifer Zuberer of St. Augustineâ€™s 450th Commemoration. Sheâ€™d like to have a mural painted on the 125-year-old building depicting 450 years of the city.

Other plans include a beer garden and evening movie nights.

â€œWeâ€™ll just have to see â€¦ We will open it slowly and do one thing at a time,â€ she said.