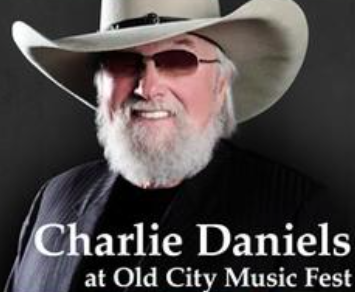 From staugustine.com // The St. Augustine Record

Music legend Charlie Daniels and his band will be on stage for a special Veterans Day performance in St. Augustine during the Old City Music Fest on the grounds of the St. Augustine Flea Market.

The event will benefit the Wounded Warrior Project (www.woundedwarriorproject.org), a nonprofit organization that helps provide programs and services to injured military service members.

Daniels is known for his fiddle playing and for his hit song, “The Devil Went Down to Georgia,” among many others.

At age 76, Daniels has been writing and performing for more than 50 years. In 1964, Elvis Presley recorded “It Hurts Me,” a song Daniels co-wrote with Joy Byers.

“I was inspired by Bill Monroe (bluegrass founder who died in 1996), Earl Scruggs, Elvis Presley, and as time went on, Duane Allman and many others,” Daniels said during a phone interview on Nov. 2 while on tour in Louisiana.

The Charlie Daniels Band, founded in 1974, helped define the Southern Rock music genre. During the start of his band, he played with Marshall Tucker, The Allman Brothers and Lynyrd Skynyrd (founded in Jacksonville).

In his song “The South’s Gonna Do It Again,” Daniels mentions Lynyrd Skynyrd.

“Yes, I have ties to Jacksonville and have played many times with Skynyrd and 38 Special (another band started in Jacksonville),” Daniels said.

He also remembers his first visit to the Oldest City.

“Yes ma’am, I went to St. Augustine in the 1950s on a school trip. I remember an ancient graveyard and I remember the Fountain of Youth,” Daniels said.

Daniels is embracing his long career, even by keeping up with social media such as facebook and twitter.

Daniels said that when he started his music career he had no idea he would still be performing at age 76.

“You just kind of keep doing it,” he said. “You are constantly changing your parameters.”

“Being from Jacksonville, we have played in St. Augustine many times,” Barnes said during a phone interview from Orlando where he and 38 Special band members were playing nine shows at Epcot.

“I remember playing at the Amphitheatre where Cross and Sword was performed.”

The Nov. 11 concert in St. Augustine will be the last show of the year for the band.

“We performed in 100 cities in 2012,” Barnes said. “This concert is a charity for the Wounded Warrior Project and Charlie is passionate about this type of thing. It is a high honor for us.”

According to Barnes, playing together with the Charlie Daniels Band is like having a family reunion.

“His band is a bunch of great guys, and Charlie is the Godfather of Southern rock,” Barnes said.

“I remember playing a show in 1976 and him busting me like a dad when we were getting too rowdy in a hotel,” Barnes said.

As far as the performance on Veterans Day in St. Augustine, Barnes said that they will be playing their hit songs, such as “Hold On Loosely” and “Back Where You Belong,” as well as a mix of songs from popular movies.

The event also will feature Coy Taylor, Craig Morgan and the band Gloriana. Morgan is a country music singer-songwriter who recently released his fifth album, “This Ole Boy.”

Gloriana is a country music group founded in 2008 by brothers Tom Gossin and Mike Gossin (both on vocals and guitar). Rachel Reinert also performs vocals and tambourine.

Taylor grew up in the hills of northern Kentucky, immersed at a young age in sounds of Merle Haggard, Johnny Paycheck and Brooks & Dunn while working in his fathers tobacco fields.

The music festival will help the owners of the St. Augustine Flea Market celebrate the 28th anniversary of the marketplace, at 2495 State Road 207, in St. Augustine.

“The Old City Music Festival is a celebration of the Ancient City and the brave service members that make our country great,” said John Alexon, co-owner of the St. Augustine Flea Market.

The 7-acre arena area houses a covered stage with state-of-the-art lighting and sound. Gates for the flea market will open at 10 a.m., with the festival arena opening at noon.

Tickets can be purchased online at www.OldCityMusicFest.com and at the gate.