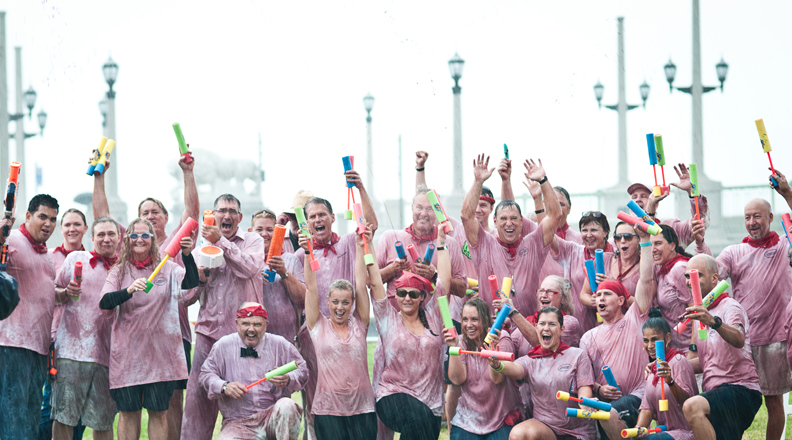 I’ve been asked to be a judge for the team competition of the Batalla de Vino (Spanish wine fight) on Sept. 13 at Francis Field, part of this year’s St. Augustine Spanish Wine Festival. The festival includes fundraising events from Sept. 9-13 in various St. Augustine locations. See other “celebrity judges” below and more on the Batalla …

The judges for the team competition include Allie Olsen with Simply St. Augustine (www.simplystaugustine.com), Lura Readle-Scarpitti with Old City Life Magazine (oldcitylife.com), and Chad Light, a local re-eanctor who portrays Don Pedro Menendez de Aviles, and me (Renee Unsworth of Â totallystaugustine.com). A fifth judge will be added soon.

The batalla consists of two parts. It begins with a team competition where each teamâ€™s goal is to PROTECT THE KING OR QUEEN! Each team of five (men and/or women 21+ years old) will try to get the king or queen of the other teams as red with wine as possible while protecting its own king or queen. The team with the whitest-clothed king or queen at the end of the competition wins. The victorious team receives a $500 check to the charity of its choice.

The batalla team competition is a perfect team building activity for companies, corporations and organizations. Itâ€™s also a fun activity for clubs, sororities, fraternities and other groups. Space is limited for the batalla team competition â€¦ there are only 10 team spaces.Â Sign up teams by callingÂ 904.209.4227Â or register onlineÂ here.Â Each team member will receive a bandanna, sunglasses and commemorative shirt â€” as well as the use of a wine squirter. Each team member also gets to participate in the individual battle after the team competition. Donâ€™t forget to think of a catchy name for your team. The cost per team is $250.

After the team competition is complete, itâ€™s time for the individuals to take the field and squirt wine on complete strangers! The battle field has barrels of wine at each corner where participants can quickly reload the squirters to never miss a minute of the batalla. The cost per individual to participate is $10 in advance online or $20 on the day of the event. Each participant will receive keepsake protective sunglasses as well as the use of a wine squirter. â€œI survived the batallaâ€Â T-shirts will be available for $15 each.

All proceeds from the Grand Tasting benefit Fresh Starts in the Culinary Arts, a program that provides homeless people in St. Augustine with relevant training and certifications that make them immediately employable after graduating from the program in the food service industry. Other wine festival events include a benefit lunch, grand tasting, and Vine Veritas (recipes & pairings). For details, go toÂ spanishwinefestival.com

Hereâ€™s a video clip about the event:

Local essential workers are featured in a 2021 calendar created by the Junior Service League of St. Augustine. In the spirit of giving back to the community, the calendar photos were taken at well known locations and landmarks in the nation’s oldest city, and funds raised will go back to nonprofits in St. Johns County.