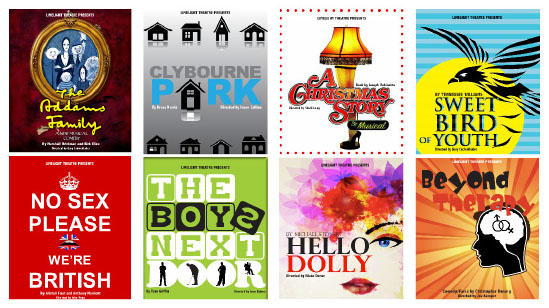 Limelight Theatre’s 2014-15 opens with The Addams Family on Sept. 18, with the musical running through Oct. 19. The eight show posters above illustrate all eight live theatre shows for the 2014-15 season.Â

Morticia, Gomez, Wednesday, Pugsley and Lurch are just some of the characters who will grace the Limelight Theatre stage this month. The Addams Family, a musical, will open the 2014-15 season at Limelight Theatre – with 8 live shows on the calendar now through August 2015.

“And Limelight actors are community volunteers who share their talents with our audiences. In the Addams Family, our youngest actor is just 10 years old.”

The other 7 shows this season include Clybourne Park, A Christmas Story: The Musical, Sweet Bird of Youth, The Boys Next Door, No Sex Please We’re British, Hello Dolly and Beyond Therapy.

The musical is based onÂ The Addams FamilyÂ characters created byÂ Charles AddamsÂ in his cartoons, which depict a ghoulish American family with an affinity for all things macabre.

Musical numbers include songs such as “When You’re An Addams,” “Where Did We Go Wrong,” “Full Disclosure,” “Crazier Than You: and “Live Before We Die.”

The Addams Family is directed by Gary Cadwallader, an actor, director and the Education Director at Orlando Repertory Theatre (The REP). Other shows he has directed at Limelight Theatre are Other Desert Cities, Spamalot, Boeing Boeing, The House of Blue Leaves, The Good Doctor, The Smell of the Kill and many more.

“The Addams Family has had an indelible impact on American culture,” Cadwallader said.

“From the original Charles Addams cartoons in The New Yorker magazine, to the 1960s television series, to the 1990s films, and the recent Broadway musical, the Addams’s are a witty representation of embracing our ‘dark’ side. Their wit and lightness take the fear out of the sinister, and redefine normal!”

An opening night dinner party will be held on Sept. 18 at Raintree Restaurant, with a themed menu and a performance of The Addams Family to follow. Tickets are $60 and include dinner, dessert and the show.