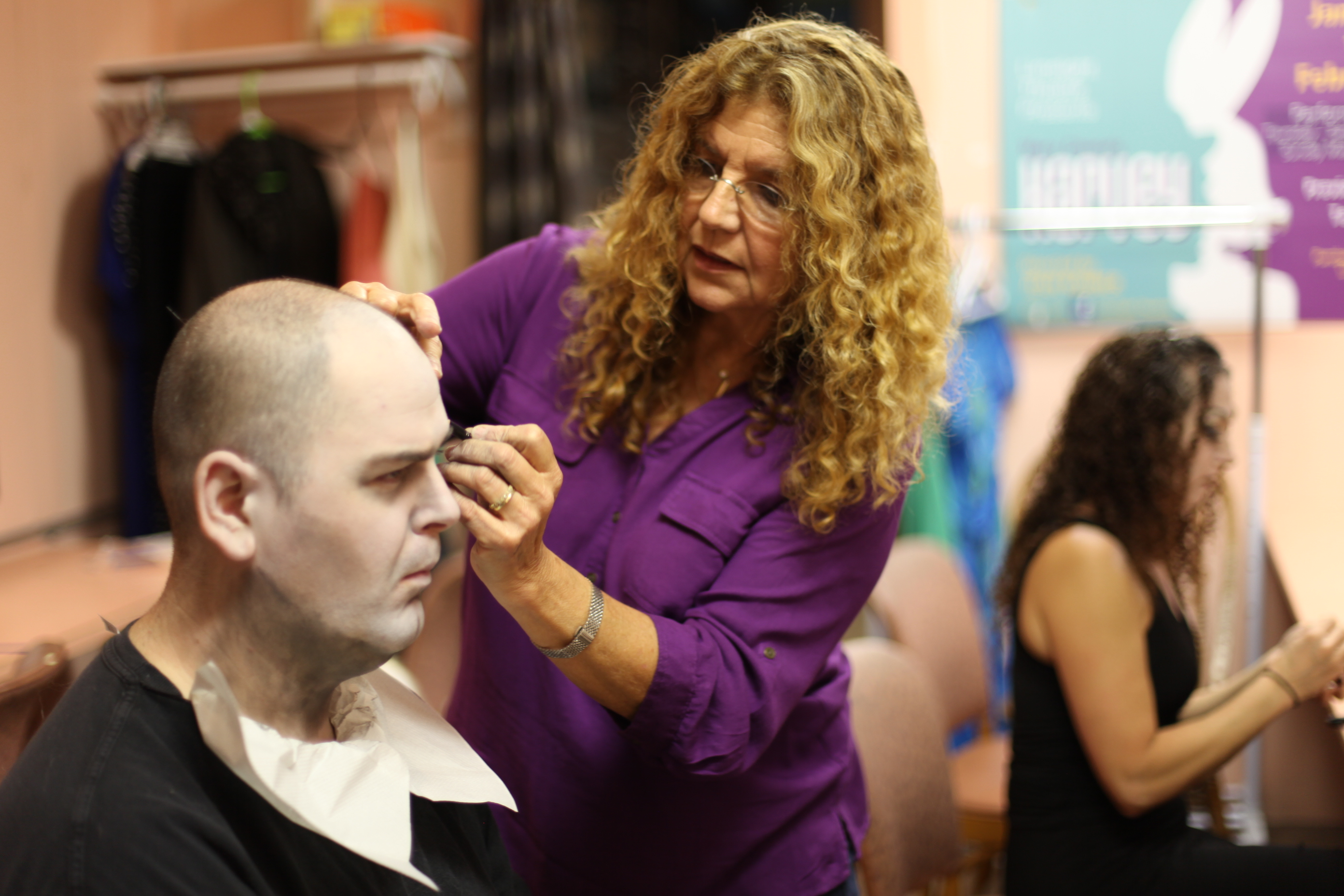 James Desmond, who plays Lurch in The Addams Family
musical at Limelight Theatre, has his makeup applied by Diane Maurno, a professional makeup artist who has worked for many years in film and TV. Photo by Renee Unsworth

Morticia, Gomez, Wednesday, Pugsley, Lurch, Uncle Fester, Grandmama and a dozen or so other characters are played by volunteer community actors â€” each who must be transformed for this particular show.

Maurno has worked with each cast member, teaching how to apply their own makeup. In order for the characters to look their part, the makeup has to be precise.

â€œI love the art and creativity of it, of course,â€ Diane said. â€œBut the talented people and the amazing places I’ve had the pleasure of meeting and experiencing have made for a very interesting and exciting career.â€

She started her career in Miami when she was hired for “Midnight Crossing” with Faye Dunaway and Daniel J. Travanti.

â€œThe film Industry is a word of mouth business. … Once I did my first film, my work as well as my work ethic, was noticed â€¦. As well as my ability to quickly solve on-set problems,â€ Maurno said.

â€œMy affinity for actors (having studied acting along the way) was another strong point that was noticed.â€

â€œOn â€˜Lonely Hearts,â€™ James Gandolfini in the makeup chair says to me â€˜My dressing room is so full of plants that people keep sending me and I can’t even walk in there. Do you want a plant?â€™ I said, â€˜sureâ€™ thinking it was a tabletop arrangement. Shortly after, I opened my trailer door to see a huge six foot tall arrangement in a gorgeous three foot tall vase coming toward me. I couldn’t even see the person carrying it. That vase still sits in my home and reminds me of James,â€ Maurno said.

Her TV credits include Aquaman, The Sopranos, CSI Miami, Special Ops Force, Walking on Sunshine, 21 Jump Street and Miami Vice, among others.

The Addams Family runs through Oct. 19. Show times are 7:30 p.m. Thursday through Saturday, and 2 p.m. Sunday.

Writer’s note: I’m a self-described foodie. I will try ANYTHING once and I have no dietary restrictions. What makes me qualified to write about…