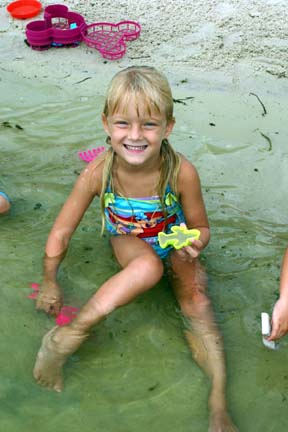 The author’s 4-year-old daughter plays at the shoreline of the Seven Seas Lagoon at the Grand Floridian Hotel in 2007.

A personal experience with knee replacement surgery in early May cooled off the writing fire usually burning within me. After seven weeks the embers began to kindle once again but alas, I found myself with a minor case of writer’s block.

Briefly I flirted with the idea of recounting the rigors and rubs associated with my recovery from highly invasive surgery. If you doubt this, go to YouTube and search “total knee arthroplasty.”

As riveting as this retrospective might have been, I was mercifully dissuaded from following through with my surgical adventure and road to recovery thanks to a horrific blunder by the Disney folks.
First let me apologize for using the word, “thanks,” even in an innocuous manner when referring to the recent alligator tragedy at Disney’s Grand Floridian property. When my daughter was 4 years old, I watched as she waded and played in the shallow shoreline waters of the Seven Seas Lagoon at the Grand Floridian.

Nine years later, I cannot imagine the degree of suffering the parents of that beautiful, 2-year-old boy went through as they witnessed their child being pulled under the water’s surface. It is something from which they will never fully recover.

I am angry with Disney not because of the tragedy itself but because of the marketing/public relations decision it made that I believe made the tragedy much more likely to occur.
Businesses providing products and services usually err on the side of overkill when it comes to warning their customers about potential dangers. McDonalds warning its customers the coffee it sells is hot immediately comes to mind.

A Razor scooter warning label puts the user on notice that the product “moves” when being used. A chainsaw warning label instructs the user to not hold it from the wrong end. The list goes on.
So what about Disney and the signage it posted on the shoreline of the Seven Seas Lagoon? It prohibited swimming and noted there was a large drop-off close to shore. Not a word about alligators or snakes. Not a word about poor water quality.

I will bet my 40+ years in the public relations business that a discussion of signage for the lagoon/beach (and similar areas on all Disney properties) came up on numerous occasions over the years. And for once in my life I wish the attorneys had prevailed over the marketing and PR folks. But they didn’t.

Let’s face it; the chance of this tragedy occurring was extremely miniscule. And that’s what Disney banked on. It allowed that miniscule chance to exist rather than muddy up the image of its properties having elements that could detract from its image of being the happiest place on earth.
Maybe signs would not have saved this child. Maybe fences would not have saved this child. Unfortunately we’ll never know because we can’t rewind the tape and have a do-over.

Obviously Disney can’t protect its guests from all possible perils. Should there be signs posted warning of disabled planes potentially falling from the skies? Probably not. Should there have been alligator warning signs and maybe a shoreline fence to hinder access to a drainage pond from which reptiles are regularly removed? I think so.

Disney has used logarithms and the like to calculate maximum fees it can charge at certain times of the year in its quest to maximize revenues.

I would like to see Disney develop a logarithmic program to maximize safety for its guests and worry just a little less about its happy image.

Evan Gray will play Pugsley at Limelight Theatre before holiday show By RENEE UNSWORTH At age 10, most kids have no idea what careers…