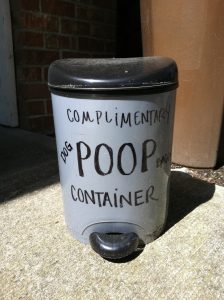 As beautiful as St. Augustine is, it is not exempt from petty annoyances that somehow manage to get my goat.

I try not to involve my wife and daughter when someone or something captures my billy, but I’ll be the first to admit that I’m not especially good at this. If you don’t believe me, ask them.

I find if I save up these petty annoyances and write about them once a year or so, it becomes very therapeutic and I can once again sleep at night.

I love the neighborhood where I reside and have managed to peacefully coexist with my neighbors and friends who, at any one time, might serve on our homeowners’ board.

I myself served on the board 20 years ago but abruptly resigned when I refused to force a neighbor to remove a beautiful wooden swing set from his side yard because the rules said such sets should be placed in the backyard unless the board granted an exception.

Today many pets, including our two dogs and others, inhabit our neighborhood. Most residents are rightly concerned about owners picking up animal waste and almost all of us do so.

For the past several years the homeowners’ board had become part of the solution by placing a trashcan outside the rear of our community center where many of us would deposit our tied-off treasure bags.

A short time ago a new board was installed and the president decided this was an accommodation that was no longer appropriate. This annoyed me and so I’m casting out devils by writing about it.

My dogs are a little peeved too.

I have previously written about scores of things in supermarkets capable of spiking my ire meter. Cashiers asking for contributions or asking if I’ve found everything looked for, and the posting of imaginary regular prices for fruit and produce are among these previously written-about annoyances.

My newest peeve is the misplaced (or convoluted) point-of-sale signs that can lead shoppers to believe something is on sale when it is, in fact, not. Sometimes shoppers contribute to this problem by reshelving items, but not that often.

The roadways provide a multitude of opportunities to set me off although I am pretty good at preventing my ire from evolving into rage. Most of the time I just shake my head and whisper bad words.

Drivers who think directional signals allow them to cut into traffic lanes regardless of the space or the safety involved tick me off.

I am also not fond of convoys of vehicles on the Interstate whose drivers believe that driving 90-100 mph is OK and safe. Memo to these NASCAR wannabees: It’s not.

Finally let me devote a few unkind words to the hordes of telemarketers and crooks (mostly separate groups) that bombard my home phone with robocalls and other similar solicitations.

I am on a do-not-call list. My phone-service provider allows me to block as many as 50 numbers. I also subscribe to Nomorobo, a service that stops known robocallers from connecting. Still a few of these creeps get through, although I usually can avoid them by peeking at the caller ID.

To me these folks are a simple annoyance. I suspect others are more than annoyed and either get talked into buying something they don’t need or becomes victims of a criminal scam. Sad.

That’s enough of this for one column. Besides I don’t want to set off someone who gets irritated when a somewhat opinionated online columnist gets all whiney.

Stream 129 independent films from your own device January 14-24 The Saint Augustine Film Festival is going virtual in 2021. The 11th annual event…