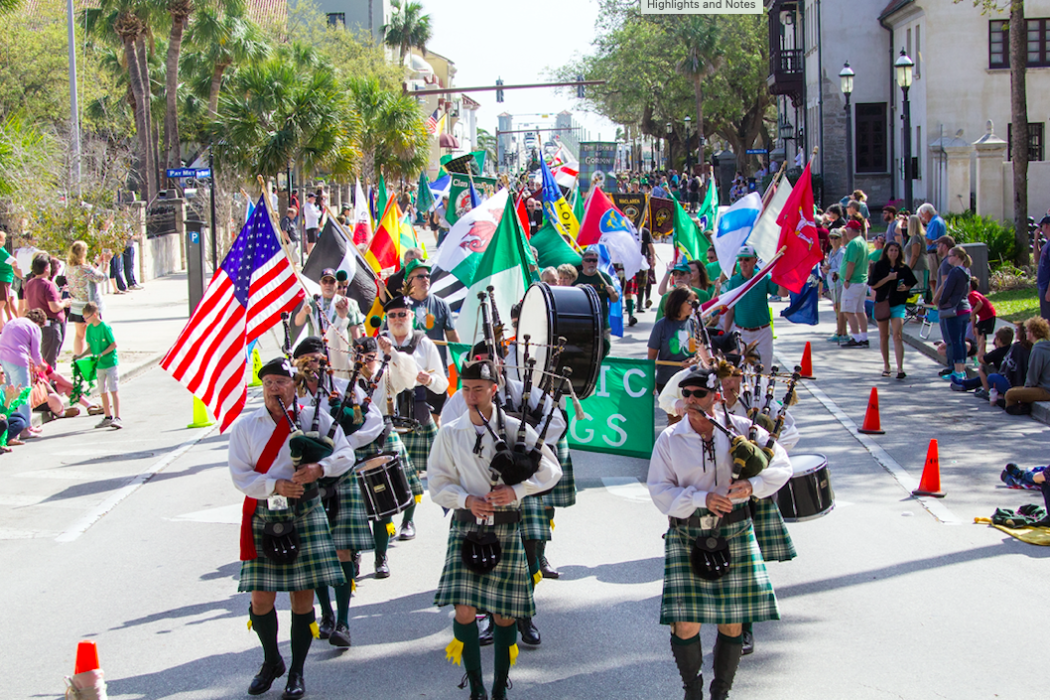 Top international and U.S. Celtic bands, Highland Games, workshops, lectures, Celtic food and artisan crafts will be feature. The St. Patrick Day parade will be featured on Saturday, March 11 and a special whiskey tasting event will be held Friday, March 10. The Celtic Music & Heritage Festival and activities will be held at Francis Field, 29 W. Castillo Dr. in historic downtown St. Augustine, Florida. The events are produced by Romanza-St. Augustine, Inc.

Tickets for the festival may be purchased online at www.celticstaugustine.com/tickets or at Ann O’Malley’s Irish Pub, 23 Orange Street in St. Augustine, and during the festival at the gate. The Whiskey Tasting begins at 6:30 p.m. until 9 p.m. with a variety of offerings and acoustic music by The Steel City Rovers. Whiskey Tasting limited-seating tickets are available online only.

Tickets include a variety of entertainment options for both days. Vendors will offer Celtic cuisine along with a variety of food and beverage, as well as handmade and imported Celtic crafts. For more information about the Festival and St. Patrick Parade, visit the website at www.celticstaugustine.com.

According to Pat Syeles, Festival Director, the events were first produced in 2011 and have increased in significance and attendance with awards for Best Music Festival and Best Food Festival in northeast Florida. The music of the Celtic people of Scotland and Ireland, and the seven Celtic nations will be celebrated in St. Augustine, America’s Oldest Celtic City founded in 1565 by Spanish Celts.

St. Augustine’s four centuries of Celtic heritage will also be highlighted during the Festival’s Highland Games on March 11-12 starting at 10 a.m. at Francis Field with athletes demonstrating and testing their strength and endurance, and Celtic clans displaying their ancestral pride. For more visitor information and registration to compete, view the website at www.celticstaugustine.com/highland-games.

This year’s parade will feature professional bagpipe and drum bands along with local talent and hundreds of parade participants through historic, downtown St. Augustine. The Parade Review Stand is sponsored by Ann O’Malley’s Irish Pub.  For more information about the parade or to participate, visit the website at https://www.celticstaugustine.com/parade.

The St. Augustine Celtic Music & Heritage Festival and the Parade are produced by Romanza- St. Augustine, Inc., a 501(c)(3) non-profit corporation. Proceeds of the Celtic Festival help promote the arts, culture and heritage in St. Augustine, Florida. For more information about Romanza Festivale of Music and The Arts, visit the website at https://www.romanzafestivale.com.

October 2-23: This is My World exhibition on view at St. Augustine Art Association

ST. AUGUSTINE, FL — It’s been said over and over that this year has been a whirlwind of unprecedented events. October is usually the…